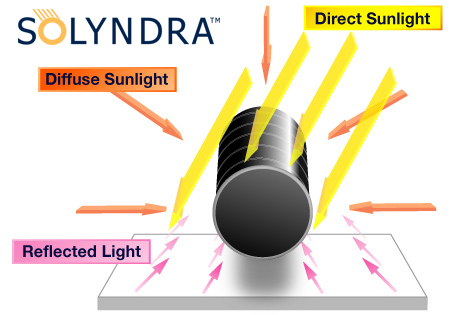 Talk of the guarantee isn’t new — in fact, the DOE extended it to the company back in March and then waited for it to raise a requisite amount of funding. The loan is expected to cover 73 percent of the cost of the plant, which is slated to produce panels for more than 500 megawatts a year (enough to power as many as 250,000 homes).

Construction of the facility could create another 3,000 jobs, the company says. Incidentally, Toyota and General Motors are closing their Fremont-based assembly plant in March 2010, leaving as many as 4,000 locals unemployed — some perhaps that will be able to find work at the Solyndra plant. After all, the loan falls under the government’s stimulus package, which carries the express goal of creating a green-collar workforce. The DOE plans to distribute as much as $83 billion in loan guarantees to alternative energy projects in the next several years.

Solyndra has previously done quite well for itself, pulling in five rounds of funding since its inception in 2005. It most recently raised $220 million in January from Argonaut Ventures, U.S. Venture Partners, CMEA Ventures, Redpoint Ventures and RockPort Capital Partners.

The ceremony featuring Biden (by Satellite) and, governor Arnold Schwarzenegger and Chu (in person) is took place this morning. The governor used the event as a platform to push California Assembly Bill 1111, which would eliminate sales tax on cleantech manufacturing equipment for companies like Solyndra. The legislation could go a long way toward attracting a green tech tenant for the abandoned Toyota-GM plant.

“We have adopted policies in California that have driven demand for solar and other renewable technologies, and our businesses and entrepreneurs are rising to the challenge,” Schwarzenegger said. “Projects like this are exactly why I supported President Obama’s Recovery Act – because this funding will create thousands of jobs, stimulate our economy and move us closer to our clean energy goals.”