Social game startup Gowalla has defied the conventional wisdom that there’s no venture capital available and that businesses today need to prove a profitable revenue model to attract investors. The 11-person Austin-based company has secured an $8.4 million second round of funding atop the $2 million the company raised in 2008.

The company’s iPhone app takes the “where are you now?” factor of, say, Foursquare, and turns it into a more blatant game. In a demo video on the company site, one of the staff checks in at an Austin barbecue joint. Should he spot one of several items to find onsite — someone wearing a cowboy hat, or a plate of ribs — he can add those to his Gowalla profile. The game is, of course, a way to prompt members to announce their locations.

The round was led by Greylock Partners. David Thacker of Greylock has joined Gowalla’s board of directors. LinkedIn founder Reid Hoffman is joining as a board observer. Other investors include Shasta Ventures, Maples Investments, plus angels Ron Conway, Kevin Rose, Chris Sacca, Jason Calacanis, Shervin Pishevar and Gary Vaynerchuk. 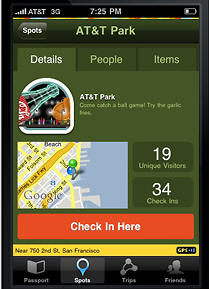 Why are investors betting on Gowalla despite its lack of a revenue model? Because the company, which wisely debuted at Austin’s annual South by Southwest conference earlier this year before launching, claims to have acquired more than 50,000 members in 7,500 cities worldwide. Like Twitter on a smaller scale, it’s seen as a people magnet that, if blown up bigger, will eventually provide a way to make money from a gathered, engaged user base.

Greylock principal David Thacker told the New York Times, “For having launched ten weeks ago, it has a lot of momentum, both in the virality of the product and the number of highly engaged users.”

UPDATE: CEO Josh Williams emailed me: “While it’s true that Gowalla, as a product, has $0 revenue — as a company, we have more revenue than you might realize. Our first product, a social game on Facebook (http://apps.facebook.com/packrat) generates significant revenue for the company. Read: We know how to make cash.”