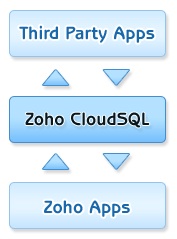 Basically, Zoho CloudSQL allows customers to interact with the data in their Zoho applications using commands in the well-known database language SQL (structured query language). Previously, the only way for third-party applications to interact with Zoho was through the commands allowed in Zoho’s web application programming interfaces (APIs). So if you have a database that uses SQL, Zoho has created a sample application that allows customers to shift data back and forth from the database to Zoho Reports (its business intelligence application) using only SQL commands.

We’re starting to edge toward acronym soup here, and it’s true that this may not be a huge deal to your average Zoho user. But the big idea is that Zoho continues to move away from treating its applications as isolated software. Instead, it’s adding ways for its applications to interact with third-party applications — starting with web APIs and now with Zoho CloudSQL — so that your data isn’t trapped inside Zoho, and customers don’t feel “locked in.”

It’s a smart strategy for a company that wants to gain traction against better-known competitors, because it doesn’t force new customers to switch over to Zoho completely. To use an example of the same principle that revolves around users, not software, Zoho also made it possible for users to log in without a Zoho account if they have a Google or Yahoo account instead.

Zoho CloudSQL is launching for Zoho Reports today, with other applications to follow. It supports all the major SQL dialects.