Start-up GrandCentral bets you have too many phone numbers and voice message boxes, and that you want to simplify things.

So GrandCentral gives you a single phone number that you can use anywhere. If you haven’t jumped in yet to use Internet phone (VoIP) services, some of its features will seem quite magical. VoIP is really coming in to its own, and Grand Central is showcasing it. The Fremont company has just launched, at the DEMO conference.

You do have to take out a new number with GrandCentral, but then you can manage it centrally online, and you’ll never have to change your number again. The idea of a central number is not new, but GrandCentral is worth a look for all the features it offers.

Simply getting a new number may be too much for some people to contemplate. But GrandCentral has made it very easy; we tried it out, and it works well. It is still in testing mode. There was a bug or two, but they were minor and should be fixed soon. You manage your calls through an online dashboard. You can choose which phones (cell, home or work) you want to route calls to, depending on who they come from. You can have the call ring to your work phone, for example, if it is someone from your general Outlook contact list (which you can import), or someone you don’t know. If it is a “friend” calling, you can have the call ring your cell and work phone; if it is your wife, you can have it ring to your home phone as well.

It centralizes all your voicemails so you can access them from the web or from any phone. You can customize greetings.

It is run by some former executives at Dialpad, the early Internet telephone company that launched with great fanfare in 1999. Dialpad was too early and struggled to make a profit. It went through bankruptcy, and was transformed by chief executive Craig Walker into an asset that he sold to Yahoo last year. Walker and colleague Vincent Paquet have now launched GrandCentral. So they are drawing on their expertise in VoIP.

If GrandCentral sounds familiar, it’s because it has a history. Halsey Minor, the founder of CNET created a company called Grand Central as a way to integrate all kinds of Web services — eBay, PayPal, Intuit — into a single platform. Despite getting $60 million in venture backing, it ran into trouble — as we reported last year.

This time, GrandCentral is a different company, but it is backed by Halsey Minor with an undisclosed amount of cash. Walker and Paquet bought the name from Halsey Minor.

There are many companies providing centralized phone services and helping you route calls to various phones. GrandCentral’s challenge will be to grab peoples’ interest amid the noise of all these offerings. GrandCentral, though, claims no other service provides the same bells and whistles. For example, it gives you a single voice messaging system, where you can store all your voice messages. It allows you to walk into your home with your cell phone, and transfer the call to your home phone without the person on the other end knowing it (you press star on your cell phone, your home phone rings, you pick it up, and the other person is on the line).

You can choose on the fly whether to take the call, or send to voice mail, depending who it is. You can “listen in” as someone leaves a voice message, just as you do on your home answering machine. With GrandCentral, you can do it from any phone — letting you jump in and take the call, for example, if you recognize the caller and decide it is important. At anytime during a call, before you pick up, or after you’ve started talking with someone, you can hit “4” and the call gets recorded on the Web vmail.

It’s all made possible by a softswitch created by veteran engineer Don Fletcher. There is a lot here, and the user will need to take some time to absorb all of the various options — but the user interface makes sense. GrandCentral has a basic tour on its site, but we’ve recommended GrandCentral produce a screencast demo to better hand-hold people through the process. We’ve provided some partial screen shots below.

GrandCentral is offering a free service for a limited testing period. It gives you 100 minutes per month to use to call out. After the testing period, or after your 100 minutes run out, it will cost $15 a month, which will cover unlimited incoming calls. 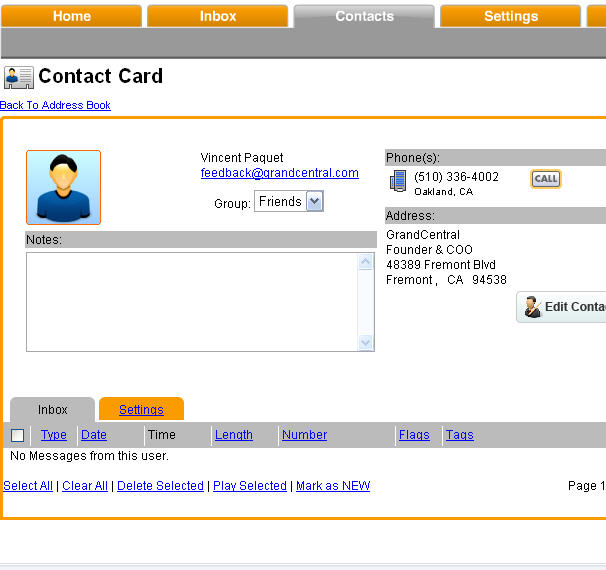