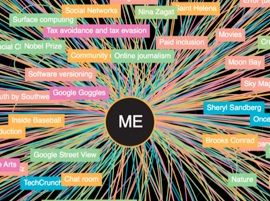 A team of former MySpace executives is launching a new company on-stage at the Web 2.0 Summit today in San Francisco. Chief executive Amit Kapur said he left MySpace, the troubled News Corp. Internet portal, because his new company Gravity presents an even bigger opportunity: Basically, it uses your interests to help you find relevant content.

That sounds similar to promises I’ve heard from many other companies, for example the content-sharing service Twine (which was acquired by Evri) and personalized news-reader MeeHive (which was shut down by parent company Kosmix).

But Kapur said previous attempts have just “nibbled at the edges” of the bigger problem. Gravity is part of the latest wave of companies trying to manage the ever-growing flood of content on the Web, he said. The first great innovation for handling all that content was search engines, followed by sharing on social networks.

Kapur argued that the next solution is embodied by music service Pandora — instead of asking users to search for music or recommending music based on the preferences of friends, Pandora plays songs that you’ll probably like, based on what it knows about your own taste and interests. Kapur said Gravity is like Pandora, but for the rest of the Web, not music.

Specifically, Gravity has built out a language model (it currently contains 100 million phrases, Kapur said) showing how different interests fit together. So Gravity knows that the phrase “free throw” is related to basketball, which falls under the broader category of sports. Then for each user, Gravity can build out an “interest graph” of everything you seem to be interested in based on public social network content — your messages on Twitter, your check-ins on Foursquare, your status updates on Facebook, and so on.

Gravity is launching its first product today, called Twinterests, which builds an interest graph based on user’s tweets and allows them to compare those interests to their friends’. Coming soon is The Orbit, a personalized Web newspaper.

These are really just demonstrations of Gravity’s technology, however. In the long-term, Kapur said he wants to turn Gravity into a service for Web publishers to personalize content for their readers. Imagine coming to VentureBeat and hitting a “personalize” button, then watching the page rearrange itself to highlight the stories that are of greatest interest to you.

Gravity has raised $10 million from August Capital and Redpoint Ventures. 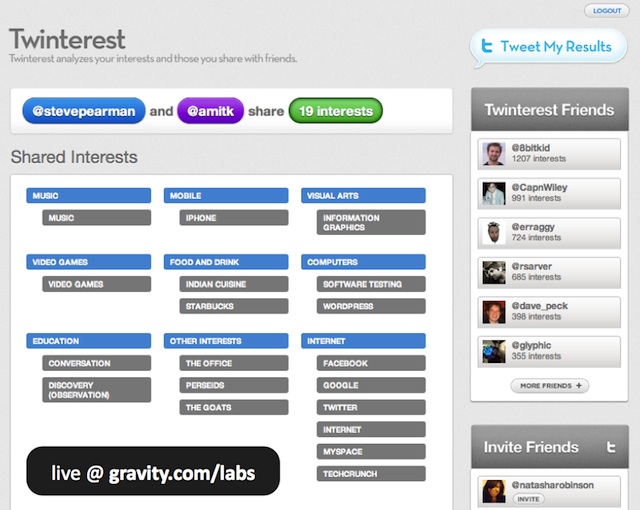