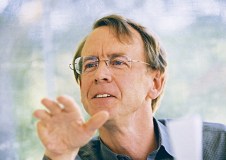 “Ten years out we want lamps that use 2 of percent the energy [they’re usually using now] and put out the same amount of light,” Doerr said at the beginning of his talk at GreenBeat 2009 today — indicative of his interest and that of his firm, Kleiner Perkins Caufield & Byers in the newest, boldest investments when it comes to cleantech and the grid.

He began the conversation with VentureBeat editor Matt Marshall by comparing the evolution of the Smart Grid to the initial, disorganized adoption of the internet. At the same time, he acknowledged how different grid and cleantech investing is than previous areas of focus in the Silicon Valley. Chiefly, most companies in the space that are looking for funding require a lot more money and time to get where their going. He gave distributed energy startup Bloom Energy as a prime example — seven years into it, Kleiner is still backing it, but it has yet to emerge from stealth mode. “Instead of companies looking for $20 million, they need $250 million,” Doerr generalized.

He said he recognizes that venture capitalists still have the responsibility to make money, but that the stakes are much higher than that. Following the release of Al Gore’s Inconvenient Truth, Doerr said he was gauging people’s reactions to the film, and his daughter very candidly told him, “Dad this is your generation’s fault and you better fix it.” Speechless, he went back to his partners and asked them what they were going to do about the situation.

Since then, Kleiner Perkins has grown its cleantech practice into one of the biggest and most influential in the venture capital community — on a national, not just Silicon Valley level.

When asked what advice he had to offer to investors scouting the Smart Grid space for the killer apps and hottest investments, Doerr said it’s important not to assume that the economy is going to get any better than it is today. It’s important to work within current constraints, while still looking forward.

He said that the tight economy is certainly sending ripples through the Smart Grid investment structure, in addition to the fact that the federal government spent less than $1 billion on research and development in the whole cleantech sector last year. That said, he has confidence in the Obama Administration to make the right moves in the coming years to build out a cleaner, more effective grid.

“We’re at a moment in time when we have a president with a very clear agenda around green,” he said. “And he has built an absolutely A team, from Steven Chu to Carol Browner to Cathy Zoi, and he knows how to manage and get things done. I know the team is good, but I’m still sobered by how hard it is to reach policy that’s going to work.”

Beyond that, he said that Silver Spring’s success has been built largely on its top-tier crop of partners and supporters, a group that includes major utilities like Florida Power & Light and Commonwealth Edison. “Bringing together these kinds of players takes the kind of organization that also pays a lot of attention to the needs of customers,”  Doerr said.

He said that Kleiner’s experience with Silver Spring has taught it how different it is to work with grid companies than typical Silicon Valley investments. “We’re not accustomed to this in the Valley — we’re used to creating a product, putting it up on the web and selling it over and over.” Instead, much of Silver Spring’s success depends, and will continue to ride on quick evolution and consistent growth.

Doerr, armed with a white board and dry-erase markers, then fielded questions from the audience.

Responding to whether the Smart Grid will create jobs, he offered an unequivocal “Yes… the only thing more important from a policy point of view is to put a price on carbon.” He says that he has lobbied time and again for that price to be set, arguing that doing so will open the floodgates on a host of cleantech innovation, which in turn will generate more jobs.

He also backed the concept of decoupling — the separation of utility revenue from the amount of energy they deliver. By instituting these policies, utilities will be freed up to become active proponents of conservation, with the power to launch very influential energy-saving programs. He said he is interested in seeing what Jim Rogers will say on this topic later in today’s agenda.

Airing his opinions on California state policy, Doerr threw his support behind Assembly Bill 32, designed to make major cuts in the emissions of greenhouse gases statewide. He said that gubernatorial candidate Meg Whitman’s promise to repeal the law gave him great pause — especially because she is making the argument that it will hurt employment in California, which he says is plain untrue.

He highlighted Denmark as an illustration of how employment is consistent with aggressive climate legislation. The country’s unemployment rate remains incredibly low, while it exports hordes of wind turbines every year. “Denmark put a price on carbon, and that encouraged investment,” Doerr said.

He capped off his talk by saying he is very concerned about the U.S.’s position in the global cleantech business. America only has about four companies in the upper echelon of cleantech companies, spanning solar, wind, advanced batteries, and more he said.

He concluded by giving his email out to the assembled crowd. So if you ever want to bend John Doerr’s ear, you can reach him at jdoerr@kpcb.com.