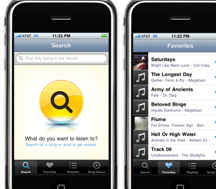 Just 10 days after its release, the iPhone app of music-streaming service Grooveshark has been pulled from Apple’s App Store due to a complaint received from the British arm of Universal Music Group, the app’s maker said in a blog post Tuesday.

Grooveshark, whose website promises “free Internet radio stations,” could be seen as competing with Apple’s iTunes Music Store, which depends on the cooperation of major music label groups like Universal.

The app was originally submitted a year ago, but repeatedly rejected for what the company claims were “primarily selfish reasons” on Apple’s part. After spending a year tweaking the app to get it through Apple’s stringent approval process, it was accepted on August 8 to much fanfare by users of the service.

Grooveshark said the app was taken down in response to a complaint Apple received from Universal Music Group UK, which has been known to be in a contract with rival Internet-radio service Spotify.

Unlike competing services like Spotify, Rhapsody, and Rdio, Grooveshark’s service works by relying completely on users to upload and manage a catalog of songs. In an attempt to avoid legal troubles, the company has actively looked for licensing agreements with record labels in the past and polices its catalog by obeying takedown requests. Its only major licensing agreement to date, however, has been with EMI.

On its blog, Grooveshark states that it is committed to getting the iPhone app back in the store and into hands of its iPhone users. Versions for other platforms, like Google’s Android and Research In Motion’s BlackBerry, remain available.