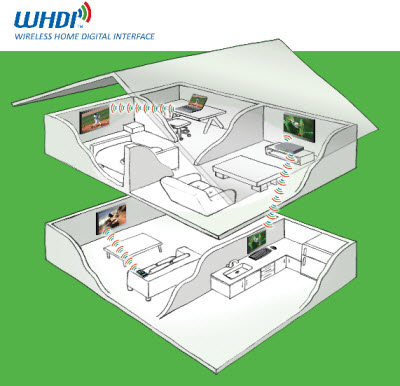 Consumer video sources are multiplying in our homes. Blu-ray players, set-top boxes, game consoles, desktop PCs, laptops, netbooks and other devices are proliferating. But they haven’t been easily connected, making it hard to get video from one device to another.

That’s why a group of tech industry players formed the Wireless Home Digital Interface (WHDI) consortium, and they’re announcing today they have created their first approved standard for transferring video wirelessly from one device to another within the home. WHDI will let consumers connect devices so they can transfer video in 1080p resolution, a high-quality high-definition TV format. It sends videos at a speed of 60 frames per second, or 3 gigabits of data per second.

With a WHDI network in a home, it becomes easy to take video that comes into your cable set-top box in the living room and play it in the bedroom. You could also play different videos in different rooms of the house at the same time. The WHDI 1.0 standard has been in the works for more than a year; the announcement brings us a step closer to the dream of the networked wireless home.

Now manufacturers can make devices that include the WHDI connectors. The wireless devices will have a range of 100 feet and be able to penetrate walls using the 5 gigahertz section of the wireless spectrum. That’s about the same range as standard WiFi devices, but WHDI should be able to deliver video far more reliably. Other rival technologies can’t penetrate walls as easily.

Supporters include Motorola, wireless chip maker Amimon, Hitachi, LG Electronics, Samsung Electronics, Sharp and Sony. The rival WirelessHD standard has different technical specs and is supported by Broadcom, Intel, LG, Panasonic, Philips, NEC, Samsung, SiBEAM, and Sony. Yes, that means some companies are hedging their bets by supporting both standards. Consumers will determine which one prevails.