Groupon reported its fourth quarter 2012 earnings today almost exactly where analysts had expected: With $638 million in revenue, up 30 percent over last year.

The problem was that analysts wanted a profit.

“Record billings growth this quarter is a clear signal that customers love Groupons,” said CEO of Groupon Andrew Mason, focusing on the positive. “We will continue to invest in growth through 2013 as we see new opportunities to give our customers what they want.”

Above: Groupon shares fall like a rock in after-hours trading.

Last quarter was a disaster for Groupon, driving its stock down nearly 20 percent on missed revenue and poor international performance, although it had grown subscribers 37 percent year-over-year to 200 million. This quarter is looking much the same for the Chicago-based daily deals frontrunner.

The sad part if you’re a Groupon shareholder?

There’s a lot that’s going right in Groupon’s market. The company’s active customer count hit 41 million, up 22 percent. Groupon Goods, the high-flying physical goods part of the company’s business, is still growing and now at an annual run rate of $2 billion. Active deals in North America were up 300 percent to almost 37,000. Mobile is booming for Groupon, with nearly half of its transactions happening via mobile devices in January, up 44 percent from January 2012. Total Groupons sold were up 21 percent year-over-year in Q4, and 19 percent quarter-over-quarter.

And yet, there is this oddly desirable quality of successful businesses that Groupon lacks: profitability. 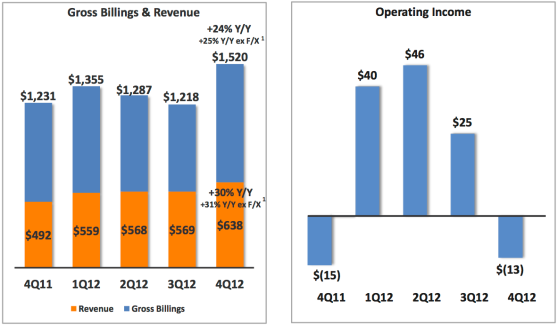 I’m no financial genius, but I’m guessing the graphic below tells the story. Groupon’s cost of revenue has increased every quarter for over a year, from 20 percent of revenue in the fourth quarter of 2011 to 32 percent in the third quarter of 2012 and a massive jump to 44 percent in this most recent quarter. While marketing costs have steadily gone down, rising cost of revenue numbers like these are not going to make investors happy. 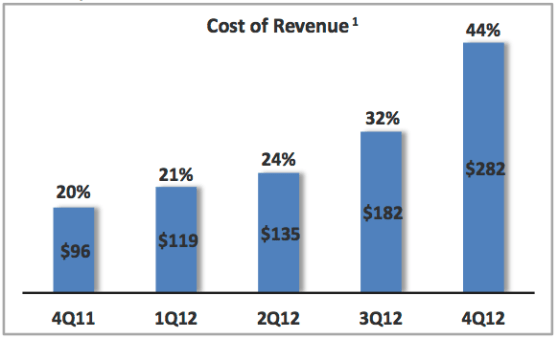 Above: Groupon’s cost of revenue.