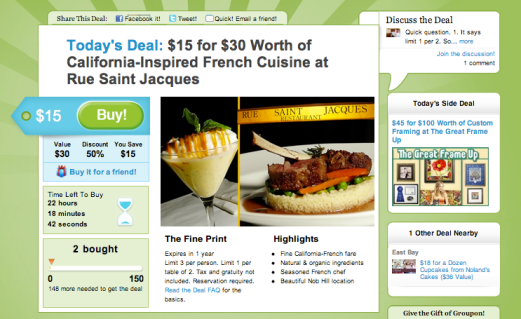 “It was a collective action forum for people to solve problems they couldn’t otherwise fix,” said Eric Lefkofsky, who funded ThePoint. “We did that for 18 months and we originally thought the site would garner enough traffic that we could sell ads. It just wasn’t happening.”

So the team began experimenting with a new idea. The thesis of ThePoint had been that collective action happened once an idea reached a “tipping point” when enough people had pledged to do something or give money. The Web could naturally make this happen a lot faster. But ThePoint’s model didn’t seem to be paying off.

What if that idea was applied to commerce? Mason, Lefkofsky and other ThePoint employees started with a modest plan; they created local deals of the day with bars, restaurants and spas. If enough people signed up, the deal was on. Hence, Groupon was born.

Fast forward a year and a half later. The company just pulled off a $135 million round with late-stage Russian investment firm Digital Sky Technologies with a valuation reportedly topping $1 billion. Just to put that in perspective, Twitter reached its $1 billion valuation after three years of existence and Yahoo’s reported $1 billion offer to Facebook came when the company was two years old.

Groupon’s deal volume is up 300 percent since the end of last year, when the company had served approximately 1 million money-saving coupons. Four months later, the company has served 4.1 million. Asked whether reports of $350 million in annual revenues were accurate, Lefkofsky, who is now a Groupon board member, initially declined to comment, but then said, “Obviously, one would consider that $350 million number extremely high. And our sales are … extremely high.”

The funding round marks an astonishing coming of age for social buying. When I first wrote about social buying last summer, I said it was an important trend that tacked on an additional functioning revenue model to social networking. Today, it’s a veritable phenomenon. Groupon’s closest rival, LivingSocial, raised $25 million last month. The company has spawned about 70 U.S. based competitors, according to Yipit, a search engine for such daily group deals.

“This is a landscape where you’re going to have hundreds of companies operating within many geographies and verticals,” said Yipit cofounder Vin Vacanti. “Groupon will dominate the market, but it’s impossible to prevent others from competing with them. The nature of the service is that it’s inexpensive to start.”

Because it’s so cheap to launch, there’s a real race to scale the model and own the concept as a brand. Groupon and LivingSocial have both built viral loops into the product — referring friends means discounts or even free deals.

“This is really a new form of local advertising,” said Tim O’Shaughnessy, LivingSocial’s chief executive. “It’s certainly a virgin market. I don’t know if most people would consider this mainstream.”

So where could social buying market go from here?

“Consumers only spend roughly 80 percent of  their disposable income within five miles. There are a lot of consumers Groupon is not touching in their core markets yet,” said Roger Lee, a general partner at Battery Ventures, which also participated in Groupon’s latest financing round along with DST. “There are big markets being created at the intersection of local commerce and the social graph.”

There will also be more vertical takes on the model — think Groupons for moms or pet owners. Blackboard Eats, for example, is a restaurant-focused take on the model. Still other startups are adding game mechanics like Homerun, which lets users accumulate and redeem points the more they interact with the site. The site also has intriguing “Avalanche”-style deals where the discount actually deepens the more people join an offer.

Niche media sites could also enter the fray, as blogs that have spent years accumulating millions of unique visitors look for alternative ways of monetization.

Groupon is also planning to expand internationally; it opened in Toronto this week. Group commerce really isn’t all that foreign to some markets. In China, there’s a practice of tuangou or team buying. It’s a cross between bartering and a flash mob. A group of shoppers will physically show up at a store, ask for a discount and threaten to leave if their demands aren’t met. That’s a model that could easily (and less intimidatingly) be taken online.

Some of the scaling strategies Groupon plans to avoid are also interesting. Lefkofsky said that a self-serve system for offering deals may not be on the horizon. Part of the model’s success has to do with artificial scarcity and urgency. If too many deals are offered without any time limit, there isn’t a psychological trigger to push consumers to buy. There’s also a crucial element of taste.

“We have looked at a lot of firms with automation. But we think it’s critical to have curation. Otherwise it becomes a flea market which isn’t productive,” Lefkofsky said. “One of the reasons these deals are successful is that we don’t put every we interact on the site. We’re picking the best of the best.”