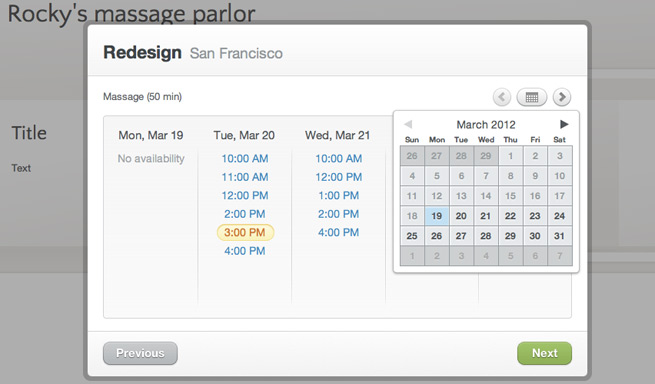 Groupon today launched a wide beta of its Groupon Scheduler product. The Scheduler is an online calendaring tool that allows service businesses such as spas, yoga studios, contractors and photographers to take reservations online. It’s open to all merchants, not just companies that run deals with Groupon. The daily deals company is billing it as a “free trial,” and it’s unclear whether Groupon will eventually charge for the service. Groupon did not respond to two requests for comment on this story.

How the Groupon Scheduler works

Scheduler allows customers to see availability, book a reservation, and get a confirmation email. I created a dummy spa business that lets consumers schedule massage appointments with “Jill.” Feel free to schedule an appointment (but you won’t get a massage.) Scoll down and click the “Book Now!” link at the bottom left side of the page to trigger Scheduler.

Overall, the product is fairly competent and handles simple-use cases well for a beta product. I generally like the management screens on the merchant side as well. The big complaint I had about the product’s user interface was that I couldn’t find a way to point people directly at a booking screen; it seems that Groupon only provides a script link that merchants can embed in their own sites. (That’s why my fake salon has such a clumsy Web page to trigger the booking process.) Many merchants won’t have the technical expertise or resources to do this.

For those that do, Groupon Scheduler provides a “good enough” solution that tackles the basics. More established businesses will likely want to use a dedicated system from a vertical solutions provider like MINDBODY for yoga studios.

But there are a couple of big IFs that need to be answered before I’d recommend businesses start using Scheduler.

Who owns the data?

It’s not clear who owns the data that is in Groupon Scheduler. Can Groupon take a spa’s entire customer database and start marketing competing spa deals from other providers? That would be wrong, but I couldn’t find any terms and conditions that say it won’t. Groupon PR did not respond, and I haven’t yet heard back on a request I sent to customer service.

For a service that is as essential to a business as scheduling and captures personal data, I found it extremely unusual that I couldn’t find an agreement anywhere on the Scheduler site that explains Groupon’s rights and responsibilities.

Until Groupon clarifies what it will do with the data that merchants and their customers enter, I recommend against companies adopting Scheduler.

Will it benefit Groupon customers and hurt regulars?

The other important question is whether Groupon Scheduler just ends up as a boon to regular Groupon customers at the expense of a merchant’s regular customers. As I wrote when discussing Groupon’s whale problem, the business needs of Groupon are often fundamentally at odds with the business needs of the merchant proving the service.

The optimal scenario for a merchant is to make fewer spaces available to discounted customers than full-price customers. In Groupon’s case, this would mean the best product for its merchant customers would treat its deal customers like second-class citizens. I couldn’t find a way to do this in the Groupon Scheduler interface. (The help files do suggest that businesses could use pen-and-paper for regular appointments and only make Groupon inventory available online.) That’s a fundamental conflict that is hard to reconcile.

One of the bigger complaints about Groupon and daily deals in general is that it can sometimes be hard to redeem offers because businesses are too busy. I’ve heard complaints that the next available slot for a house cleaning daily deal was four months later. Groupon Scheduler would make it more efficient to make those appointments. But because Groupon regulars are more likely to know about these tools then a merchant’s regulars, it has a high likelihood of displacing full-priced customers. Groupon could advise merchants to block off space in advance of a Groupon run (as I do in my best practices for running a daily deal), but that goes against Groupon’s interests.

The first of these concerns is resolvable; Groupon needs to make it clear to businesses that the data they enter about customers and their activity will not be used for Groupon’s other businesses. The second concern is a lot trickier.

Until these concerns are resolved, it’s best that merchants hold off on a booking a date with Groupon Scheduler. 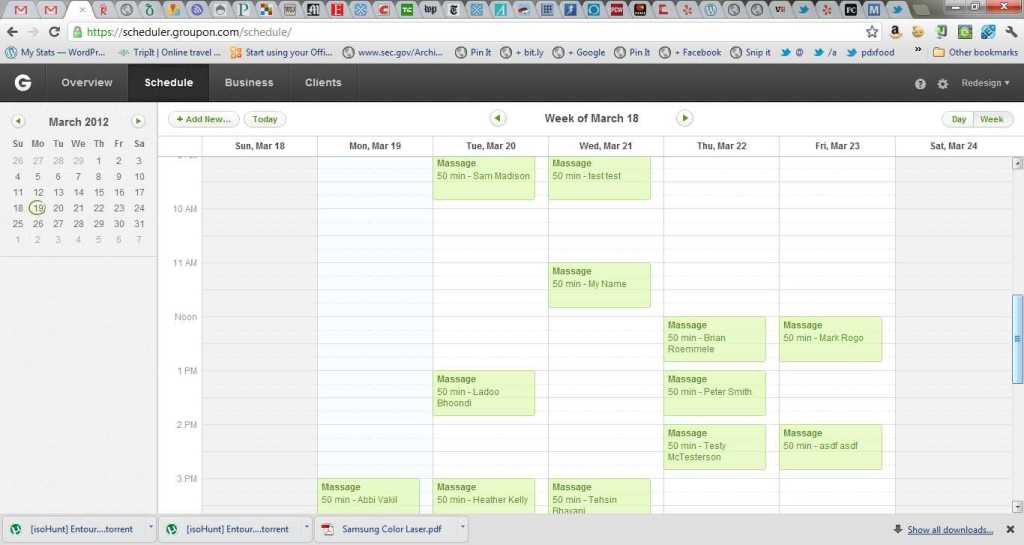 Above: Click for a larger view of the back-end interface for the Groupon Scheduler.