On the one hand, small-to-medium-sized businesses (SMBs) have access to a number of affordable tools to run their shops.

On the other hand, their data is buried deep inside each of those tools.

A Provo, Utah-based startup called Grow is launching its platform out of a private beta today, offering business intelligence (BI) dashboards that surface the key data from those tools.

Founder and CEO Rob Nelson told VentureBeat he got the idea for the dashboards when he was running his previous company.

Called Logica, it developed software to analyze shipping logistics and pricing for enterprises — but was handling its own data tracking through spreadsheets. Each month key data from Salesforce.com, QuickBooks, Marketo, and other common SMB tools was manually entered.

“Updating our spreadsheets was a nightmare,” he said. The spreadsheets were used to find out if all sales efforts were meeting targets, what the current cash balance was, and other useful metrics.

So, Nelson went looking for an affordable and useful data tool.

“What we found,” he said, “was there were a few entry-level companies that provided [some status data], then there was a huge gap, and then there were enterprise BI providers.”

At the low end, he said, there are such providers as Geckoboard and Ducksboard. At the high end, companies like Domo or Tableau.

A typical enterprise provider like Domo, he said, charges an annual fee of about $50,000 — far outside the budget for SMBs.

After he sold Logica, Nelson looked to fill the gap he found. Grow’s service, which ranges from $39 to $1000 monthly depending on number of users and dashboards, allows companies to readily access the data in more than two dozen common tools, including Salesforce.com, Zendesk, QuickBooks, and others.

Grow says a dashboard can be up and running in half an hour or less. The target company, Nelson said, has annual revenue of $1 million to $50 million, and between 10 and 30 employees.

Templates for KPIs (Key Performance Indicators, or metrics a company uses to gauge itself) can be dragged and dropped onto a dashboard, which will then populate the KPI with appropriate data. Users can access the data in their Salesforce, QuickBooks, Google Analytics, MailChimp, and nearly two dozen other tools simply by entering their logon credentials into Grow, which allows the platform to pull data via the API. 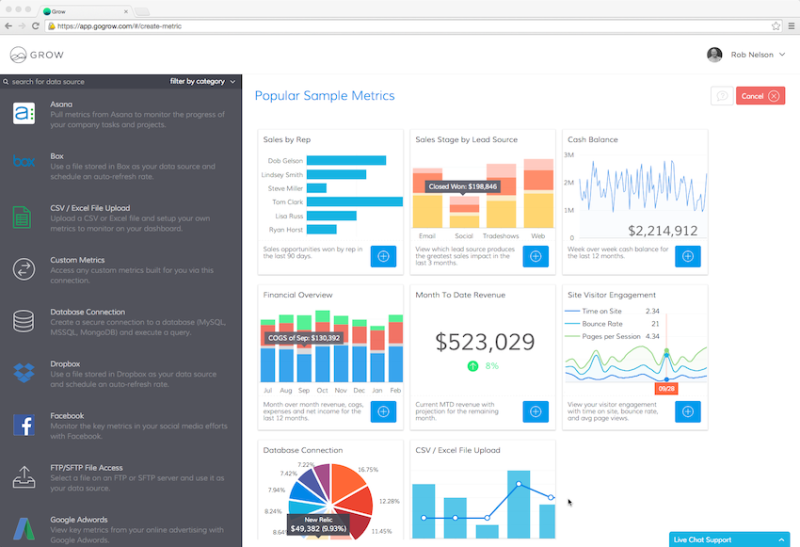 The company said a business might typically be looking for quick access via a dashboard to such information as:

Mashups of data between different tools can also be presented, although that requires a company either to customize a dashboard or hire Grow for that additional service. Dashboards can be managed to limit access, such as allowing the whole company to see some stats but only execs to see others.

This is not Big Data analysis, Nelson pointed out, where data mining can discover relationships you barely knew to ask about.

“What we’re doing is small data,” he said, finding “actionable insights, looking at trends,” without having to dig through the tools.

In addition to its launch announcement, Grow is also announcing that it has raised $1.5 million in seed funding from investors that include Kickstart Seed Fund, Pelion Ventures, and Aaron Skonnard of Pluralsight. Nelson said the funding will be used to build out marketing/sales and service integration teams and to define the product.