Andrew “Bunnie” Huang is a hacker who can’t get enough of hardware. So he is publishing a book, dubbed The Essential Guide to Electronics, that will help hardware creators and hobbyists, or makers, navigate the massive supply chain in Shenzhen, China. The book will make it easier to expand the do-it-yourself hardware movement, known as “maker,” that is gaining increasing traction around the world among tech savvy innovators.

Huang, who hacked the original Xbox and created a cool open-source (NSA-proof) laptop last year, put up a post on his blog about his new crowdfunding campaign to publish the book. In just a day, he was able to raise $18,000, far above his goal of $10,000. That may be thanks in part to a very nice endorsement.

Edward Snowden, the man who leaked the U.S. government’s secrets to the world, is an electronics geek.

In support of the book, Snowden tweeted the following:

If you’re a hardware hacker or maker, this might be the coolest reference book of the year. https://t.co/4NPpTHpJhC pic.twitter.com/Um9ok1CBpn 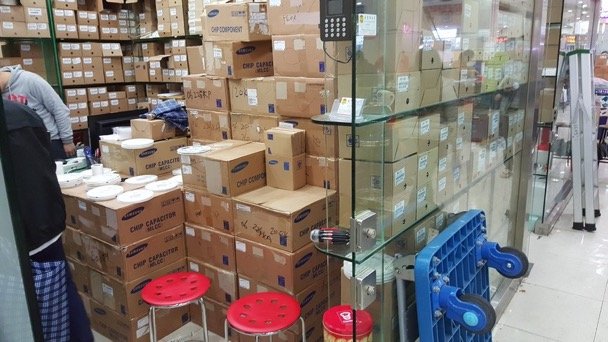 Above: Electronics market in Shenzhen.

Huang has years of experience working with manufacturers in Shenzhen, and he describes the book as something “I wish I had when I first stepped foot into China a decade ago.”

“I learned about supply chains and how to mass-produce hardware. Over the years, I’ve blogged about my experiences in Shenzhen: ‘MLTalk with Joi Ito, Nadya Peek and Me’ and ‘Products over Patents’, and given tours of the markets to parties ranging from graduate students at the MIT Media Lab, to VCs and executives,” Huang wrote. “I’ve spent a lot of time on the ground in Shenzhen figuring out how to build my (often quirky) pet projects, ranging from my own version of a Shanzhai phone to a bespoke ARM-based laptop, to interactive conference badges that encourage participants to breed unique light patterns through virtual sexual reproduction.”

In particular, Huang said the Hua Qiang electronics market in Shenzhen has been an enabling resource for him, but that he had to overcome the language barrier. If you need a ton of connectors and switches, Huang tells you how to get them, and he has advice about how to tell if any components are fake.

The book will be published on paper. The campaign finishes on March 18, and Huang hopes to have the final proof around March 7. The paper books could be out in June.