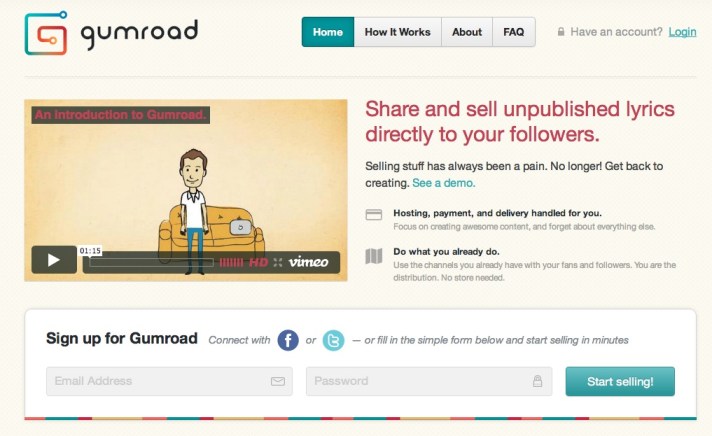 The round is led by Kleiner Perkins with partner Mike Abbott joining Gumroad’s board. CrunchFund and Raymond Tonsing are in the round as well.

This comes just months after the company’s official launch in February, when it announced their $1.1 million seed round led by Accel Partners, Chris Sacca, Max Levchin, SV Angel, and others.

We spoke with Gumroad founder and chief executive Sahil Lavingia about the funding and future plans for the company.

Lavingia, who is only 19 years old, is a fast-rising star in Silicon Valley with an impressive entrepreneurial background. He started selling iPhone apps at the age of 14 and later dropped out of USC to make it big in the Valley. He worked as a designer for much-hyped Pinterest as well as designing the iPhone app for Turntable.fm, then raised a seed round for Gumroad in just four days.

In a nutshell, Gumroad aims to make selling content online as simple as sharing a link.

The service is straightforward: users sign in through Facebook or Twitter, submit a link to any type of content (or upload it), set a price, and are then given a link that can be shared anywhere on the web. Would-be buyers are prompted to pay with a credit card. The service also features an analytics dashboard so sellers can track views and purchases. It generates revenue by collecting a 5% transaction fee plus 25 cents per each sale.

The amount raised is noteworthy considering that Gumroad is still just a three-person team. That number will quickly rise, however. Lavingia intends on funneling much of the investment into hiring, saying, “We’ll grow very aggressively over the next twelve months. We expect to hire one person a month, mostly developers. We’re a very product-focused company and we don’t want to make any compromises.” 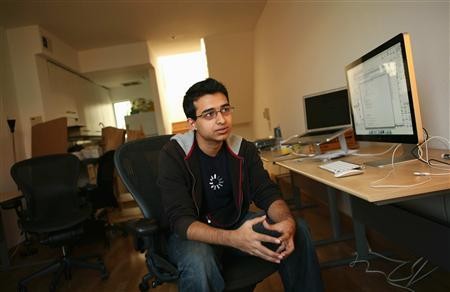 New board member Abbott should prove to be a key asset in driving Gumroad’s aggressive recruiting. He only recently joined Kleiner Perkins as a partner in 2011, prior to which he personally oversaw the redevelopment of Twitter’s infrastructure as Vice President of Engineering, growing the engineering team from 80 to more than 350 in less than eighteen months. Lavingia is keen on Abbott’s ability to scale a large consumer web product.

Lavingia was mum on specific growth metrics but insisted that the company has been relentlessly unveiling new features (around twenty in the past month alone, including an API).

Gumroad’s space is already active, with several other startups competing in the social micropayments category. Lavingia is quick to praise all his competitors, saying, “Anyone who’s helping people make money for the value they create is awesome.” But the list of players is formidable nonetheless.

Kout, which is in private beta, is essentially the same service. Flattr has been in the same space for much longer, but the company’s strategy is a bit different, instead revolving around a button that lets people make a charitable “micro-donation” for content. It’s not as simple as the link-sharing concept of Gumroad, Kout, and others. It also requires you to have a Flattr account to buy things.

Sellify, a Latvian startup, is also based on the same premise of using social media to share links to buy content. It even features the same 5% transaction fee. But the service relies on PayPal as a processor, requires content to be stored on its servers, and has slightly awkward buy-now buttons.

In either case, Lavingia believes strongly in social micropayments and the ability of new distribution mechanisms like Facebook and Twitter to drive commerce in ways that transcend the old “store model” of selling content.

He believes that the direct and connected nature of social media can effectively topple the distribution monopoly currently enjoyed by Walmart, Amazon.com, and the iTunes Store (among others), who often take a twenty or thirty percent cut of sales. That’s why he thinks, cliché or not, that Gumroad can be a billion dollar company.

Gumroad’s efforts are commendable, but one has to think about the massive challenge in supplanting existing online revenue streams, namely advertising. For most of the web’s history, that’s been the primary business model, which means that most consumer expectations are geared toward free access.

For big acts that have dared to directly distribute and sell online, like comedians Louis CK and Aziz Ansari, or rock band Radiohead, doing so is a sensible proposition. They’re fame and notoriety make people comfortable with paying for their work. But will most people pay for the average person’s content—be it a blog post, app icon, or song?

Despite how simple a service Gumroad is, there’s a psychosocial component that must be solved as well. Despite all the engineers the company will hire in the coming year, a few will likely be business development types, looking to strike partnerships with several big acts that are both free from label/industry provisions and comfortable selling directly to their audience.

Lavingia agrees, “It should work just as well for a Lady Gaga as your average Joe. We haven’t had that partnership yet, but we think we can scale up to that. It should apply as easily to people who have tens of followers to those with hundreds of millions.”

It thus becomes clear why scaling is so important, but to succeed, Gumroad must be in the business of creating a movement—not just a web service.