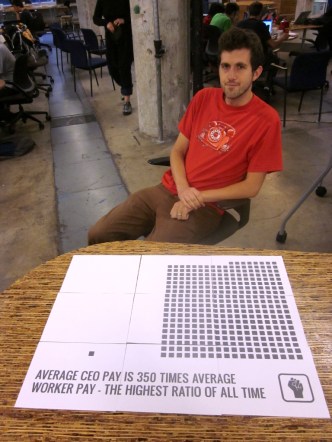 Occupy movements targeting corporate corruption have spread outside of the its Occupy Wall Street origins. Indeed, the day of Ewing’s hackathon over 4,000 people marched in San Francisco under the same Occupy flag. Many have accused the protesters of having no core vales, no unity, but the developers that gathered Friday night disagreed.

“We’re used to seeing manufactured politics — you have the RNC [Republican National Convention] saying, ‘Okay we’re going to have rallies with a clearly defined structure,'” said Ewing in an interview with VentureBeat. “That’s not really what movements look like. Movements are organic.”

For Ewing, technology is both the roadblock and the savior of protesters in today’s age. It engages people, helps people to connect, but is used off of the front-lines and can present a less than banded-together exterior.

“[Protesters] can move faster [because of technology], but they can easily look disjointed. This is what a 21st century movement is like,” he said.

Instead of disjointed, Ewing likes to call the movement “distributed,” which turned out to be true of the hackathon as well. After coordinating his event on social networks, Ewing found not only was San Francisco thinking along the hacking lines, but New York and Washington DC were holding their own hackathons. The three decided to band together for “Occupy the Web” with two goals in mind: To support local “occupations” and to expand the movement.

In San Francisco, hackers gathered at The Hub, a temporary workspace, after responding to an Eventbright invitation Ewing sent out on Tuesday. By Friday, the start of the event, 65 people had already signed up. 24-hours later, at 6pm on Saturday evening, six groups presented their hacks. The hackers chose their projects based on a poll presented to those involved in Occupy movements across the web. It addressed what was the protesters needed most from technology.

Here are a few of our favorites:

The developers behind Occupy the Hub were focused on support. “You need to see and you need to feel the support, even if you can’t be in these physical locations,” said Kyle Kesterson, co-founder of games company Giant Thinkwell Inc.

Today, support comes in more forms than just a chin chuck or a pat on the back. For occupiers, it can be a tweet, a Facebook like, or a video coming through Livestream. Kesterson and his team put the three together on one website, which will act as a “hub” for supportive content. The bottom of the site shows a number of avatars, which hold signs that populate with real-time tweets. Visitors can tweet directly from the page, with your local Occupy hashtag pre-populated, watch Livestream videos which appear in the middle of the page and soon the team will add a Facebook like button. The hope is as people like the page, an avatar for them will appear at the bottom of the screen and will hold signs for their tweets associated with Occupy.

Alex Levinson, a security engineer with a popular gaming startup, participated in some of the smaller protests outside of the big cities and realized what we often forget: not everyone has a smartphone or access to a laptop. Dumb phones need love too, and so he created OccupySMS, which allows you to join a group chat executed over text messaging.

“I envisioned it being important for people who don’t know each others’ phone numbers to get in communication easily,” said Levinson.

He used Twilio to allow users to remain anonymous and currently hosts it on his own server. Because Twilio costs one cent per text, OccupySMS will allow you to fund the effort through SMS, in the future. Levinson hopes in the future people will be able to create satellite group chats for specific locations and efforts. 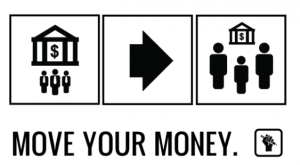 Photos of people holding up cardboard signs with various messages for the Occupy protests are concerning for many protesters.  For the media, it’s an opportunity to show what many people believe: these people are not organized.

“Our basic goal was to create a common visual language for the protest,” said Jake, who presented the idea.

To take on this challenge, the OccupyDesign team created a website for people to print out and tape together unified and graphical images represented the core mission of this protest. The idea is to not just say “Wall Street is screwing me,” but to show data conveying said screwing. Designers on the street can upload their own ideas as well, which may continue the trend of a disconnected message, but it’s also a channel for people to download signage with the same visual appeal.

Jake said it best, “This is the first protest that has had Adobe Illustrator and Flash..why aren’t we using these tools?”

Similarly to OccupyDesign, the OccupyAds team feels there is a unified message from within the Occupy movement, but admits the media has not yet grasped it. Indeed, many are wondering where the protests will go from here. Stirring propaganda is needed to empower and educate not only potential protestors, but the protestors already involved.

Following along the recent trend to “crowdsource” content, OccupyAds created a website where people can upload videos to be set as creative commons, or allowing anyone to use and edit that content. Then, those with video editing skills can use the built-in YouTube editor to splice 30 and 60 second advertisements of the movement. From there, viewers can pledge money to see the video as an actual advertisement. Once the pledges reach $1000, the ad is sent to GoogleTV and pushed out to various ad networks.