HackerRank is best known for its competitive programming challenges, which span multiple Computer Science domains and aim to evaluate developers based on skill. But the company also drums up interest by offering related tools and surveys. Most recently, HackerRank launched an AI-powered tool for assessing how companies hire developers in September and released its 2018 student developer report in December.

Today, HackerRank released the 2019 edition of its annual Developer Skills Report (PDF), surveying over 71,000 software developers from more than 100 countries. Every single industry requires software developers, meaning competition for technical talent is fierce. The idea here is to help everyone from CEOs and executives to hiring managers and recruiters understand the developers they’re pursuing.

We’ve put together a quick video to summarize the results:

For more details, read on. 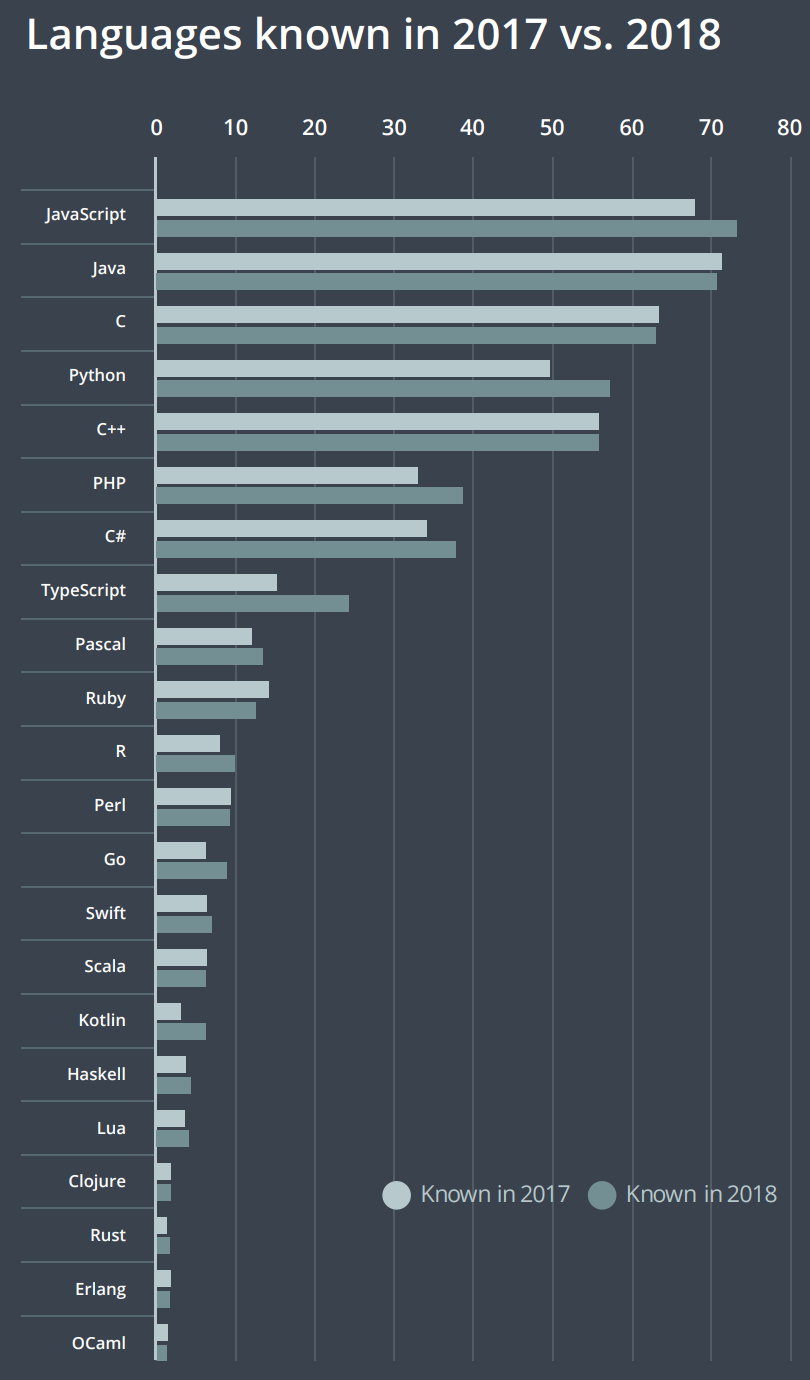 HackerRank asked developers which programming languages they knew and which ones they wanted to learn. Seventy-three percent of developers said they knew JavaScript in 2018, up from 66 percent in 2017. JavaScript was 2018’s most well-known language, compared to Java in 2017. 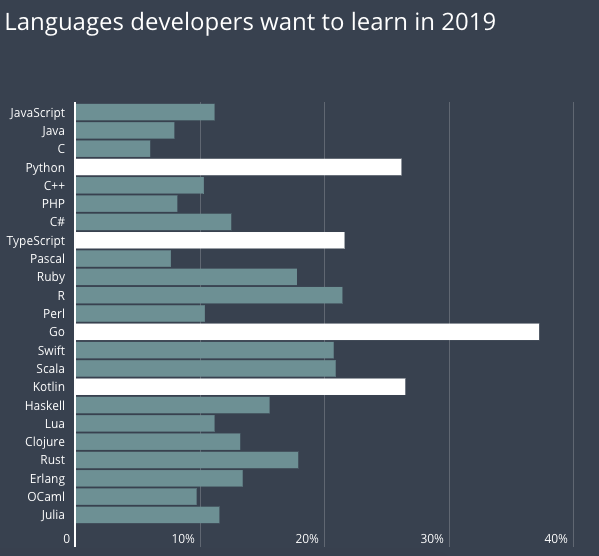 Last year, developers were eager to learn Go, Kotlin, and Python. That didn’t change for 2019. Interest in Scala dropped, however, while interest in TypeScript increased. 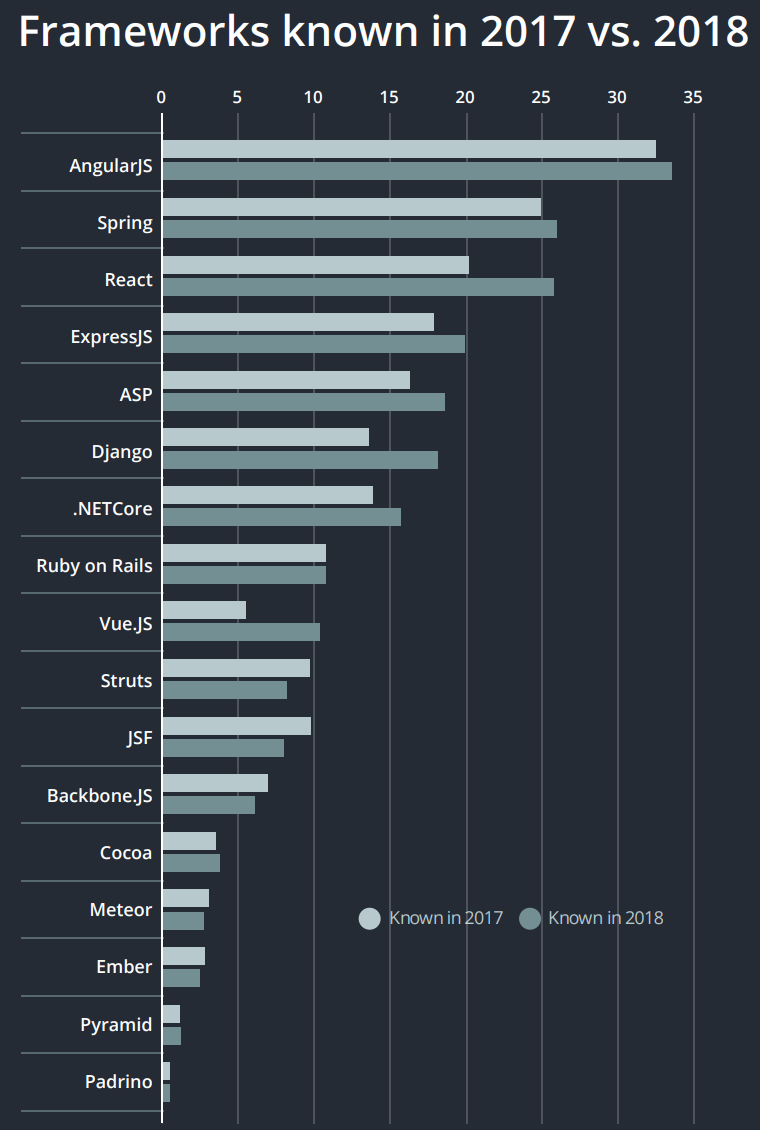 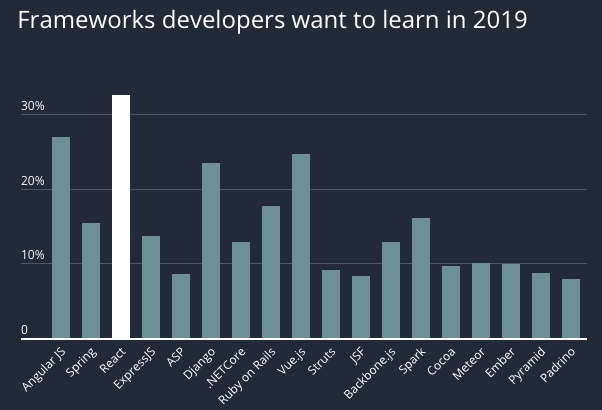 And that trend is likely to continue, as developers are most interested in learning React this year. 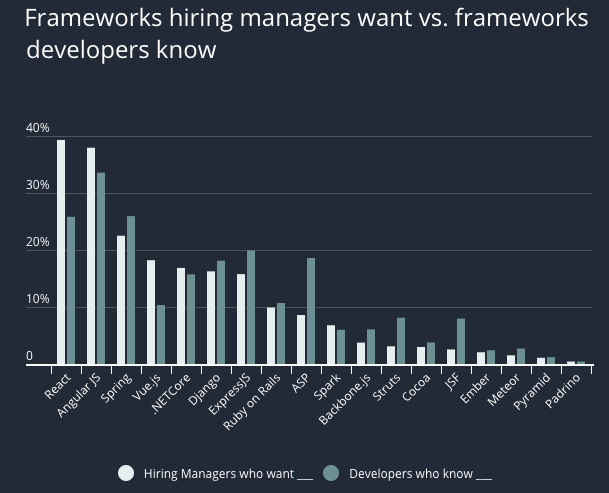 Furthermore, companies are most eager to hire React developers.

In terms of new technologies in real-world applications, 53 percent of developers believe internet of things (IoT) is most likely to be adopted over the next two years. Homes, cars, and entire cities are becoming more connected, so this shouldn’t be a huge surprise. 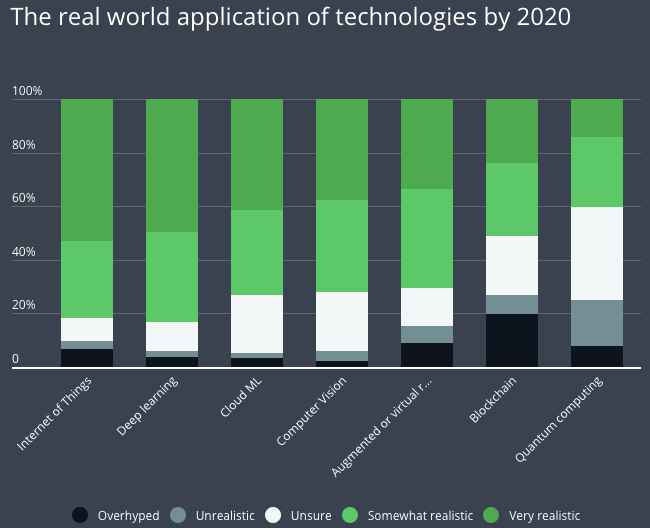 AI technologies weren’t too far behind. Fifty percent of developers gave deep learning a “very realistic” likelihood of being adopted by 2020, followed by Cloud ML at 41 percent and computer vision at 38 percent.

Thirty-four percent gave AR and VR two thumbs up, while 37 percent gave them just one. On the other end, blockchain got the most developers responding with “overhyped,” while quantum computing was seen as the least likely to be adopted by 2020. 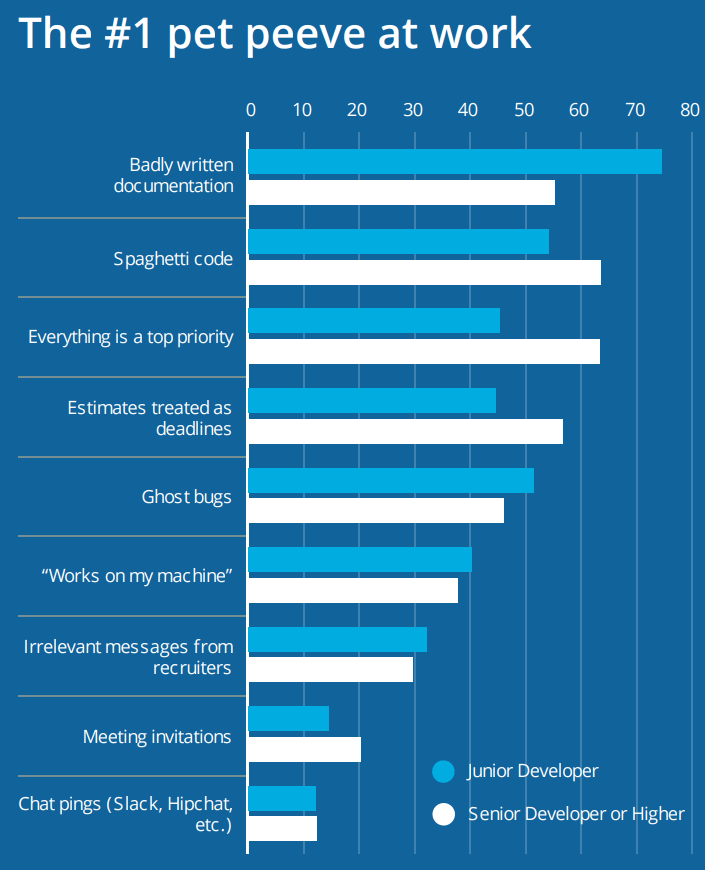 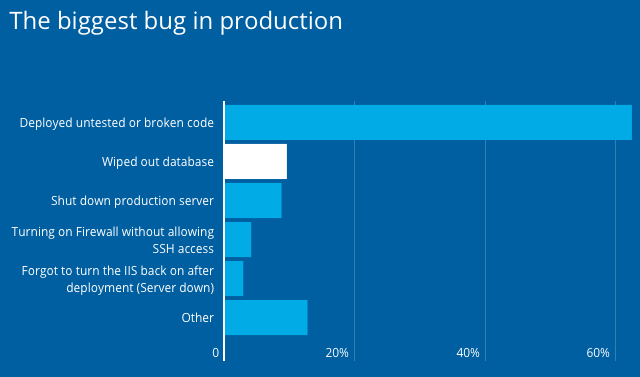 When asked about their biggest bug in production, 62 percent of developers said they had deployed untested or broken code. But almost 10 percent also admitted to having wiped out the entire database.

What developers want and don’t want 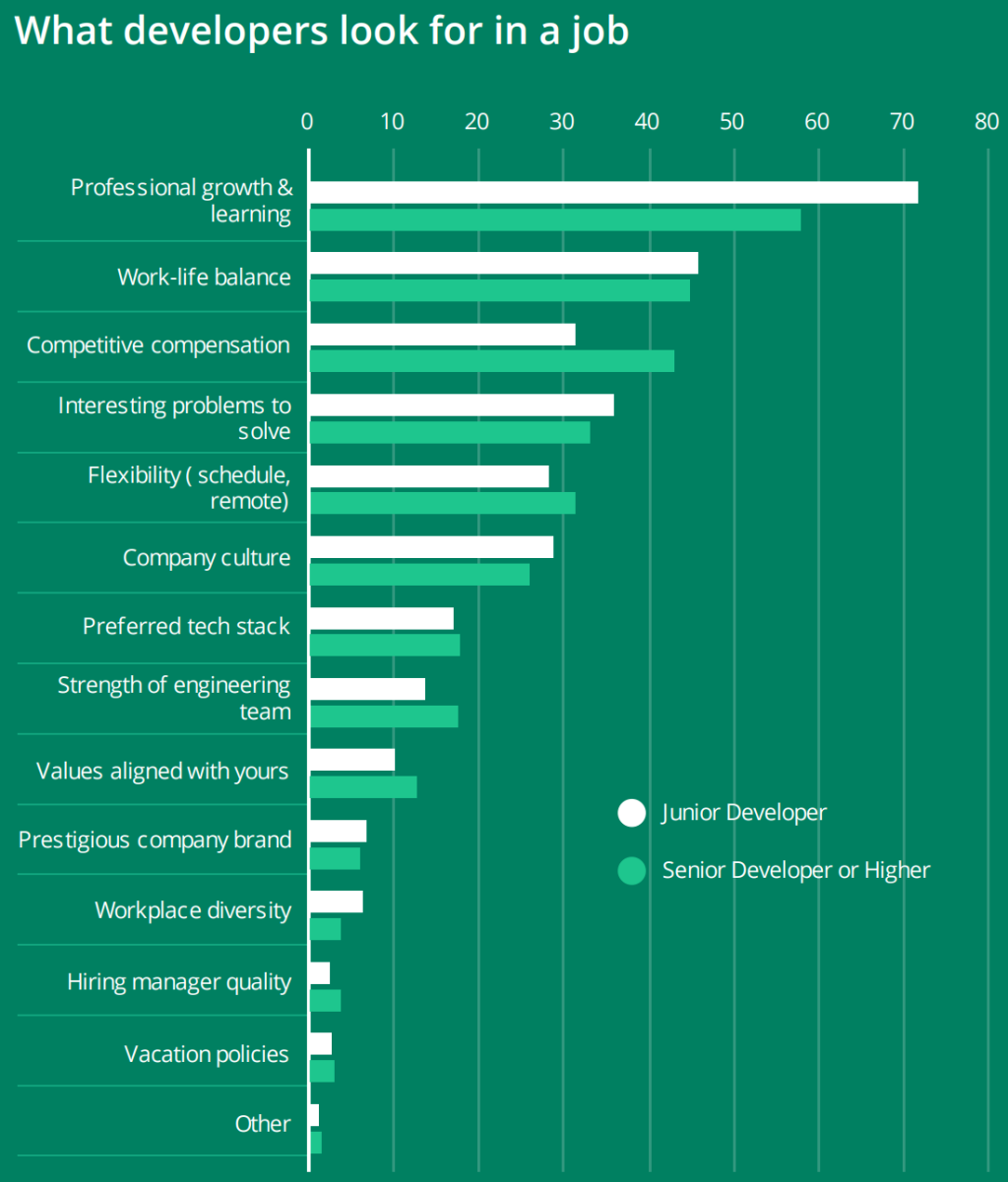 When looking for a job, all developers are most interested in the opportunity for professional growth and work-life balance. Competitive compensation and “interesting problems to solve” swapped spots with seniority, as you might expect. 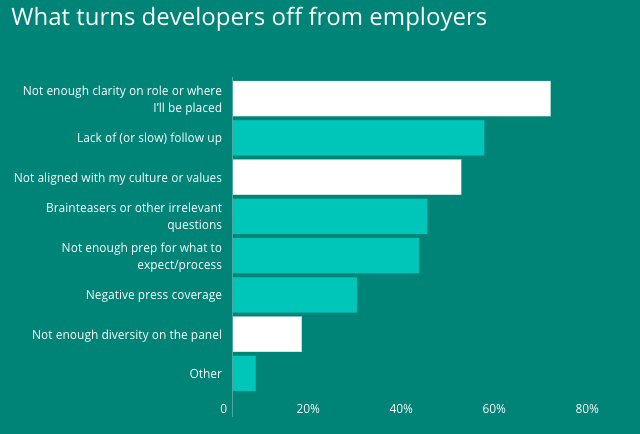 Sixty-eight percent of developers were most likely to be turned off by employers who don’t provide enough clarity around roles. We saved the best for last — this is the chart you should study if you’re trying to attract top developer talent.

“Hiring and retaining skilled developers is critical for businesses everywhere,” HackerRank CEO Vivek Ravisankar said in a statement. “Recruiters and hiring managers need a deep understanding of who developers are, what they care about, and what they want from their employers. For example, nearly half of developers view values misalignment as a deal breaker when considering a job opportunity. We want to match every developer to the right job, and this data gives engineering teams a blueprint to find and keep the best developers for their roles.”