A pair of new redesigns being rolled out this morning for the mass-market search engine Ask, as well as semantic search company Hakia, aim to notch up their challenge to Google’s statistic-based search results.

Oddly, the change Ask is making harkens back to its origins as Ask Jeeves, a comic butler that tried (and usually failed) to give sensible answers to search queries posed as questions. While, thankfully, it’s leaving Jeeves to rest in peace, Ask is returning to the question-and-answer model of the following sort: “How far is Reno, NV from Las Vegas, NV?”. It’s also changing its results page to be simpler. 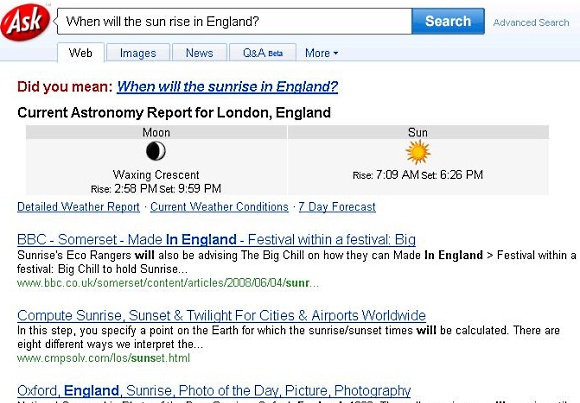 The move is odd because Ask Jeeves (the engine, not the butler) wasn’t particularly successful, at least in comparison to the top search engines. But with the growing success of semantic technology, a field that tries to make computers able to understand words and sentences, it’s now easier for Ask to return good results to questions. Customer retention and satisfaction rates are both up about 15 percent, according to this morning’s San Jose Mercury News.

Ask needs any extra juice it can get. The engine currently ranks last out of the top four search engines in the United States, with a bit over four percent of all users. For several months, it was gaining users — unlike MSN and Yahoo — but in the last survey we reported on, it had slipped somewhat, with only Google gaining any users.

Unlike Ask, Hakia hasn’t been around long and currently holds only a vanishingly small part of the search market. The company started off relying on its own proprietary semantic technology, but is shifting its strategy to rely more on human editorial and design elements.

A few months back, Hakia added “Credible Results” to medical searches, bringing sites to prominence that had been approved by medical professionals. It now also vets sites on environmental topics and has librarians working on pointing out worthwhile sites in other categories. As part of the design, it’s making those “credible” returns more prominent, although automatic semantic technology will still rank them. 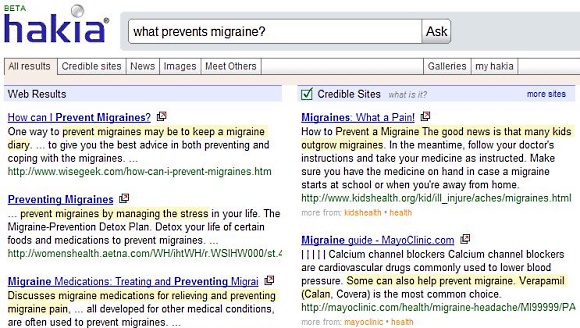 The engine is also moving its design in the opposite direction from the one Ask is taking, to a more information-rich view. Three columns will appear in response to most searches, giving immediate access to images and news as well as regular results. Google currently requires you to click over to its image or news search portals to get a full view of those results, although it often offers one or two of those results in a regular search.

Although Hakia is probably making more drastic design changes, Ask is also planning to mix in more results like news and images with regular searches, something that all the majors engines are toying with.