Semantic search engine Hakia has started to license its technology to other startups, starting with RiverGlass, a company that digs through and summarizes information on behalf of government agencies.

The four-year-old Hakia has accumulated some $21 million in funding to support its development, and has grown to about 50 employees. Like other companies working with semantic technology — Powerset and Radar Networks being two — it was branded initially by the media as a potential “Google Killer”.

Last year, Hakia launched Hakia Challenge, a side-by-side matchup of Hakia and Google. The results sometimes compared well to Google, but generally did pretty badly. At this point, the results are better. At the least, Hakia provides a usefully different perspective from Google’s results (there’s an example after the break). But Tim McGuinness, the company’s VP of search, says that the engine never intended to compete with Google. The side-by-side comparison was merely done because so many people requested it.

But the company always planned to build its technology for specific applications, rather than offer the full-web search Google does, he said. Hakia is turning to license its technology, because it can helpful for various tasks.

These tasks include information analysis, summarization of documents, machine translation and terminology standardization (in which similar words like “separation” and “divorce” would be changed to a common term, because in some instances users don’t necessarily want to differentiate between the two). The process is supported by Hakia’s internal reference table, which includes over 100,000 words. Any task automating the processing of data can benefit from having Hakia involved.

Hakia is actually closer to natural language processing, in which computers try to understand a sentence by its structure and meaning the way a human would, than it is to semantic search, which can be done in various ways but generally means finding interrelations between terms in bodies of text.

McGuinnes says he doesn’t think the company has any direct competitors who are trying to do the same thing. While that may be true, other companies like Powerset are also building out APIs for developers to plug into, and regardless of the methods used, the companies with the most accurate technology in any given situation will win out, as occurred with Google in web search.

Update: Hakia’s CEO has posted a response on the company blog to clarify that, well, they’re happy competing with Google too, if that’s an option. “hakia’s competitive position is undefined, and hakia’s promise is not built on competing for the same turf with others … Semantic technologies will bring out something new about the Web that is hard to place in any competitive scale,” he says. Read the rest here. 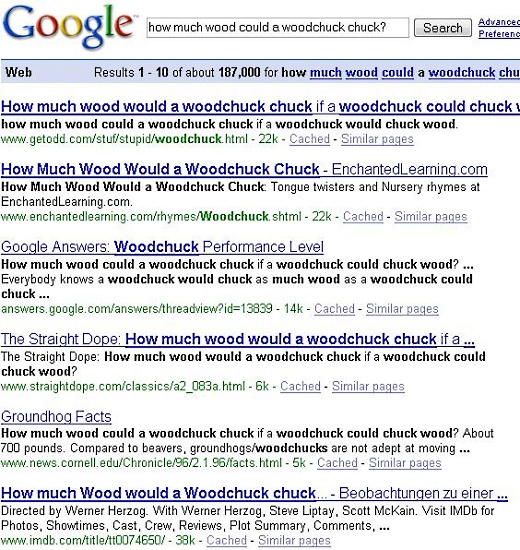