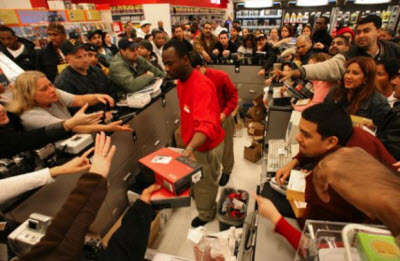 About half of all goods purchased over the Black Friday weekend were electronic gadgets, according to a survey by the Consumer Electronics Association and polling firm Caravan.

The survey estimate that 118 million Americans will shop Thursday through Monday and consumer electronics trailed only clothes as the most popular gifts purchased this weekend.

“Black Friday shopping has fast become a Thanksgiving weekend tradition, like football or a post-Turkey dinner nap, for millions of shoppers,” said Shawn Dubravac, chief economist and director. “The holiday shopping season got off to a strong start as many hit the stores or went online to kick-off their holiday shopping as soon as they finished Thanksgiving dessert. These bargain hunters were able to find the deals they were after.”

About 48 percent of all shoppers bought or will buy consumer electronics from Thursday through Monday, the survey found. More than 60 percent of shoppers were buying clothes in the same time frame. The CEA’s annual CE Holiday Purchase Patterns study showed separately that the average consumer will spend an all-time high of $246 on electronics gifts this year, up 6 percent from last year and amounting to a third of all gift spending.

Black Friday and Saturday were the most popular days to shop during the period, though 11 percent of shoppers got out on Thanksgiving Day. The most popular electronics purchases, in order of priority, are digital cameras, video game consoles, accessories such as cables and cases, TVs, notebook computers, smartphones, MP3 players, eBook readers, and tablet computers.

Mass merchants were the most popular place to ship, with roughly 77 percent of those who had already shopped saying they shopped at a mass merchant. Department stores, electronics stores, and online retailers were also popular. About 46 percent of shoppers purchased their consumer electronics online.

“Electronics continue to be the must-have gifts of the holiday as consumers are allocating more of their overall gift budget to buy the latest, innovative technologies,” said DuBravac. “Mature product categories, such as televisions, digital cameras and MP3 players, fared well this weekend as unprecedented price points proved too tempting for shoppers to ignore.”