This is an impressions piece on Halo: Master Chief Collection’s multiplayer. GamesBeat will run a later review of the multiplayer after release. –Ed.

I felt like a time traveler the other day. I sampled the multiplayer missions in Microsoft’s Halo: Master Chief Collection, starting with Halo 2 multiplayer, playing in a map that I hadn’t played in a decade. Then I played a Halo 3 map from circa 2007, and I finished up with a Halo 4 multiplayer map from 2013. Here’s my impressions from that short demo experience. The collection — which is part time capsule, part treasure chest — comes out Tuesday in the U.S. for the Xbox One.

It’s a fun and nostalgic experience. Fans that have bought more than 60 million copies of games from this series over the past 13 years will find it this collection alluring. It packs four games that star the main character in a single $60 box for the Xbox One. All told, this has more than 100 multiplayer and Spartan Ops maps from all four Halo main releases, with Halo: Combat Evolved maps playable for the first time on Xbox Live. You can curate your own “playlist” of your favorite maps, mixed and matched from the different titles. If you’re like me, you’ll find that your memory plays tricks on you, as I thought the graphics on the original Halo and Halo 2 games were pretty good. Now, they look atrocious next to modern high-definition games like Halo 4. 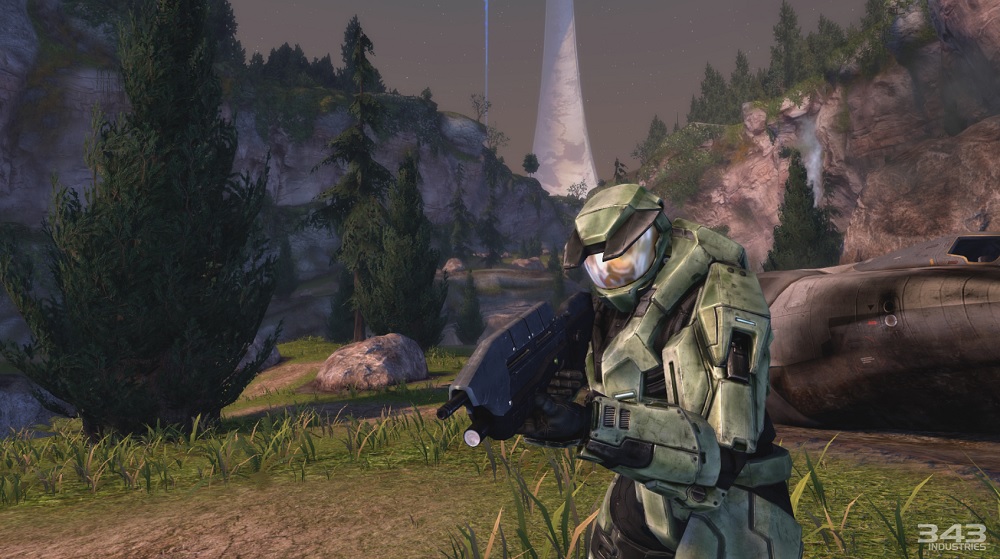 Above: Halo: Combat Evolved debuted in 2001

In the classic version, Halo 2 looked terrible. Microsoft has remastered it so that it looks great on high-definition TVs, and you can play that version if you wish. It was fast, running at 60 frames per second. The map we played had a couple of bases separated by grassy hills. It had no real cover. The vegetation was sparse. I hopped into a Warthog (dune buggy-like armored vehicle) and operated the Vulcan anti-aircraft gun in the back. That was the best decision I ever made, as my driver competently took me past a bunch of running and jumping Spartans. It was like a turkey shoot. I kept on hammering away with the Vulcan.

Our driver tipped over the Warthog a couple of times. But we hopped out and flipped it over, and we went on with our carnage. But then a pesky sniper took me out, and we lost the Warthog. After that, we had to get around on foot. And the four enemies we squared off against stormed our base and killed us as we spawned, without any big weapons. We eventually lost the round. But it brought back a lot of memories about the joys of fighting Master Chief against Master Chief. 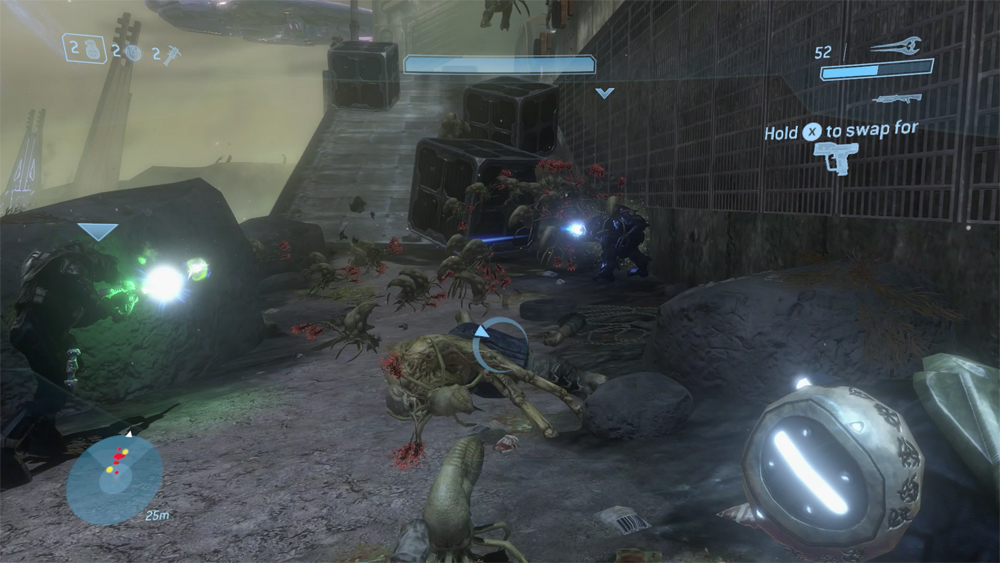 Above: Halo 3 still visually holds up in Halo: The Master Chief Collection.

Next, we tried Halo 3. It’s a pretty game by comparison, as it was authored for the HD era and ran on the Xbox 360. But it was so slow. The combat moved at a plodding 30 frames per second, which was the pace of the original game. It has great lighting and shadows, lots of detailed graphics, and cool water effects. The gameplay was slower, and that meant you had to be careful in your movements. If you took the time to toss a grenade, someone could come up and take you out with a melee attack. I found it impossible to survive or even get a kill.

When we played Halo 4, we got the best of both looks and performance. It had beautiful 3D graphics, but it moved at 60 frames per second as well. By the time I played this map, I was getting better at the multiplayer combat again. I was hitting enemies with assault gun volleys, knocking them out with melee attacks, and getting some scores with grenades. By the end of it, I was all tired out. I imagine that lots of players are going to enjoy moving in progression for the whole series in just one evening.

When you play these games, all separated by year, in back-to-back sessions, you can really appreciate the progress that video games have made over the past decade. You’ll also be able to play the multiplayer beta test for Halo 5: Guardians if you purchase the Halo: Master Chief Collection. Microsoft will make that beta test available on Dec. 29 for those who buy this.

Overall, Microsoft has preserved the gameplay details of the original titles. That keeps the experience authentic. And I think that plenty of fans, from neophytes to e-sports competitors, are going to welcome that.