Microsoft has announced Halo: Spartan Strike, a new Windows 8 smartphone, tablet, and Steam game that will often a brand-new adventure in the Halo universe. It is a follow-up to last year’s Halo: Spartan Assault mobile game, and thankfully Microsoft has nixed the microtransactions in the new top-down shooter title.

I got a hands-on preview of the game, which you can play on a touchscreen device such as a Microsoft Surface tablet. You won’t see this on iOS or Android devices anytime soon as Microsoft is using it to promote its own platforms. Microsoft’s sci-fi first-person shooter has sold more than 60 million units (or billions of dollars at retail) since 2001, and it has helped Microsoft sell millions of Xbox, Xbox 360, and Xbox One game consoles. By making the game exclusive to the Windows tablet and smartphone platforms (at least for now), it hopes to sell more tablets and smartphones as well.

Microsoft Studios is the publisher of Halo: Spartan Strike while Halo studio 343 Industries and Vanguard Games, which created Halo: Spartan Assault, are developing it. The game will run on Windows 8 phones, tablets, and on Steam devices. It will be available for $6 on Dec. 12 with a teen rating. 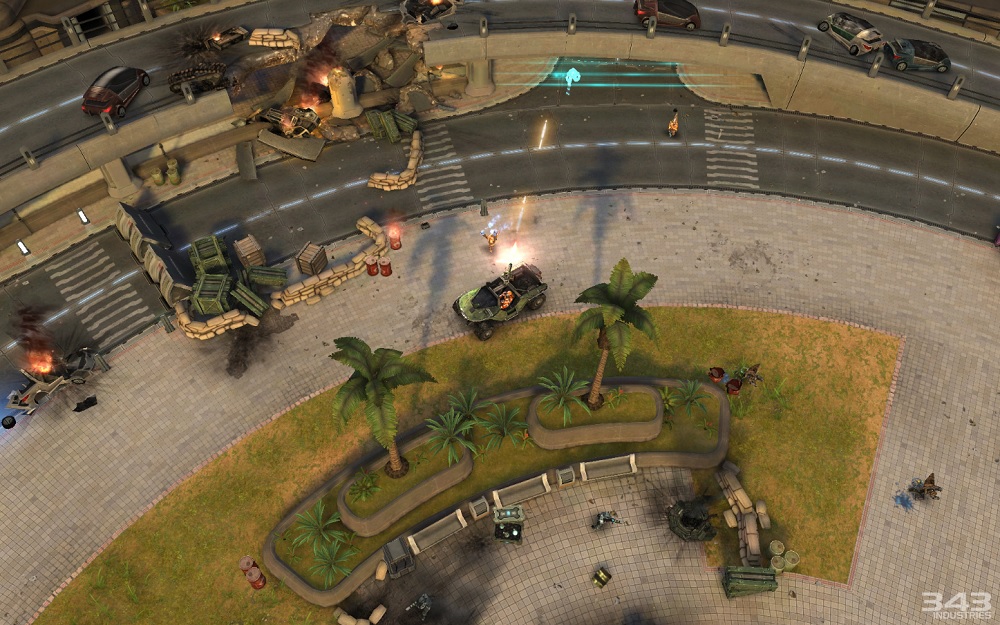 When you buy Spartan Strike in the Windows mobile store, you’ll get it both on Windows Phone smartphones and tablets as well as Windows PCs. Steam is its own separate platform.

Dan Ayoub, the executive producer at 343 Industries, told GamesBeat that the game has a connection to the upcoming Halo: The Master Chief Collection on the Xbox One game console. You can play the collection and get three achievements in Spartan Strike. And there are three achievements in Spartan Strike that will get you an emblem, a nameplate, and an avatar in Halo: The Master Chief Collection.

The twin-stick shooter game is set during the events of Halo 2. It is similar in gameplay and graphics to Halo: Spartan Assault, which debuted last year. But the developers have taken feedback into account and removed the microtransactions.

“That was a big pet peeve for people as they didn’t feel it was bringing anything new to the game,” said Fred Laporte, the producer of Halo: Spartan Strike at 343 Industries, in an interview with GamesBeat.

Any rewards you get are earned through Spartan Strike’s currency system. In the past, you used to be able to buy rocket launchers with real-money in-game transactions. It was perceived as a big negative, Laporte said.

The developers also launched improved controls, advanced abilities, and new enemies. The game has 30 missions through cities and jungles, with new weapons and vehicles (the Warthog). New enemies include the Prometheans. It has a score from award-winning composer Tom Salta, who created the original scores for numerous Tom Clancy games. 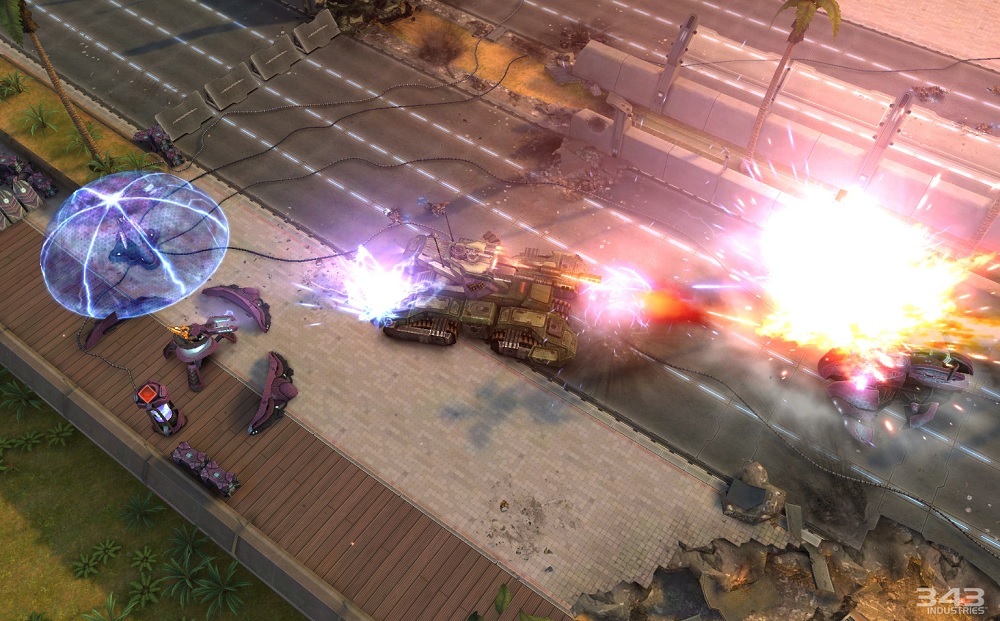 If you don’t like the touch screen, you can play it on a keyboard and mouse or an Xbox controller. I was not particularly skilled with the touch screen as you had to figure out exactly which way to point your finger in order to fire. And I accidentally hit the grenade button on the side of the screen a couple of times.

The game is set on three worlds: New Mombasa, Gamma Halo, and New Phoenix. The Prometheans join the Covenant as new enemies for the player.

There are “teleport” abilities that the Prometheans use to evade you. The game’s new weapons include the Suppressor, Scatter Shot, Binary Rifle, and Incineration Cannon. Armor abilities include the Proximity Mine, Bubble Shield, Teleport, Shock Chain, and Airstrike.

On the Spartan side, you get access to some cool new vehicles like the armored dune buggy Warthog and the hovertank-like Kestrel. I had fun jumping into the Warthog. Whenever your vehicle gets shot up, you can trade it in for another one at convenient spots after firefights. That helps preserve the fun of driving for longer periods of time. The worlds are bigger, and the environments have richer graphics. Some of the levels have more vertical play.

As far as controls go, Laporte said you can now more precisely launch a grenade at a particular spot by tapping on the grenade icon and then tapping on the target. The animations of the proximity mines are cool. You can lay them down, and they pop up when an enemy comes near. Then they chase the enemy for a distance and then explode.

You get instructions from Lt. Quan, who tells you the details of your mission, much like the artificial intelligence Cortana does in the Master Chief games.

The title should satisfy the mobile urges of Halo players. In the meantime, Microsoft is also launching Halo: The Master Chief Collection on the Xbox One game console. It is also working on video expansions of the Halo universe with Halo: Nightfall and an upcoming Steven Spielberg television show. 343 Industries is also working on Halo 5: Guardians.

Laporte said that the new game will be four or five hours of gameplay, compared to three to four hours for Spartan Assault. If you’re a Halo fan and you’re waiting for Halo 5, this game is a nice diversion. 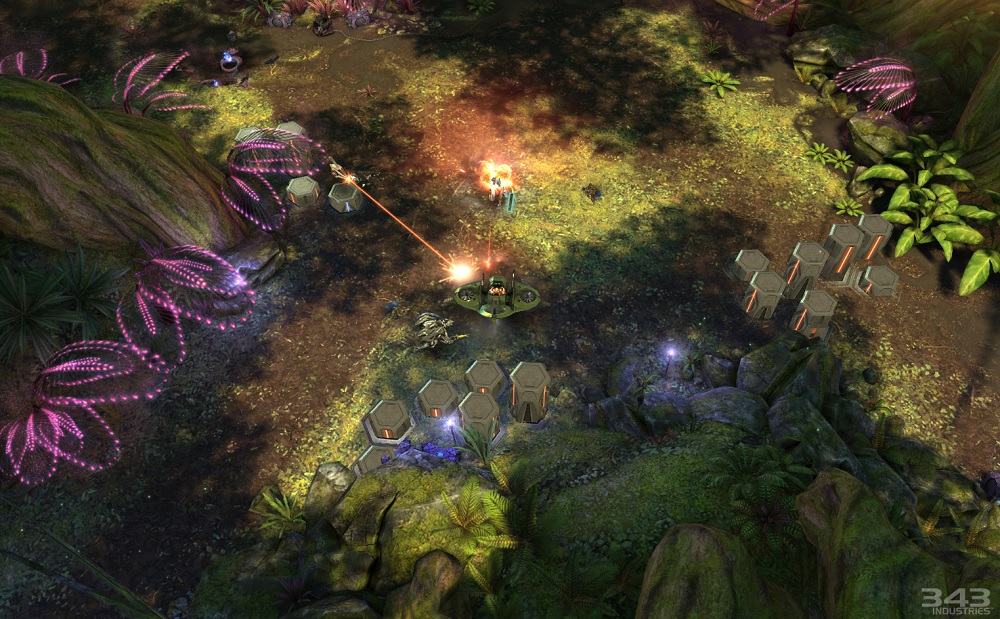