They’re weeding out billions of proteins from hundreds of thousands of plants to figure out what could form the basis of a vegan equivalent of an egg. First, they propose a given protein for testing. Then, glorified chefs try it out with a few other ingredients. Results get sent upstairs to the data scientists, who block out the protein involved with poor results and others related to it. And Hampton Creek thereby inches closer to its noble goal.

The startup has succeeded in landing its plant-based “mayo” and cookie dough in Walmart and Whole Foods stores all over the U.S., and it’s considered international expansion. Thus, Hampton Creek has caught attention alongside other startups with products that people can buy and eat, like Beyond Meat and Soylent.

But that ignores Hampton Creek’s potential. It could weave its products into huge food-product operations, which could lower their carbon emissions — and their sourcing costs to boot.

That’s where the computers come in.

“Our slug is, we apply deep machine learning to plant biological data,” Lee Chae, Hampton Creek’s head of research and development, explained to VentureBeat in an interview at the startup’s office. Indeed, Chae said, Hampton Creek has explored the use of deep learning, a type of artificial intelligence, to meet its objective of creating healthier food.

The recipe calls for servers

Chae believes that, with its data scientists, food scientists, biochemists, chefs, and on-premises servers, the startup can perform an extraordinary amount of research, especially given its size.

“We’ve talked to major food companies out there that have multi-, multimillion-dollar research budgets,” Chae said. Oftentimes, he said, the work revolves around product development, which can bring in revenue.

“There’s less to the ‘R’ side, the research side,” of R&D, or research and development, Chae said.

Hampton Creek, for its part, has the feel of a genuine lab, where rows of workbenches with sophisticated machinery and ingredient containers take up much of the office space.

Everything happens in accord with an elaborate process that involves humans and machines alike:

The predictive models in particular represent a sort of strategic secret sauce for Hampton Creek.

“That way, we learn what properties are really meaningful for performance, and we can reduce that search space by just focusing on those properties and increase our hit rate,” Chae said. “Then we can search that space intelligently and efficiently — unlike any other company out there that has not developed this technology.”

But making emulsions with proteins and putting each of them in a pan — which employees may do several times per day — will remain an essential step. After all, people will be preparing food with these proteins, not just staring at numbers about them in a spreadsheet.

And that’s why there are real chefs, like Ben Roche and Chris Jones, who bear the titles research and development chef and director of culinary innovation, respectively. Their work is manual, but it does get turned into data. 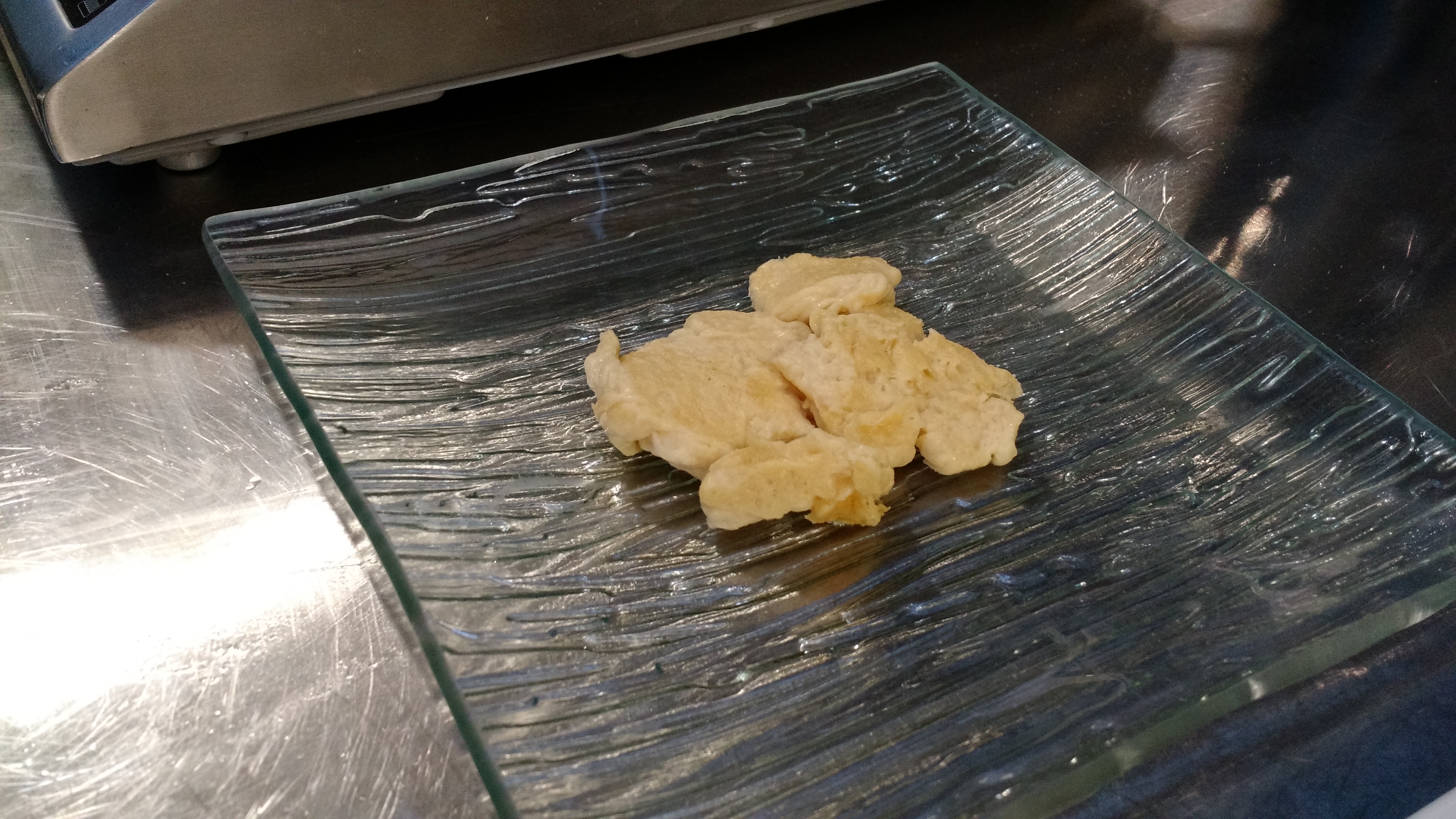 Jones, who spent several years as chef de cuisine at the Moto Restaurant in Chicago before moving to San Francisco to work for Hampton Creek, prefers good old notebooks to store his observations about proteins. Jones also writes out brief strings of letters and numbers about specific proteins in marker on a whiteboard, which the company had thrown a dark cover over when I stopped by. The real-world figures eventually get transferred into databases.

Jones knows full well that his impressions of proteins are not very precise. It would be more accurate to describe them as subjective, or maybe informed, following years of experience tasting foods. But Jones knows his routine. He doubts his taste buds will get thrown off very much. And so his very human mouth remains a crucial component of an otherwise very high-tech startup.

Judging by one indicator, the balance between servers and chefs might be just right.

“There’s a reason why all these food companies are dropping us inquiries about partnering to use our technology,” Chae said.