Nothing beats the fun and good times hanging out at an arcade. And that’s what virtual reality arcades like Sandbox VR are trying to bring back. I tried out the company’s latest VR experience in San Francisco, the Star Trek: Discovery — Away Mission. And we all had a really good time pretending to be Federation officers on an away mission on a mysterious planet.

As you can see in the videos embedded in this post, we were laughing away and got lost in the immersive experience of VR. And while five of us were stationed in a fairly small room, none of us came out with bruises from bumping into each other.

For the demo experience, I gathered some friends of GamesBeat: Jon Gagnon, Josh Allen, Rob Oshima, and James Zhang. We went into the futuristic-looking Sandbox VR location on Market Street. We booked our appointment ahead of time, and it lasted about an hour, if you count the suiting up and debriefing times. It costs $48 a person, which isn’t bad when you think of this as a team-building mission.

The experience is one of five that we could have chosen from. Sandbox VR teamed up with CBS Interactive to create the Star Trek: Discovery experience, as the iconic Holodeck from Star Trek was the original inspiration for Sandbox VR’s simulations. They created an original story where as many as six people can participate as U.S.S. Discovery crewmates. 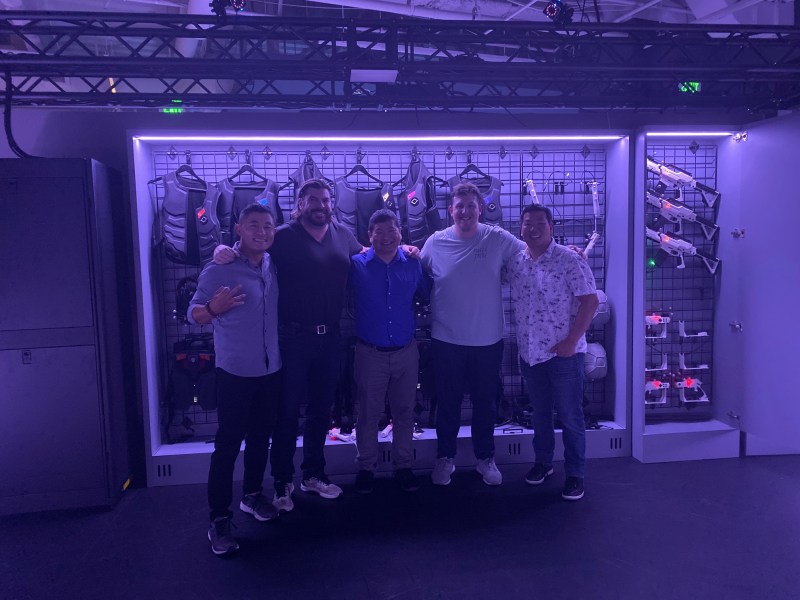 We took an escalator to the basement, which was bathed in a purple light. Our guide brought out a box full of colorful sensors. We strapped these onto our wrists and our shoes. Then we went over to the suits, which consisted of VR headsets and a backpack with a powerful laptop computer in it. We strapped on the backpacks and then put on the headsets, which had been wiped clean from previous use. Since we weren’t wired to a desktop, we could all move around freely.

We had to get used to being in VR in a confined space. And we got our props. In my left hand, I held a tricorder, which I could scan on the virtual environment to get data. And in my right hand, I had a phaser for combat. We were trained out to use both of them, and then we were shown how not to bump into each other and how to revive a downed teammate. 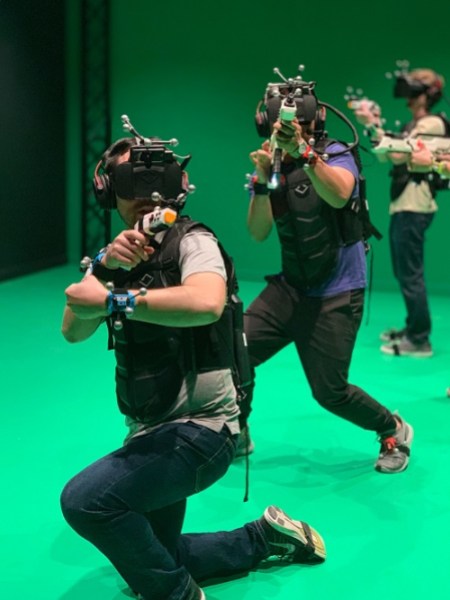 Then the VR experience began. We were briefed on what was happening by an actress from the show, Mary Wiseman, who was reprising her role as character Sylvia Tilly. We were in the transporter room. It seems a Federation ship was missing near the borders of Klingon space. It sent a distress call, but then went silent. We went to their location and beamed aboard their ship. But no one was there. Then we beamed to the surface of a planet, where we found the wreckage of a shuttle. As we dematerialized and rematerialized, we all cheered, “Whooo,” much to the amusement of our spectator guide.

We used our tricorders to figure out what happened, and we found evidence of dead crew members amid the wreckage. We were in the middle of an ice planet.

All of a sudden, we came under attack. A bunch of creatures with tentacles broke through the ice and attacked us. We all began shouting and firing at the same time. When one crew member was downed, we had to grab the person by the shoulder to heal them. It was pretty frenetic shooting. It took me a while to figure out that the phaser trigger had to be pulled over and over again to shoot rapid-fire. I thought I was shooting continuously with a laser beam, as an indicator always pointed at my target. This, of course, had dire consequences for my total score.

Finally, a massive creature came toward us, and we had to fire at it simultaneously to bring it down. I was hot and sweaty at the end of that fight.

Next, we found that our friendly ship had been ambushed by the Klingons, and they were doing the same to us. So they sent a massive wave of Klingon soldiers, attacking us in the shuttle bay of our ship.

We split up into two groups. One squad of three defended one side of the bay, and two of us were on the other side. We had virtual barriers that we could duck behind as the enemy fired at us. We had to point out that the enemy’s were shifting their tactics, such as shooting at us from the windows above the bay. And I didn’t realize for a long time that three enemies had actually come in behind my squad. After that, we had to look at our other squad to make sure no one was doing the same to them.

It was a pretty intense firefight, and we had to revive each other. And finally the Klingon boss came at us in a kind of helicopter-like space ship. He was moving around and firing heavy ordinance at us, and we all had to fire back and take him down. It was an intense battle, but I was laughing a lot. 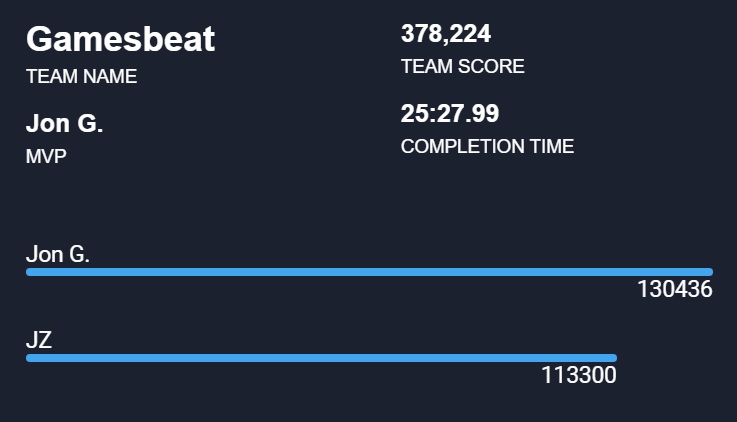 Above: Jon Gagnon had the most kills in our group at Sandbox VR.

At the close of the experience, we were sweaty. We took off the gear and went to another room. While they processed our video, our guide talked to us about how excited we were. I had to explain why my kill score was so low, and we all laughed about that. After that, we all walked out. James Zhang said he was planning to bring his whole company back for a repeat experience. I figure such company events are probably one of the biggest customer bases for Sandbox VR.

Is it the Holodeck? 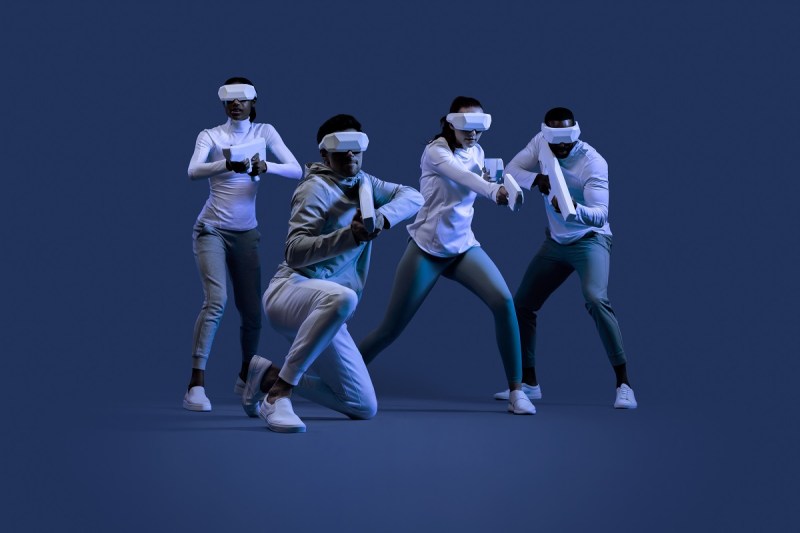 Above: Sandbox VR is building lots of VR retail locations.

Well, it’s nice that Sandbox VR has this ambition to reproduce the Holodeck. But while we were immersed in the experience and we had a lot of fun, we were under no illusion that everything around us was real. It looked better than most VR experiences that I’ve seen, but we could all tell that we were in a computer-animated universe.

I have to say that the added sensors on our hands and feet seemed to really keep the tracking on target. The cameras sensed our motion accurately, and the game did a good job of accurately showing where we were pointing our guns and shooting. I came in last place in our group, so I have no excuse for my poor accuracy at 19% and my low 29 kills, compared to nearly double that for our leader, Jon Gagnon.

For those who are really competitive, the leaderboard encourages people to come back and try again. But I enjoyed it once, and don’t expect to go back for the same experience. I might, however, be happy to try out the other experiences that Sandbox VR has at the location.

Sandbox VR has locations in Hong Kong, San Francisco, and Los Angeles. Michael Hampden, lead designer on Assassin’s Creed: Rogue, designed the Star Trek mission. The company is expanding to New York, Austin, San Diego, and Chicago soon. And it hopes to open 16 more locations by the end of 2020.

Sandbox VR recently raised $11 million from Andreessen Horowitz, Craft Ventures, and a long list of celebrity investors such as Katy Perry, Kevin Durant, and Will Smith. The new investment brings their reported total to $83 million in 2019, including a $68 million round from earlier this year. The company has about 100 employees.

That all amounts to a very big bet that this is the future of VR. I don’t know if the crowds are going to flock to this experience, as it’s a hefty price per person. But $48 per session certainly beats the cost of buying your own games, your own VR headset, and your own powerful personal computer. As VR continues to find its way, I think experiences like Sandbox VR have the best chance of delivering the Holodeck.