There comes a point when I have to stop for a moment to appreciate how far technology has come. The new Aspire One Cloudbook 11 from Acer is modest in many regards — limited storage space, diminutive monitor — but it’s also a capable machine for an affordable price. The 32GB unit I’m using retails for $190 (with a 16GB version at a $20 discount), and it’s a wonder that such a versatile machine is available for such a small price.

Granted, I’m not unleashing the taxing programs I would put a more powerful laptop or even my desktop. Instead, I’ve been primarily using Chrome to surf the Internet, which is the main thing I use a computer for anyway. And Aspire is fine for that. The trackpad works well for minute positioning, and it allows for two-finger scrolling, so I was able to navigate without searching for a mouse to plug into one of the two USB ports. 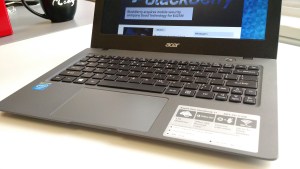 Above: Acer Aspire One Cloudbook 11.

However, it didn’t take long for a few hiccups to surface. Aspire has an Intel Celeron N3050 Dual-Core processor, which, if you don’t speak technical jargon, means it’s going to be taxed even without a lot going on. You know how animated GIFs populate every corner of the Internet? It didn’t take many for the machine to slow to a crawl. I quickly recognized the risk and chose to avoid it rather than face the wrath of a stuttering webpage.

As you might expect, this problem increases exponentially if you’re keen on keeping a dozen or so tabs open. Once I found the laptop’s limitations, though, I adjusted my browsing habits accordingly to push on with nary a hitch.

Aside from browsing, my other main use for a computer is writing. That makes sense given that’s what I do for a living, right? Aspire handles Google Docs swimmingly (that’s where I wrote most of the this story), and if you demand a more versatile word processor, Acer has you covered. Every Cloudbook comes with a free year of Office 365. Granted, you have to shell out money after a year, but at least you have 12 months to enjoy Microsoft’s office tools.

Office 365 isn’t the only year-long test drive Aspire offers. If 16GB and 32GB seem paltry space, sign up for 1TB of data through OneDrive. Again, it’s a sneaky offer considering that, if you fall in love with all those bytes of storage space, you’re going to be whipping out your credit card for the privilege of continuing to use it going forward. But at least you can try it for a year to see if it’s worth the cost.

Unlike its closest competitor, Google Chromebook, Aspire runs on Windows 10. This is an advantage for me because I already use Microsoft’s latest operating system on my desktop. I’ve put it through its paces here, and it runs just as smoothly as it does elsewhere. 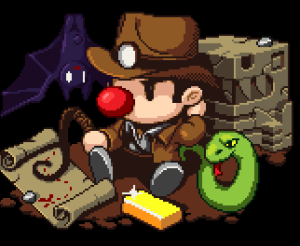 Above: Art from Mossmouth’s Spelunky.

Cortana, Microsoft’s answer to Apple Siri and Google Voice, is included with the OS, and I played around with her (its?) voice-recognition capability. I have to admit, after using Siri on my iPhone 6 for the last eight months, I was shocked at how well Cortana works. Here, even though I was using the built-in microphone next to an open window above a busy San Francisco street corner (complete with honking horns and yelling traffic cops), it picked up nearly every word I said. It even helped me change its search engine from Bing to Google, and I have to applaud Cortana for taking the high ground on a touchy subject.

Sadly, I can’t imagine using Cortana’s voice tool for anything other than novelty purposes. Unlike on a phone, where I’m cursed with a virtual keyboard, I have the real thing on the Aspire, and I’d much rather type in a query than let my officemates hear the myriad things that I don’t know.

I did do one final thing with my Aspire before setting to work on this post. I know that it won’t be able to run a graphically intense video game such as Metal Gear Solid V: The Phantom Pain, but something a little more modest seemed appropriate. So I downloaded the Steam digital PC game store and Spelunky to see if it was possible to play my favorite game on a sub-$200 machine. Surprisingly, at least to me, it ran without a hitch. That could be good or bad depending how much you want to be distracted from doing work. I’ll let you know my thoughts as soon as I finish another playthrough.

After spending a few hours with Acer’s answer to the Google Chromebook, I’m impressed by how versatile this machine is at such a low price. As long as you understand where Aspire excels (internet browsing, office tools, retro-style games), there’s a lot to like about this machine.

Now if only I could convince Cortana to publish this with one well-worded request. Maybe on next year’s version.