Today Samsung showed off its new Gear S2 smartwatch at the IFA Conference in Berlin.

A formidable competitor to the Apple Watch, the S2 features a sleek round watch face display, in contrast to the original Samsung Gear Watch, which was rectangular. But its best feature has nothing to do with aesthetics. The S2 can connect to a 3G network, so it can operate independently of a mobile phone. It’s also capable of making voice calls and will be equipped with Samsung Pay.

Buyers can choose between a standard sporty version of the S2 and a classic one that comes with a leather band and can be paired with traditional watch bands. The original S2 watch band can only be swapped out with other Samsung watch bands because of a custom quick-release mechanism. 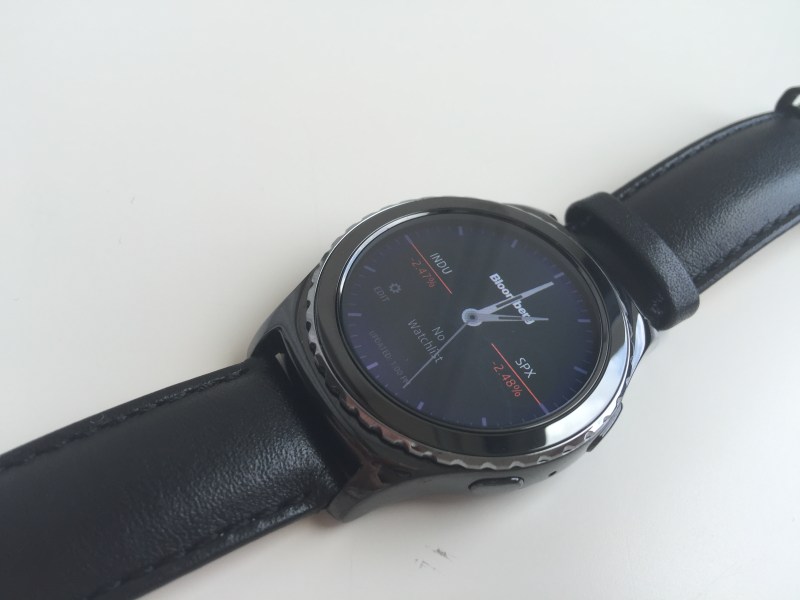 The watch is 11.4 millimeters thick with a 1.2 inch display, and though it’s not hefty, it is big. Well, for me anyway. 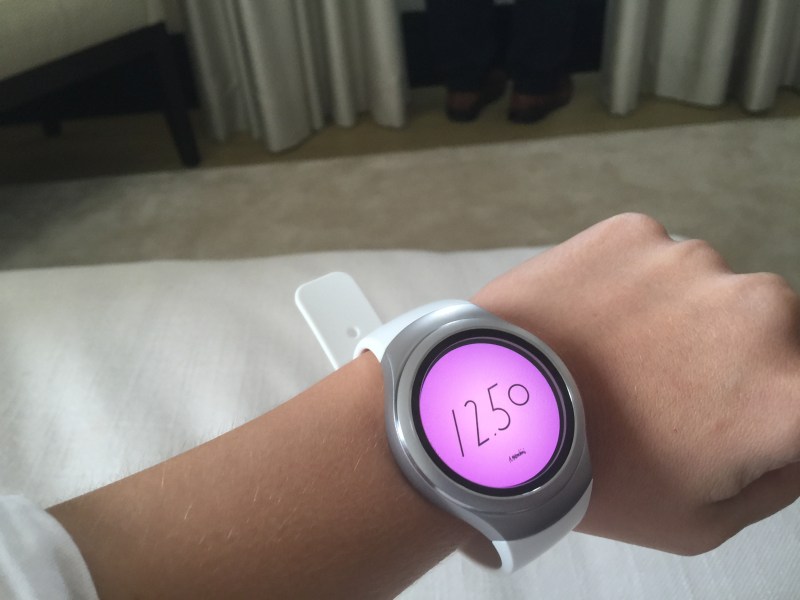 Don’t get me wrong. I think I could make the classic work with the right band, but this watch is a lot for those of us with petite wrists.

The S2 runs on Tizen, an open-source operating system that Samsung is helping develop as an alternative to Android, and the display has 360 x 360 pixel resolution. To navigate the watch, you have to turn the rotating bezel around the watch face. The bezel moves easily, but still has resistance. You can also swipe across the face of the watch to change screens, if that’s your preference.

Moving the bezel the left will reveal notifications; rotating it to the right gives users access to widgets and apps. A button on the right side of the watch will direct users back to the last screen they viewed.

In total, the S2 has 26 different watch faces to choose from, some of which have a news or social media ticker. The company also boasted that the watch will have 1,000 apps to choose from when it launches next month. Samsung said it worked directly with some app makers to help them craft the user experience.

With its accelerometer, heart rate detector, gyroscope, barometer, and ambient light reader, the S2 offers a hospitable environment for health apps. No doubt, upon launch we’ll see a number of apps that take advantage of those sensors.

I didn’t get to check out the voice calling feature, but Samsung said it has two microphones embedded in the watch so that it doesn’t pick up background noise. Having multiple microphones is important because voice commands are key to using this device.

For messaging, the watch has a T-9 keyboard, a throwback to mobile phones before they got smart. To avoid flashbacks on ever using a keyboard this tiny, you’ll want to instead use Samsung’s voice recognition software to dictate your messages. I found that I didn’t need to hold the watch directly up to my face in order for the S2 to accurately replicate my speech in text, which to me indicates Samsung has good voice recognition software.

In contrast to the Apple Watch’s sleek tapping mechanism, the S2 watch will discreetly buzz when it needs to notify its wearer of an incoming message.

The S2 will be compatible with any Android device running 4.4 and above. That means S2 owners are not limited to Samsung phones, though Samsung representatives warned there may be some differences in functionality if you pair the S2 with a phone from another provider (for instance, Samsung Pay may not work on S2 watches paired with a Lenovo or LG phone, because it requires access to the phone’s secure element).

Overall, though, the S2 is a compelling effort as far as smartwatches go. The watch only needs to be charged once every 2 to 3 days, and the functionality is pretty simple. I especially like the rotating bezel control. While the watch has some cool features, what really nails it for me is its ability to connect to 3G network. I don’t want to have to have my phone on me to use my smartwatch. Also, voice calling from a smartwatch may seem silly now, but there are contexts in which it would be helpful — like when you’re at home and you have no idea where your phone is and someone is calling you. Besides, if talking on your watch is just too strange, you can always connect your watch to wireless headphones.

Unfortunately, there’s no word on when the S2 will hit stores or how much it will cost. In the meantime, stay tuned for our full review.