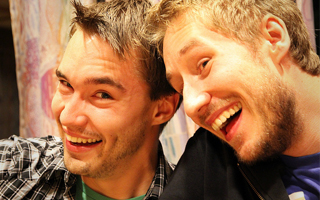 The seal of the high school I attended contained two Latin mottos: Non Sibi and Finis Origine Pendet. Despite seeing those words everywhere, I paid little attention to them. I later learned they mean “Not for one’s self” and “The end is determined by the beginning”, respectively.

Years of studying neuroscience and psychology has led me to believe those are truly insightful mottos that should be instilled not just in high school students but company employees as well.

In 1998 I was sitting in my partner’s home office, brainstorming names for our brand new educational video game company. It was one of the happiest moments of my life, perhaps reflected in the fun name we came up with: Mudpuppy Studios.

That happiness later deteriorated into pessimism and politics that undermined our company’s productivity and strategy. Three years later I was sitting with my partners telling half of our employees “I’m so sorry everyone, but we have to lay you off. We just don’t have the business to keep you on payroll.” Within months we were shutting down the company entirely, one of the lowest moments of my life.

If I knew then what I know now about optimal brain function, I might have been able to sustain the happiness and productivity we had at the beginning.

According to S. G. Post’s 2005 paper Altruism, Happiness, and Health: It’s Good to Be Good (published in the International Journal of Behavioral Medicine) scientific data suggests doing things for others boosts happiness and health.

Various studies have shown that happiness increases productivity. A 2009 study by A. J. Oswald, E. Proto, and D. Sgori for example found a 12% boost in productivity due to increased happiness. Those who work “not for one’s self” in your office will be significantly more productive than those who are more self-focused.

If my partners and I had instilled Non Sibi in our company culture, we would have been a more productive company.

Similarly, Finis Origine Pendet, or “the end is determined by the beginning,” has wisdom to offer startups. How a meeting, day, or company starts will largely determine the end.

Starting a meeting positively, with recognitions and other expressions of gratitude, puts brains in a positive state. (See the 2003 study by P.C. Watkins, K. Woodward, T. Stone, and R. L. Kolts for more on how gratitude boosts happiness.)

Negativity and fear, on the other hand, are the enemies of optimal brain function. When negativity and fear are intense, your brain goes into “fight or flight” mode. You decide between fight, flight, or freeze.

You hear less about this third option because it doesn’t rhyme, but in fact this is the brain’s first option when faced with immediate threat. If you see a tiger, if you shut up and hold still, maybe the tiger won’t see or hear you, and you’ll survive. If it becomes clear that won’t work — the tiger sees you and is approaching — then you choose between fighting it off (good luck) or running away (maybe you’re with someone slower than you are).

What you won’t do under fear is think creatively. In fact, you won’t use much of your brain’s prefrontal cortex at all.

Your prefrontal cortex is the layer of your brain immediately under your forehead; it’s one part of your brain that distinguishes you from all other mammals.

Our limbic systems, on the other hand, are quite similar to those of all other mammals. Our limbic systems are so good at keeping us alive under immediate threat, that they take over when we are excessively stressed or afraid.

It’s as if your limbic system (amygdala and other parts of your mid-brain) says to the rest of the brain, “We’re under threat here, and I’m in charge. I know we have only three good options for staying alive, so I’m going to decide between fight, flight, or freeze. I’ll take most of the oxygen and glucose coming to the brain now.”

Innovative, insightful thinking (“Hey, that tiger’s stripes would be a cool design for our new product logo”) doesn’t keep you alive, so the creative parts of your brain are relegated to the brain’s background.

Will your company have a positive, bright future? Or will fear and negativity undermine your success to the point of failure? How you start will have a significant effect on the outcome.

Science suggests that my high school had some very good advice: work not for yourself to boost your happiness, and remember the ending is determined by the beginning. Non Sibi. Finis Origine Pendet.

Scott Crabtree helps organizations attract, engage, develop, and retain top talent by applying neuroscience and psychology with workshops, coaching and consulting. Contact him through www.HappyBrainScience.com, or follow him on Twitter: @ScottCrab.