Energy management startup Hara released today its biggest software product to date, a supply-chain module that can evaluate energy efficiency among a client’s suppliers – vendors, transportation services, warehouses and the like.

The addition of Hara Value Chain effectively widens the scope of Hara’s main product, a software called Environmental and Energy Management (EEM)  that identifies energy inefficiencies within companies. EEM – which counts among its customers the city of Las Vegas and Safeway — can make recommendations about potential energy savings and track carbon emissions. 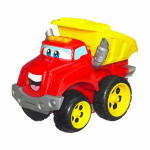 Hara has had some nice momentum lately, most recently landing the city of Philadelphia as a customer. It has signed up some 40 clients — big names that include toymaker Hasbro and Coca-Cola — and tripled its workforce in the last year.  The company, has, however, lost executives to competitors — most notably Enxsuite.

“We opted for a much faster deployment and innovation cycle. It’s still a relatively early market,” Waibel said. “A year ago no one really looked into the value chain capability.”

Indeed, the company is moving at a fast clip. But this new release begs the question: Why would a customer pay for a software that helps its suppliers analyze energy efficiency?

Risk mitigation, for one. As Hara Chief Technology Officer Udo Waibel explains it, the software requires the company and its suppliers to enter data into the system, which the company could then use to project how costs could change in the event, say, oil prices rise. It also allows companies to achiever greater energy efficiencies by casting a broad net that looks outside the company itself.

“At the end of the day it’s purely cost-oriented. If you help your suppliers figure out how much energy they consume and eventually provide them with tools and methods to help improve…the parts that you buy might become less expensive,” Waibel said, adding that Hara developed the new module in response to feedback from existing customers.

Hasbro and Intuit, for example, have already been piloting the new program. Pricing for the software is based in part on the number and type of facilities customers want to analyze.

With this announcement, Hara is also unveiling a number of upgrades – the system is now available in seven languages, a mark of its adoption globally. The EEM software is in use in 94 countries.