Karaoke is an inherently social activity, full of both joy and trepidation. The same holds true in virtual reality, based on my experience with Harmonix Music Systems‘ SingSpace karaoke app for the Samsung Gear VR.

I tried out the SingSpace app with a great deal of embarrassment at the recent Oculus Connect event, along with my colleague Giancarlo Valdes. We sat side by side, singing in different virtual spaces but sharing our pre-song jitters as we began. The VR game is an experiment with how VR can be a social experience and how that social feeling can be different from real-life karaoke.

I sang a couple of songs, including a version of Donna Summer’s “I Will Survive.” Giancarlo belted out Sia’s “Cheap Thrills.” We only had four songs to choose from, but the final version will offer a lot more options when it debuts in 2017. 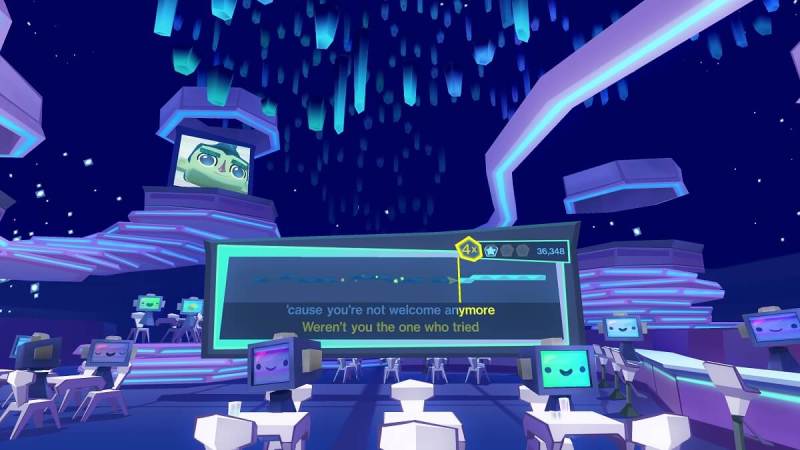 The game takes you to a karaoke space at the end of the galaxy, where you can meet with friends who have animated avatars. It’s not clear exactly how many can join yet, but Facebook demonstrated parties with as many as eight people in the same room. You can also sing solo, which is what Giancarlo and I did.

I arrived in a place with a bunch of computers and proceeded to pick a song. I started singing in a shy voice at first, as the Harmonix people were in the room trying not to snicker. As I sang, the words appeared on the screen, and a ball appeared over each word. I sang the words as close to the right pace as I could, while I heard the music blaring. I got bolder as time went on, singing louder and trying to get the notes right. It wasn’t easy, but I found I could forget about the people watching me and laughing.

For shy people, that could be as liberating as it is terrifying. Sure, some people might laugh at you behind your back. In fact, everyone will. But I decided that didn’t have to bother me. I apparently wasn’t alone, as other people who tried the app were belting out bad songs that everyone in the demo hall could hear.

That experience is different from going to a karaoke bar, where you can see the faces of everybody in the audience.

Here’s the trailer for SingSpace.