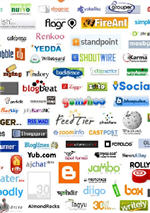 Venture capitalists invested about six percent more into Web 2.0 companies in the first half of 2007, but the increase was attributable to more deals in Europe and Israel.

Notably, early investors in Web 2.0 slowed their pace. For example, Silicon Valley’s Benchmark Capital backed just three deals during the first half of the year, with only one in the Bay Area. In 2006, Benchmark was the sector’s top global investor, with 16 deals. It was a similar story with Omidyar Network, Kleiner Perkins Caufield & Byers and Storm Ventures, the survey found. The data comes from a survey by Dow Jones VentureOne and Ernst & Young.

Is the smart money leaving Web 2.0?

Not necessarily. Sequoia Capital and Draper Fisher Jurvetson, two respected firms, are the most active investors in Web 2.0 globally in 2007. However, both firms invest widely outside of the U.S. Maybe Web 2.0 is over in the U.S.?

Globally, investors pumped a record $646.2 million into 101 deals worldwide in the first half of the year. Within Europe, the United Kingdom posted the most activity, with a record seven deals accounting for $22 million invested. Belgium, Ireland and the Netherlands each saw their first Web 2.0 deal completed in the first six months of 2007, the survey found.

From 2002 to 2006, some 40 percent of Web 2.0 deals were located in the Bay Area. That figure dropped to just 20 percent during the first half. Even New England drew more money for Web 2.0 deals than Silicon Valley, according to the survey.

Finally, valuations of Web 2.0 companies have more doubled over the last year, meaning venture capitalists are having to invest more than double the amount to get the same ownership slice as they did last year. See table below.

Here’s the definition of Web 2.0 used by the survey: “Companies included in this study have a business model that revolves around a dynamic interface facilitating participation through such methods as user-created content, networking, and collaboration. Applications include podcasting, tagging, blogs, social networking, mashups, and wikis. Technologies used in these applications include: AJAX, RSS, SOA, CSS, XHTML, Atom, and rich Internet applications.”

More details of the study here in PDF.