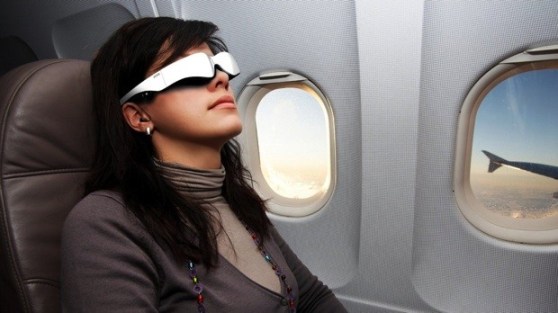 The future of displays is here, and, well — it’s still sort of pricey.

Imaging company Carl Zeiss is finally bringing its Cinemizer head-mounted displays to market, four years after it first introduced them. Retailing for $749, the Cinemizer HUD offers 870 by 500 resolution, HDMI, and the option of a head-tracking add-on.

As you can see in this video, this technology has some pretty distinct applications, including the virtual exploration spaces that don’t actually exist.

But as impressive as the Cinemizer HUD is, it’s also a day late and a dollar short, as Sony’s HMZ HDTV offers HD visuals for only $50 more.

But while Zeiss is a bit late to first round of HUDs, it is far, far ahead of what is likely to be one of the decade’s most compelling new consumer markets: personal augmented reality displays.

Consider the Oculus Rift, which raised over $2 million on Kickstarter last month. Backed by game industry bigwigs like Valve president Gabe Newell and Unity CEO David Helgason, the device has received praise for being one of the first to really push forward head-mounted display technology.

But the naturally giddy anticipation for this technology is tempered somewhat by harsh financial reality: New technology is, almost as a rule, prohibitively expensive for the average person. And that’s heartbreaking.

Fortunately, these things get cheaper as the industry matures and companies scale their operations. So for now we can only wait, wallets in hand, for the future that for now lies only in demos and concept videos.