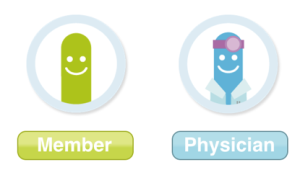 It’s fair to raise an eyebrow when a social network for healthcare comes along, but this network just might make you raise both eyebrows in surprise: HealthTap has created a healthcare social network with more than 5,000 real-live doctors to answer patient questions. Not peers, not “experts” and not brands. Health questions aren’t posted for the world to see or comment on. This is a private network between a patient and thousands of doctors.

“Facebook and Twitter are dangerous for doctors, but everyone wants to take part in social networking,” says HealthTap CEO and founder Ron Gutman, referring to the perils of patient confidentiality and lawsuits for giving wrong advice. Social and medicine haven’t boded well under the shared banner of technology, but Gutman is creating a social environment that works for doctors and patients. 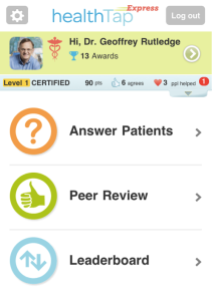 Today HealthTap is launching a mobile app (free) called HealthTap Express that lets users ask any health question and get immediate answers from more than 5,000 doctors for free. This isn’t Yahoo Answers or Quora. Questions asked on HealthTap are always answered by a professional held accountable for their answers, which can be reviewed by peers. These are real, North American-based doctors with licenses and contact information.

Getting these doctors to become part of a social network was no small task. HealthTap began 20 weeks ago (Gutman refers to the time in “weeks,” similar to the way a new parent refers to the age of their child)  as a network for OB/GYNs and pregnant women. This was a smart vertical to tackle first; as many doctors in this field are some of the industry’s most vocal about preventative medicine, patient rights and universal healthcare. Word spread of the network, like it does for all successful social networks, and today HealthTap’s app has grown to incorporate 82 healthcare fields. The app is available for iOS and Android, smartphones and tablets.

To help encourage doctors and patients to participate in the network, the app uses gamification elements. Doctors are able to showcase their specialties in a way that cannot be expressed on review sites like Yelp. They are able to show how much they know and lend a bit of their own voice and style to their profiles and answers. They get points and higher visibility the more helpful they are. There’s the potential for doctors to connect with new patients locally and grow their practice.

Meanwhile, HealthTap patients get free answers to medical questions and can then make the most of doctor-visits. There’s no time wasted, neither the patient’s nor the doctor’s, on general questions. Patients can spend their face-to-face time getting to the root of their medical issues. They can also learn when they can skip a visit or absolutely need to see a doctor. That goes for some of the most embarrassing health questions, too.

“My teenage daughter suggested I start reaching out to teenagers on MySpace,” says Dr. Jeff Livingston who runs MacArthur OB/GYN in Irving, Texas. He was one of the first physicians in the HealthTap network, but has experimented with social media as a way to help people for more than a decade.

“We created a page and suddenly kids started asking questions they were embarrassed about asking in person,” says Livingston. “I think we are in the beginning of the social media revolution. It’s not the technology that’s important. It’s patient engagement. You don’t just go online to read something. You go on to interact; to have a dialogue. Doctors are trying to figure out their social media presence, but we haven’t yet connected the dots.”

Connecting the dots between health and tech hasn’t been easy. This year search and social network giant Google shut down its health records project called Google Health. Social networks for health have struggled to gain acceptance or have failed all together. For example, Trusera shut down in 2009, a year after it go started. Its problem was lack of funding and the shaky foundation of peer-to-peer medical advice (not expert).

Healthcare accounts for almost 1/5 of the United States’ GDP and has been troubled and regulated to the extent that only the most experienced entrepreneurs can cut through the thicket. The cost to entering the industry has been to high, but the potential rewards are higher.

Angel investors are getting more interested in health tech. Esther Dyson, a renowned angel investor, is backing HealthTap. She has also invested in 23andMe and Medstory (sold to Microsoft). Venture capitalists are also starting to invest in health tech, i.e. not just health companies or tech companies.

“We’ve invested in both healthcare and technology and done very well,” says Patrick Chung, a partner at venture capital firm NEA. “But there wasn’t a melding. There was a healthcare investment team and an IT investment team. In the last two to three years we’ve been seeing exciting hybrids of the two.”

Chung says entrepreneurs are now “casting their eyes to the giant, ailing patient of healthcare” and points to companies like 23andMe that have successfully navigated healthcare regulation and carved a path for information that can be acted upon. Lots of smart people are jumping on this bandwagon.