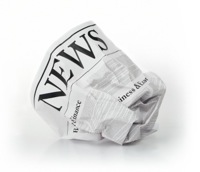 Hearst, the media conglomerate that publishes glossy magazines like Cosmopolitan and Esquire, as well as the struggling San Francisco Chronicle, has announced a bold plan to save the print media’s broken business and content models by importing them wholesale into a device similar to Amazon’s Kindle.

Fortune reports, “Insiders familiar with the Hearst device say it has been designed with the needs of publishers in mind… The larger screen better approximates the reading experience of print periodicals, as well as giving advertisers the space and attention they require.” Because, you see, there has been a great outcry among readers who wish web sites looked more like a real newspapers. Uh, hasn’t there? Ah, well, “designed with the needs of publishers in mind” and all that — who needs readers? I have to wonder, though, how many advertisers will want to buy big, premium ads on devices that no one wants to own.

Perhaps the most baffling part of the announcement is the focus on newspapers and magazines. I’m pretty skeptical that any standalone eBook reader will compete in the long-term against the reading capabilities of the iPhone and other mobile devices (indeed, cell phone novels are already a hit in Japan). Plus, actual books are nearly perfect themselves. But at least the Kindle solves a real problem; lugging around my copy of War and Peace or reading it on my iPhone are both inconvenient, and the Kindle is a nice, light-weight compromise. The problem of reading short articles on a mobile device has already been solved: It’s called Google Reader for iPhone. Not to mention that the Kindle doubles as a newspaper reader too, so Hearst’s device is already a step behind.

Look, as a former newspaper reporter myself, I want print to survive, and I’m glad newspapers like the New York Times are experimenting with promising new models. But this isn’t one of them.