Hearthstone is now six years old, and we’re seeing more experimentation and innovation with how Blizzard Entertainment’s development team are approaching how they design, deploy, and sell the digital card game (which remains a leader in the category, making millions a year through the sales of card packs and bundles). That’s paying off for players, who this year have gotten a new mode (Battlegrounds), in-game economy improvements, and other quality-of-life updates.

And now, as we approach a new year of Standard (the game’s competitive mode), Hearthstone’s adding its first new class with Ashes of Outland, the Demon Hunter, which should shake up all modes more than a normal set rotation does. And as this happens, Blizzard continues regular updates to Battlegrounds, such as adding dragons and Illidan the Demon Hunter in recent weeks.

During the Hearthstone Summit in February, I interviewed game director Ben Lee and production director Nathan Lyons-Smith after a presentation about the new Standard year and hands-on time with Demon Hunter and other new cards from Ashes of Outlands. I was interested in how all of these tied into how Hearthstone’s team approaches monetization, six years after launch, how those strategies have changed, what’s happening with the moribund Arena mode, and more.

GamesBeat: How much does the Classic set still limit your design space for expansions?

Ben Lee: It does to some degree. It depends on the class. Every class is different. In some cases, it doesn’t limit it at all. In other cases, it does it to an extreme degree. Priest, as an example, just wasn’t providing players with a good foundation, so we wanted to rework it. We’ve obviously gone to significant effort on that front. Whereas something like rogue, as an example, rogue based on the Classic set is super-amazing, to a degree where a lot of those cards have seen play in every deck since the game began.

We believe that the game is the most fun when people are trying new things and experiencing new ideas. There’s a fine balance to hit there, where we don’t want these cards to be useless, but we also don’t want them to be the only things you play. Some classes feel pretty good on that front, and some feel on the extreme ends. Rogue is probably — they had an awesome set, and priest had too bad a set.

Nathan Lyons-Smith: You see us addressing some of this in the Hall of Fame choices: Leeroy Jenkins, Mountain Giant, and Acolyte of Pain. Those things do still cause us to have to work around them, so pushing them into the Hall of Fame allows us to explore new things.

GamesBeat: I was hoping that Mountain Giant and Leeroy would get in the Hall of Fame, but I was also hoping Edwin VanCleef would, too. It seems like every set, he comes back in some form or another to vex people. It’s time for rogue to do something else.

Lee: Honestly, we feel similarly. Part of it is when it comes to class legendaries, we want there to be a replacement. Edwin fits into a good category for that at the moment. Edwin was definitely on our short list of things to do, and I would not be surprised if he was on our list in the future. We’ll see how things go for this next year, how rogue plays out. But he’s definitely a card that’s been hotly contested. It’s probably — if there would have been one more card on that list, it probably would have been him. 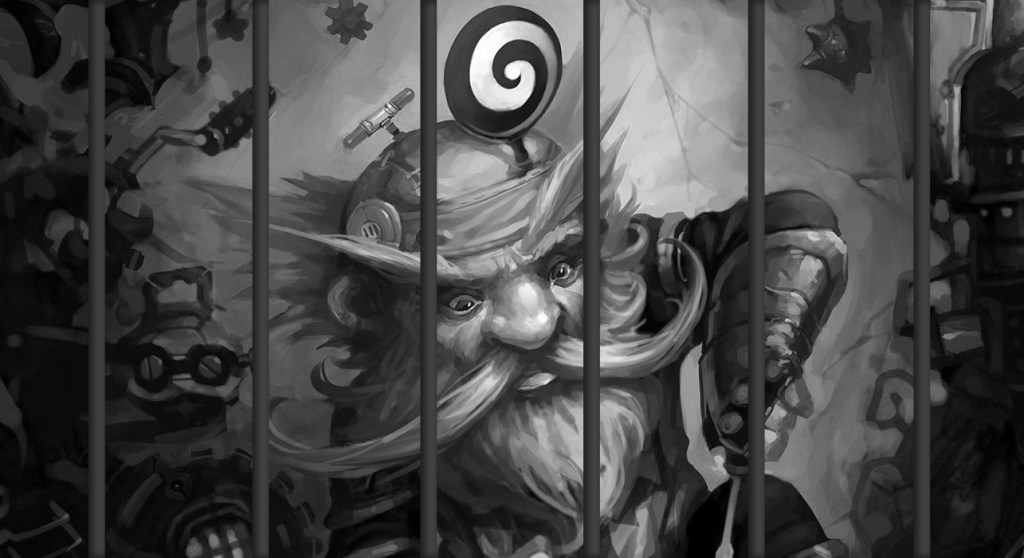 Above: Mind Control Tech is now in Standard Hearthstone prison (aka Wild).

GamesBeat: You said something interesting during the presentation, that Mind Control Tech no longer fits what you want when it comes to randomness in Hearthstone. What does that mean?

Lee: I think that — it’s hard to define what’s good random and bad random. That’s something that’s very personal to most people. But the thing about Mind Control Tech is that it creates so many bad experiences and players remember those. They don’t remember the average result. They don’t remember the beneficial results. They remember the really bad ones. They remember when it took their 8/8, not their 1/1. Even though statistically it probably evens out, it creates a lot of negative feelings. That’s been compounded with the shaman quest, which makes it trigger twice.

If you’re playing the game — at certain points in the game, it’s OK to have big power swings. If you’re at 9 and 10 mana, the cards at that level need to be doing something super impactful to be relevant. But at such a low mana cost, if you can put this thing down and it can steal an 8/8, it just doesn’t feel fun. That’s where everybody was. The point at which that thing occurs in the game in the mana curve, for the result and potential spread of payoffs, it’s just a combination of factors that make it feel pretty negative. We removed it from Arena previously for the same kind of reason. It just doesn’t fit our vision of the future in the game.

GamesBeat: When you talk about randomness, there’s a little control for the player, like with mechanics such as Discovery. You pick one of the three cards it offers. With a spell like Cinder Storm, it does 5 random damage, but you can decide when to play it as a form of control. Mind Control Tech just grabs one of four. There’s nothing you can do besides isolating it to four minions.

Lee: That’s very true. There are some cards that hit on this that we’re OK with. The Warrior’s Brawl would be a parallel to some degree. Brawl can end up in a situation where they lose everything, and you end up with your one minion, even though they have seven and you have one. But I think part of that more is that it’s a class card first of all, so it’s not something you can see across every build, so prevalence is generally lower. Warrior is about control, about board clears, so Brawl makes sense. In that case it’s often used at a point where they’re down in the game, whereas Mind Control can be used — they need to have a bunch of minions, but it’s not necessarily something you use to catch up all the time. It can be a “win more” sometimes as well. There are some things in the game that are similar, but I think even then, those — I would classify most of them as different to some degree.

Lee: A huge amount of our players engage in multiple modes. Our biggest modes are Standard and Battlegrounds. When it comes to [new] PvE content, for a short period of time that’s really big and loads of people play it, which I think you would expect. A new drop of PvE content, you play it, you’re done with it, and you move back to different modes. We’re really happy generally with seeing a lot of players playing both battleground and Standard. Where I personally play it, which is what we see happening a lot, is that people engage in some Standard, and then sometimes, just because of the nature of card games and decks, you might have a frustrating experience. You might lose a game. People don’t like to lose, shockingly. Then you might go play a game of Battlegrounds. The same is true the other way as well. You might have a game in Battlegrounds and lose, and then you just play Standard. We see people moving and mixing between them.

Also, it depends on what we’re updating in the game as well. When we drop the new cards from the single player, a bunch of people go play Standard because there’s something new there. Obviously, when we release an expansion, that happens even more so.

We’ve seen a lot of deep winback from players that churned out of the game two, three, even four years ago. That’s the biggest thing we’ve seen. We see a lot of people who played a lot of Hearthstone, and they’ve come back to check out this new way to play. That’s part of our strategy moving forward, providing these new different ways to play. Honestly, some of these people have played Hearthstone for 1,000, 2,000 hours. At this point they want something new, and that’s OK. We want to try to provide that. Above: Can my beasts beat The Lich Kings buffed-up minions?

GamesBeat: It’s interesting that you say it’s bringing back people. My main question there is, are you finding that they’re just playing Battlegrounds, or are they getting back to Standard and Wild as well?

Lee: We’ve seen a lot of people come back and just play Battlegrounds, yes. It’s not super-common that someone will come back to the game, play Battlegrounds, and then go to Arena. Arena has an upfront cost to enter, whereas Standard, you have a deck, and you probably have some cards or currency left over to make one. Not everyone has the specific amount of gold required for Arena tickets.

Arena is honestly a pretty challenging mode to get into at this point in the game flow cycle. Generally, we see — we want people to come back and play Battlegrounds. It’s totally free and easy to get into. Some of those people have gone on to play Standard, and we think with the launch of demon hunter and the big revamp to our rank system, a bunch of people will do the same thing for Standard.