It’s no secret that despite talk of a tech bubble, the amount of money venture capitalists are willing to throw at startups isn’t showing any signs of slowing down. But a year-end report from PitchBook and the National Venture Capital Association still offered up one surprise: 2017 saw the most capital invested in startups since the height of the dotcom era.

My colleague Bérénice Magistretti and I found that the areas that are seeing the most increased interest from venture capitalists are traditional tech hubs. While the Great Lakes region saw a respectable 70 percent increase in total venture capital invested from 2013 to 2017, the West Coast saw nearly a 96 percent increase during that same time period.

The gap grows even more stark when you look at what’s driving a funding increase in a particular state or city — in smaller markets, a large round from a single company can double the amount of venture capital that market might typically raise in a single quarter. Take Shipt, the biggest success story out of Birmingham, Alabama. Shipt raised a $40 million round in June 2017 — the largest round raised by an Alabama startup in all of 2017. The second largest round raised by an Alabama startup in 2017, according to PitchBook and the NVCA, was IllumiCare, which raised a mere $3.72 million.

The good news is that as more Heartland startups secure funding — even if they are still raising less than their coastal counterparts — it increases the likelihood that the city can produce a success story.  A startup that can bring thousands of tech jobs to a city, and hopefully inspire others in the city to start their own company. It’s a topic VentureBeat will be discussing at our BLUEPRINT event taking place on March 5-7 in Reno, Nevada.

Please enjoy this video from CNBC, “These are the 10 best cities for finding a job in 2018” 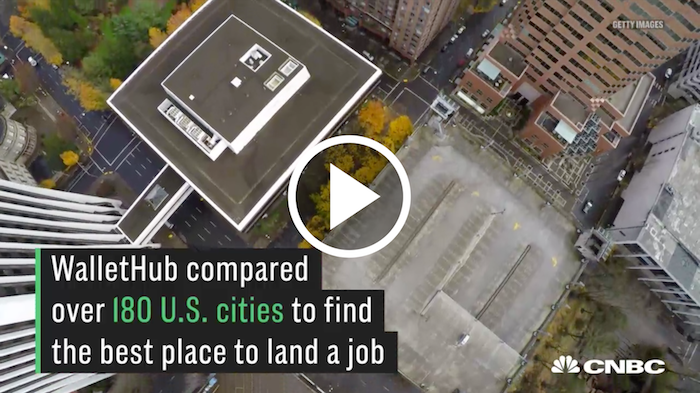 Cleveland founder shares what his startup community gets right and wrong

GUEST: I’ve had a front-row seat to Cleveland’s startup community for the past 12.5 years — as an early employee, founder, executive, educator, and member of various startup-oriented organizations. Things sure have changed since 2005, when there were no accelerators and very few investors and startup support organizations. Generally, back then technology startups were viewed as […]

Startup accelerator Techstars announced that it is launching a new program for insurtech startups in partnership with life insurance giant MetLife. Applications open today for the program — called the MetLife Digital Accelerator — which will be based out of Cary, North Carolina. VentureBeat’s Heartland Tech channel invites you to join us and other senior business […]

The Federal Communications Commission may have voted in December to repeal net neutrality rules, but some U.S. municipalities are still eager to find ways to enshrine net neutrality principles within city limits. This week, the Fort Collins City Council voted to move ahead with a ballot measure approved by 57 percent of voters in November, […]
Read the full story

City developers are betting they can turn an abandoned complex, where General Electric Co. once employed almost 40% of the city’s workforce, into a development with loft apartments, an incubator office space for startups and a food hall. (via Wall Street Journal)

The real future of work

Forget automation. The workplace is already cracking up in profound ways, and Washington is sorely behind on dealing with it. (via Politico)

Why Is the U.S. So Bad at Worker Retraining?

The strategies used to help workers displaced by technology and globalization in the 1980s ultimately failed. So why do the country’s policymakers continue to resort to the same tactics? (via The Atlantic)

An emerging tech hub, Indiana may be on track to become a ‘Silicon Prairie.’ (via U.S. News & World Report)