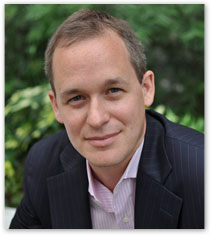 Washington, D.C.-based HelloWallet, which founder and CEO Matt Fellowes describes as “an independent personal finance website dedicated to helping people reach their financial goals,” has announced a $3.6 million round of funding led by Grotech Ventures, with additional investing by Jean and Steve Case. This comes on top of $2.5 million the company has already raised since its founding in 2008.

Fellowes is a rarity in the startup world: A real do-gooder. As a fellow at D.C.’s revered think thank the Brookings Institution, he participated in consumer finance research that found American workers — not just manual laborers but “anyone with a job in this country,” he told me over the phone — waste about $100 billion annually because of poor financial decisions made through insufficient or improper advice. Fellowes estimates that 80 percent of Americans aren’t getting any independent financial guidance at all.

“Thirty-eight billion was spent last year on overdraft fees,” he told me. “Seventy percent of the people who paid those fees have a savings account. All they had to do was pickup the phone and ask their bank to link the accounts. They don’t know.”

Hello Wallet offers its members personalized financial advice for as little as $4 per month. In addition, the 22-person company donates one free account for every four paid subscribers it signs up. Fellowes makes a big deal of the fact that he doesn’t sell subscriber info to financial services companies — a common practice on financial service sites — nor does he accept sponsorships that require Hello Wallet to push one particular company’s products.

“We’re technically a for-profit,” he said, “but we have a lot of non-profit roots.”

Here’s the proof: San Francisco mayor Gavin Newsom announced a plan in March to provide every single San Franciscan with access to financial guidance through HelloWallet. Fellowes has brokered deals with PG&E, SFPUC (the water utility), the Chamber of Commerce, Catholic Healthcare West, California State University, Laborers Union, Walter & Elise Haas Fund, Levis Strauss Foundation and other institutions who will start marketing HelloWallet to San Francisco households later this month. The water utility, for example, will mail a brochure about the offer to all the households it serves.

“People today have access to all these wonderful financial tools,” Fellowes said. “You don’t have to figure it out yourself anymore, the way you used to have to fix your own car. But they don’t know where to start.”