The Internet of Things (IoT) is dramatically accelerating the pace of innovation in the transportation industry—especially the cars and trucks we drive every day. And when you apply the laws that have been driving technology innovation for decades—Moore’s Law and Metcalfe’s Law—it’s not long before our automobiles will resemble smart devices on wheels and your vehicle may very well be the most expensive computing device you own. 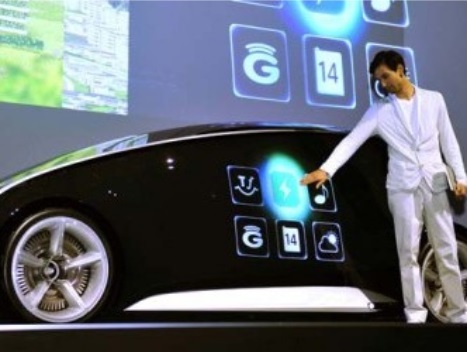 Above: Toyota envisions smartphone technology for cars. (Or is it the other way around?)

Today’s Tesla models are equipped with functionality that allows its cars to be upgraded wirelessly. In late 2013, Telsa tweaked the suspension system of its Model S cars by wirelessly pushing an update that automatically raised the height of the cars when they were being driven at highway speeds. Imagine this being done without a connected car. Owners would have to learn about the need for a change, schedule an appointment, bring their cars in for service, and wait for the work to be done. Most Tesla owners probably didn’t even notice the upgrade.

And soon our vehicles will even look like our PCs and smartphones. Toyota is designing a car that allows owners to change the appearance of the exterior and interior, just as you do with your PCs and mobile devices today. No more decorating cars with soap and streamers for “just married” couples. Now all you’ll have to do is pick the “car top” background you want to display, customize the names, and hit “enter.”

After more than 100 years, cars and trucks are finally at the cusp of becoming true “auto” mobiles by going driverless.  I believe autonomous vehicles will be commonplace by 2025 — just 10 years away. This is because they offer many benefits, including lower energy consumption and fewer accidents.

Autonomous vehicles will free the “driver” and passengers to socialize, have a business meeting, or learn more about the environment around them. Mercedes imagines a car that is more like a living room or boardroom on wheels. The driver and front passenger seats swivel to allow face-to-face communication. 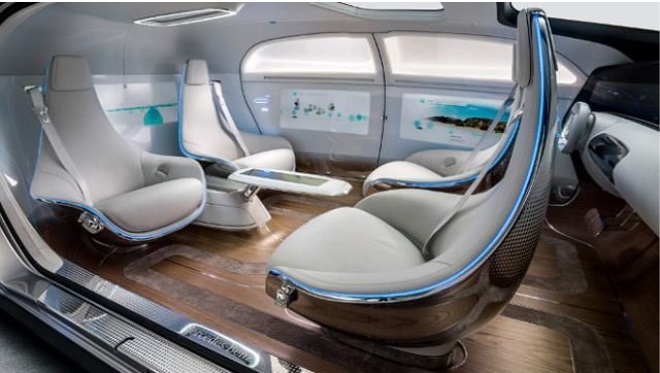 Above: Mercedes reimagines its cars from the inside out with its F015 concept car.

Additionally, cars of the future will be equipped with touch screens on nearly every surface. Imagine your kids looking at a screen of the actual universe above them as you drive to your destination. Perhaps the age-old question, “How long ‘till we get there?” will be a phrase of the past.

Most cars already do some sensing of the environment, such as measuring the outside temperature. There is even an easy-to-use $99 device from Automatic that senses acceleration and braking to help you conserve fuel, reduce maintenance, and drive more safely.  The Automatic adapter plugs into just about any car to unlock the data hidden in your car’s onboard computer. Accompanied by a free mobile app, the device can help diagnose engine problems, display trip logs and mileage, and even call for help in a crash.

But as sensors become cheaper and more capable, cars will become sensors themselves that can not only improve the experience of getting from point A to point B but also help solve some of the world’s most pressing problems.

There are already several apps that help drivers find parking spaces. But imagine a car that could identify an empty parking space as it passes by and then upload that information to the cloud. New and existing apps could then use the real-time data to improve alerts to drivers about open spaces nearby. This new functionality could also help eliminate the time and resources we waste parking our cars.

In fact, one study completed by Donald Shoup, a professor of urban planning at the University of California Los Angeles (UCLA) and published in Time Magazine reported that 30 percent of downtown drivers are just looking for parking and that these drivers rack up more mileage looking for parking each year than the distance of a cross-country trip. The research also found that searching for parking just around the UCLA campus added up to 950,000 miles of travel, 47,000 gallons of wasted gas, and 730 tons of greenhouse gas emissions. And that is just around one college campus!

Now think about our environment from a global perspective. One of the challenges of predicting weather, fire hazards, and climate change, for example are the number of sensors required to get enough data to make accurate predictions. If we add sensors to cars and connect them to IoT, automobiles around the world can become part of the solution rather than the problem. Vehicles with sensors could collect the needed data and send it to the cloud where it would be available for various businesses and government agencies to analyze and use.

In addition to the vehicles themselves, IoT will create connections between and among vehicles and the transportation infrastructure. This connectedness will offer several benefits. If you live in or near a large city, you’ve probably experienced this scenario. Traffic comes to a standstill due to an accident up the road. Soon you notice an emergency vehicle honking and flashing its lights to get vehicles to move out of the way so it can get to the accident scene as quickly as possible.

As transportation becomes more connected through IoT to create a coordinated system designed to get everyone safely to their destination on time, scenarios like this will be a thing of the past. Sensors installed on the vehicles in the crash could send a signal that alerts nearby vehicles about the problem, enabling them to slow down or take an alternate route.

Already, Google uses the GPS information from Android phones to compare posted speed limits to how fast drivers are actually going. It then uses this information to color in Google maps that show the severity of traffic delays. When fully functional, this type of IoT scenario could save approximately 30,000 lives and avoid 2.12 million injuries each year, according to Morgan Stanley.

Now consider unmanned aerial vehicles commonly known as UAVs or drones (badly in need of a new name in my opinion). These remotely controlled vehicles are becoming commonplace. Poised to challenge our definition of transportation, drones will significantly enhance company supply chains and logistics operations by delivering smaller items within the last mile of the transportation system.

While many people have dismissed Amazon’s drone delivery plans, I believe Jeff Bezos, founder and CEO of Amazon.com, is just scratching the surface of what’s to come. Drones will also transform the way goods are delivered across long distances. Do you remember this vehicle from the movie Star Wars? 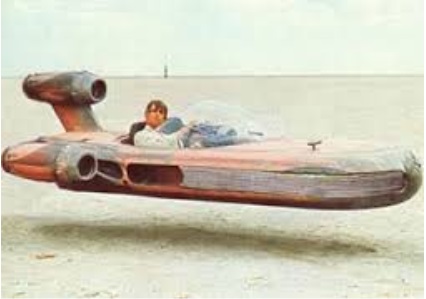 Above: Did Star Wars predict the long-haul delivery drones of the future?

In the near future, drones will have the ability to carry huge loads while hovering just a few feet above the ground. These drones could be remotely monitored and guided using a system of sensors on special cross-country or intra-city roadways.

Andreas Raptopoulos, CEO and founder of Matternet, is already working to create a transportation system for physical goods that operates on the same principals as the Internet.

In his YouTube video, Raptopoulos describes the concept this way. “The enabling technology is the UAVs. We want to harness all of the great work that has been happening in academia in the open source community and build a platform that can allow us to do point-to-point delivery, decentralized peer-to-peer just like the Internet.

“The second vital ingredient of the network is the automated ground stations we use. These are point stations on the ground that the UAVs fly in and out of in order to swap batteries and fly further or exchange loads.

“The third [component] is the OS [operating system] that runs the whole network, that optimizes routes, optimizes the flow of vehicles and goods through the system. It optimizes for weather conditions and guarantees the security of the system so we can guarantee to the authorities that it’s not being used for illegal purposes.”

This is a smart approach.

The company just announced Matternet ONE, the first smart drone for transportation. The drone is being evaluated by the Swiss postal service, Swiss Post, to deliver mail and packages to its customers. Earlier versions of the drone were used in Haiti to deliver needed supplies to people in inaccessible areas of the country.

Above: Matternet ONE has completed three tests with Swiss Post to deliver small packages.

The recent hacking of a Jeep Grand Cherokee has been widely reported. Thankfully, this hack was accomplished by the good guys, with the information already being used to improve automobile security and safety. Even so, the risks of hacking are very real, especially as more and more things become part of IoT. 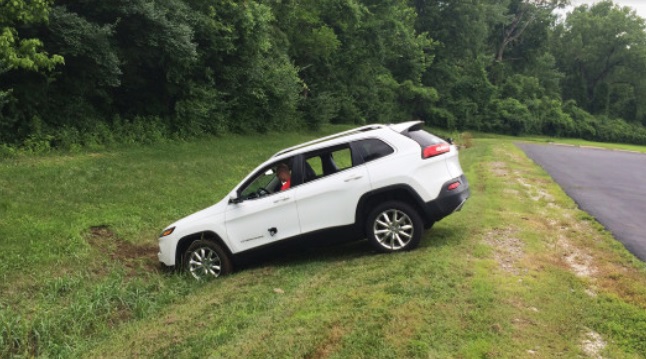 Above: Hacked Jeep Cherokee ends up in a ditch after the brakes were remotely disabled. Photo by Andy Greenberg of Wired

If connected cars are to become fully mainstream, much more work is needed to ensure that they are safe, reliable, and highly secure. After all, it’s one thing for a computer to crash, it’s another thing when the computer in your car is compromised and causes an automotive crash.

There are already several companies and consortia focused on transportation security in an IoT world. Intel just launched the Automotive Security Review Board (ASRB), a cyber security group and industry board to identify and thwart significant security threats for connected cars. Automobile manufacturers such as GM, Fiat Chrysler, and others are also taking the threat more seriously.

The Internet of Things (IoT) has the power to change our world. And while we are starting to see the incredible impact of IoT, we are still very much at the beginning of this transformational journey.

The key to knowing how IoT will transform our world, is understanding that it’s more about the connections than the things. When things are connected, they become greater than the sum of their parts. They gain access to data they do not possess, and can share their own data with other people and things.

So the next time you drive to work or go on a road trip, just take a second to imagine what your vehicle could do with even more IoT connections.

David Evans is cofounder and CTO of Internet of Everything startup Stringify.