2013 was a big year for Foursquare, and arguably its most important. The company completed its transition to a location discovery service, finally started building its small business ad platform, and raised $76 million ($41 million of which was debt). 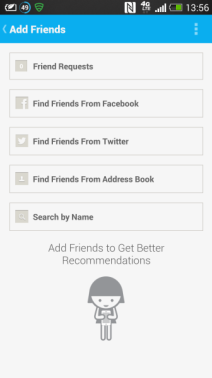 Above: This doesn’t quite work.

The company’s moves were also accompanied by a new cadre of apps that support the new discovery-focused Foursquare. Apps such as the one for Windows 8 are all about showing off the best of what Foursquare has to offer: pretty pictures, smart recommendations, and detailed venue info.

One thing, however, still feels out of place: Foursquare’s friend system. Like Facebook’s system, Foursquare’s model is symmetrical: Two people decide to friend one another, and each sees in their feeds where the other has checked-in.

For the most part, the system works. It’s nice to always have a beat on where my Foursquare friends are checking in, even if those places are rarely more exiting than the local Starbucks.

At the same time, that’s exactly the problem. Considering that my Foursquare friend count has never topped 10 people, it’s rare that I’m ever finding anything new and exciting through the Foursquare activity feed. It’s just not conducive to discovery, which is odd considering that discovery is exactly what Foursquare is focusing on right now.

The fix: Foursquare Followers, not Friends

Sachin Agarwal, a product manager at Twitter (and founder of Twitter-acquired Posterous), proposes a really smart fix for this: Make Foursquare’s friend system more like Twitter’s follower system. “This would let me follow chefs, travel experts, celebrities, or anyone else who I think might have good recommendations for me. Even if my friends aren’t on Foursquare, I should get great recommendations for places to go,” he writes.

This is exactly right. One of Foursquare’s biggest problems is that it’s constantly grappling with the notion that no one’s using it. (That company has been notoriously secretive with its active user counts probably doesn’t help its case. )

Shifting the format so that people can follow the recommendations of famous people would bring a certain kind of life back to the service, making it even more likely that Foursquare will be the first service people turn to when they’re looking for a place to go.

The model has worked remarkably well for Instagram, Pinterest, and Twitter, and it’s easy to see how it could be a big deal for Foursquare, too.

Update: Something that I hadn’t considered initially were the issues related to privacy and the nature of creating a public-facing record of your real world activity. This is what separates Foursquare from Twitter: People may be comfortable with having everyone know their real-time thoughts, but they’re less likely to want everyone to know their real-time location. “Foursquare followers” has a certain scary ring to it, now that I think about it.