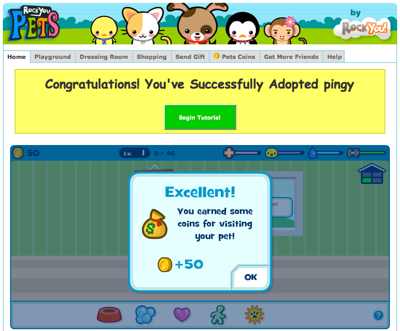 Facebook is planning some form of virtual currency that third-party developers can use, and so is MySpace — but smaller rival Hi5 has already beat them to it. It has just launched its first integration of its site-wide currency, “Coins,” in a game built by app developer RockYou, called “RockYou Pets.”

In the game, you can earn points by doing things like visiting your virtual pet every day, then you can use these points to do things like buy virtual clothes. It’s similar to a wide range of other pets games on social networks, like (fluff)friends on Facebook — and something that users have long loved playing, and paying for.

The game makes money by letting users buy coins with real money, or earn them through through taking advertising offers, like most other gaming applications on social networks. Hi5 and RockYou will share revenue. Eventually, Hi5 will open up its currency to other application developers. The social network is also making it easier for people to find third-party games like Pets through letting them immediately start playing a game without having to go through the extra step of clicking to install it — unlike Facebook and MySpace.

This is all a part of Hi5’s ongoing effort to go from being a plain-vanilla social network into what it calls a “social entertainment” site. It first introduced Coins last December as part of its in-house virtual gifts store. Then it introduced a gaming sub-site in February. Since then, it has been inking partnerships with gaming syndication companies like Mochi Media to increase its game inventory, and payment service companies like Playspan to facilitate virtual revenue. In the future, it also plans to come out with more full-blown entertainment-style features, like avatars for users.

With around 63 million users — mostly in countries around Latin America and scattered elsewhere in the world — virtual goods could be a way for the San Francisco-based company to start making more money. Its users aren’t, unfortunately, typically wealthy enough to attract a lot of advertising dollars. The company had to lay off around 40 percent of its staff partly as a result of its trouble monetizing. It has previously said it expects to make $25 million this year, half from advertising and half from virtual goods.