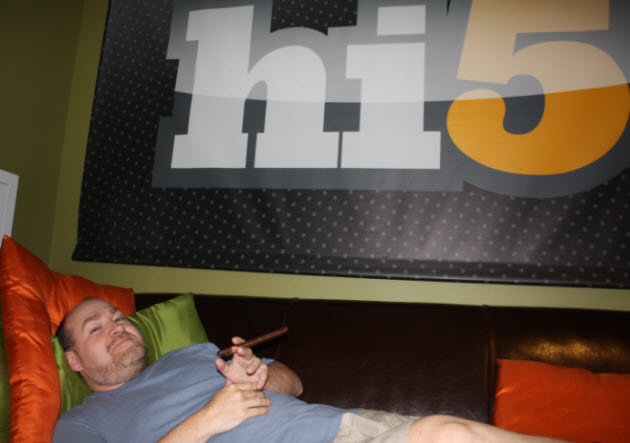 Ever since Alex St. John joined Hi5 as president last fall, he has been promising to stick it to Facebook, the social network that dwarfs the size of his own company’s user base by 10 to 1. Now we’re getting some follow through on the first part of his evil plan to take over the social gaming world. Today, the company is announcing SocioPath, a next-generation social gaming platform. 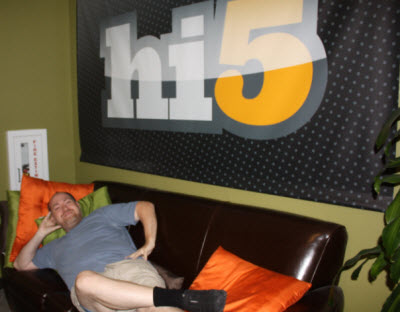 As you can tell from the pictures here, St. John is a bit of a character — charming or obnoxious, depending on your point of view. It’s hard to take him seriously, considering his stunts such as taking on a professional sumo wrestler.

But the president and chief technology officer of San Francisco-based Hi5 has to be taken seriously. Top social game developers Playdom (which has been bought by Disney), Bigpoint, Digital Chocolate, Casual Collective, Portalarium and others are hopping on board with Hi5’s new game platform.

Hi5 has only around 50 million users compared to Facebook’s 500 million. But St. John has been busy revamping the site and its development platform to become a haven for social game companies, particularly those who fear Facebook has become too powerful and are chafing about restrictions Facebook has placed on game developers.

SocioPath is designed to free developers from their dependence on social networks such as Facebook for viral audience acquisition. Games spread fast on Facebook because friends share them with friends. But in the name of protecting its users, Facebook has been curtailing what game developers can do to spread their games through its network. But the developers can’t leave because Facebook owns the friend relationships.

SocioPath has multiple parts to it. Earlier this year, Hi5 launched a developer portal and Facebook-compatible applications programming interfaces. That meant that any game written to run on Facebook could also run on web sites such as Hi5. In the coming months, Hi5 will roll out the SocioPath beta platform to a select group of partners. More pieces of SocioPath, which St. John has nicknamed the anti-social networking platform, will roll out over time. The aim of the platform is to allow games to be distributed in a viral fashion without tying them down to Facebook.

SocioPath includes a clever way to spread games rapidly. Facebook uses an automated feature called a “contact importer” to help spread itself rapidly. When you sign up, it looks at your email directory and asks if you would like to invite people to become members of Facebook. The importer checks to see who among your friends is not a member and sends invites only to those who are not members, with your permission. This importer automates the process of inviting people and is one of the biggest reasons that Facebook grew to 500 million users.

When a player joins a game that is SocioPath-enabled, Hi5 asks you for permission to spread the game to your email, instant messenger, Facebook, or Twitter contacts. SocioPath allows you to play the game without going through a registration process and without having to give your real name. Once you want to save your progress in the game, it then asks you if you will register. That way, players can try out new games without having the barrier of registering for them first. For the game company, the good thing is that it can send messages about the game to the user and the user’s friends, from directly within the game. That keeps gamers engaged in the games. Once the user is registered, games can be promoted across networks and purchased without the user having to go through another registration process.

Games can also create their own stores, and SocioPath allows the import and export of virtual goods into social networks. The implementation work is minimal for those using the Hi5 Facebook-compatible APIs. St. John said that these features will break down a lot of barriers that stop users from adopting new games. One of the big barriers is Facebook’s requirement that you play a game under your real name; Hi5 will let you play anonymously if you wish.

The Hi5 system could break Facebook’s lock on developers in this way, said St. John. By embedding the contact importer and the ability to send invites and messages to friends inside a game, the game is no longer reliant on Facebook, Hi5, or any other social network for a friends list. You can pull in friends from other games such as World of Warcraft, or any other game or network that Hi5 builds a contact importer for. The importers are not yet completely built, but Hi5 is working on them.

Besides those already mentioned, other game developer partners include Slingo, TheBroth, Sneaky Games, HitPoint Studios, Minsh, and HeyZap. Trip Hawkins, chief executive of Digital Chocolate, said that his company’s Millionaire City game will have access to powerful messaging systems, invitations, notifications and gifting mechanisms via SocioPath. Game companies who are members of SocioPath will find they get new game players from other game companies who are members of SocioPath, allowing for cross-game pollination.

Hi5 was founded in 2003 and has been particularly successful snaring overseas users. St. John said the company has overhauled its infrastructure to handle modern virtual goods transactions and e-commerce. The company raised $14 million in a second round of funding in July.