Hideo Kojima, creator of the Metal Gear Series games and who recently parted ways with Japanese publisher Konami, was inducted into the Hall of Fame at the DICE Awards, the equivalent of the Oscars for games.

In an event at the DICE Summit at Las Vegas, Kojima was honored by his peers at the Academy of Interactive Arts & Sciences. Kojima finished his work on Metal Gear Solid V and left Konami to create a new startup, Kojima Productions, which is making a game for Sony.

“Hideo Kojima has been the standard bearer for the very best that game development has to offer,” said Guillermo Del Toro, the filmmaker who presented the award to Kojima. “There is nothing in his stories that he does not love and feel strongly about. He believes as I do, that we must cherish this medium.”

He added, “Kojima-san is also an awesome pal and is great to hang out with.”

Kojima has been making games for almost 30 years. In college, he studied economics, but he fell in love with games. He took over the Metal Gear series in 1987, and the game had instant acclaim. Mark Cerny, a veteran game creator and architect of Sony’s PlayStation 4, said in a video, “As a game designer, you can get a lot of inspiration from what Kojima is doing.”

Kojima appeared at the event during the day to speak on stage with Del Toro. 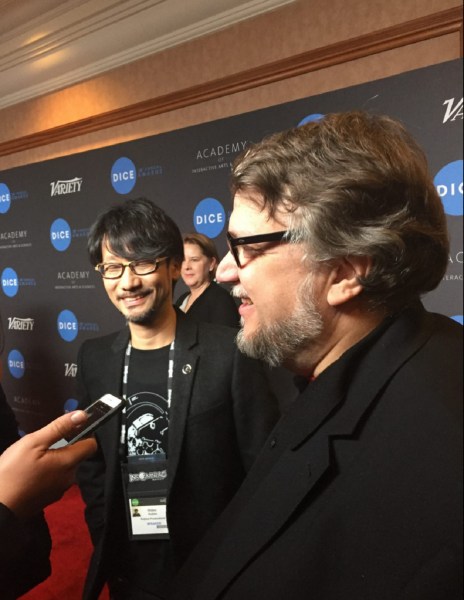 Above: Hideo Kojima and Guillermo Del Toro at the DICE Awards