LAS VEGAS — Two of the rock stars of entertainment, Metal Gear Solid video game creator Hideo Kojima and Pacific Rim film director Guillermo Del Toro, talked about being a creative person in a conversation at one of gaming’s elite events today. Kojima, who spoke onstage for the first time since leaving Konami and his beloved Metal Gear Solid series behind, said he feels “extremely free” in his new studio.

Del Toro and Kojima sat onstage for an interview with game broadcaster Geoff Keighley, president of Gameslice, at the DICE Summit game event in Las Vegas today. The two entertainment creators became fast friends over the years, and they said they have tried to inspire each other to create great things. They said that mattered a lot as Kojima struggled with Konami and tried to finish Metal Gear Solid V while he was exiting his long relationship with the Japanese video game publisher.

Kojima is one of the biggest names in the game industry. He’s worked on Metal Gear since the series first appearance on the Nintendo Entertainment System in 1987. He’s considered among the top auteurs among game design’s heaviest hitters. Del Toro shares that reputation for films such as his Pan’s Labyrinth, and he’s a geek-culture favorite for his Hellboy flicks.

Keighley asked why Kojima left Konami and started a new startup to make games for the PlayStation 4, the top-selling home gaming system (Sony’s platform is also the traditional home of Metal Gear Solid). When Kojima was going through that hardship, Del Toro inspired him to keep going. It was, Del Toro said, like the time when the film director struggled through the making of Pan’s Labyrinth. During that movie, Del Toro said he lost 100 pounds and was getting two to three hours of sleep a night.

Kojima said he considered making an indie game and taking his new opportunity slower. He thought about making a film, but he said that all of his fans said they wanted him to keep making games and he decided he should get back to it sooner rather than later.

Asked why he works on multiple projects at once, Del Toro said that he may have a half-dozen movies in the works … and only one of them gets made. He has co-written 24 screenplays and only made nine movies, he said. Each screenplay can be a year and a half of work.

“A quarter of my life has gone into projects that haven’t happened,” Del Toro said.

“I feel extremely free right now. I am trying to make a big game with a very small team. I am doing exactly what I want to do,” Kojima said through a translator about his new Kojima Studios company.

But he also has to be careful. 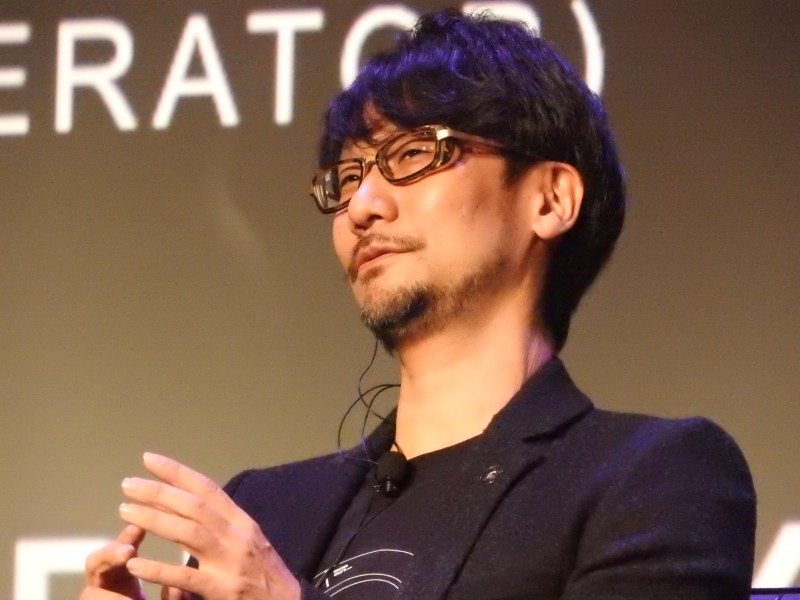 “I have no intention of changing anything in order make it sell more,” he said. “I want to create something that I want to play.”

Del Toro acknowledged all of the pressures of money on creativity. But he said that creative professionals should never short change themselves on the level of their artistic ambition.

Del Toro and Kojima met in 2008 while the Japanese designer was making Metal Gear Solid IV. In 2009, Kojima went to Del Toro’s “man cave” and saw his game room. They went to dinner and hit it off.

“Hideo has chosen a medium where he works as a director and game maker, but also works as a film maker and writer,” Del Toro said. “It’s a world that is so complete, and a world where you can recognize his voice when you play the game.”

Kojima said he respected Del Toro as a director and a creator of films such as The Devil’s Backbone.

“Having these kinds of characters and moments, I don’t think that was possible,” Kojima said. “He throws in violent moments but he also has something beautiful. That makes his movies unique and beautiful.”

“He has toys that I want,” Del Toro said.

Kojima said the difference between games and movies is that you can’t force a person to be something that they don’t want to be.

Asked what he was watching, Kojima said he admired Son of Saul.

Ted Price, head of Insomniac Games, said in an interview that he enjoyed the talk because it was so rare to see two creators so authentically interested in each other’s crafts.” 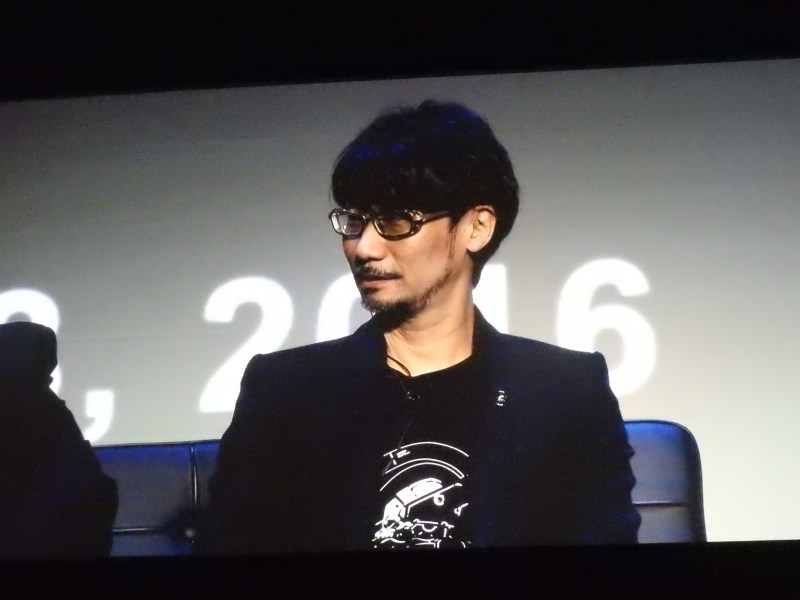 Above: Hideo Kojima at the DICE Summit 2016.