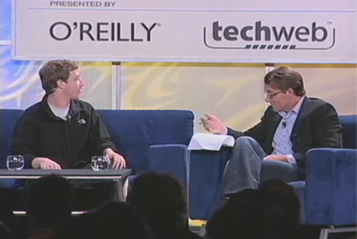 Leading social network Facebook tried to buy popular micro-messaging service Twitter a few weeks ago, BoomTown reports, confirming a previous suggestion of the deal. It apparently didn’t work out because Facebook offered Twitter $500 million in stock at its preferred-stock valuation of $15 billion, not its common-stock valuation of somewhere between $4 billion and $5 billion. Twitter wants more equity — and cash — according to Swisher.

Facebook may have offered up to $100 million in cash, The Deal hears. Which still wasn’t enough. Meanwhile, Facebook may only be making between $250 million and $300 million this year, mostly from ads, while Twitter is making next to nothing. Nor is Twitter’s path to revenue clear.

Neither company seems especially focused on revenue, though. That’s because both companies think they’re in the midst of capturing the future of communication, with growth rates that seem to prove it. Both companies hope to make lots of money, later.

Facebook sees itself as the central provider of “social context” about the world around you. It dominates real-world communities like college campuses. Twitter, on the other hand, is increasingly at the center of information-sharing around the web. It is the only other company that appears to be seriously competing against Facebook in its self-proclaimed mission of helping people share more information with each other.

The negotiations, which began in mid-October, broke off in early November, around the time an acquistion offer was previously mentioned — when John Battelle interviewed Facebook chief executive Mark Zuckerberg at the Web 2.0 conference. In hindsight, that conversation revealed not only why Facebook might want to own Twitter, but how it sees Twitter as a rival. Here’s the excerpted transcript (starts at 22:14 in the embedded video, below):

MZ: Oh that’s tough. I think they’re doing really good stuff. I’m really impressed by what they’ve done. Is it a feature? I think that they’re building something pretty cool.

JB (shaking with excitement over the following): Is there a build-buy spreadsheet in [Facebook chief financial officer Gideon Yu’s] office around Twitter?

JB (interrupts): Help me out, whose office is it in?

MZ: ….It’s an open-floor plan. We have status updates and wall posts and all these things, too. [Twitter has] a very elegant model.

So Zuckerberg was impressed by Twitter. Here’s why. Facebook is a full-blown social network that includes features for uploading photos, sharing links to articles, listing detailed biographical information, and much more. Twitter, meanwhile, is almost entirely focused on sharing information — Facebook’s self-proclaimed mission. You post short (140 character) messages responding to the site’s question of “What are you doing?” If you want to share anything else — say photos on Flickr, videos on YouTube, news articles, or whatever — you can just post URLs directing your Twitter friends to those sites. Twitter’s user profiles are extremely limited: Just your chosen name, location, website and a short bio.

While Facebook wants to encompass real-world communities, Twitter doesn’t bother. The result seems to be that entire college campuses, companies, large portions of cities, and other geographic communities are on Facebook, while large portions of, well, early-adopter tech geeks are on Twitter. Facebook has more than 120 million users, and is growing fast around the world. Twitter has an unknown number of users, mostly because many access the service through its application programming interfaces (APIs) and not the web interface itself. It’s certainly a small fraction of Facebook’s. But it is also growing fast around the world.

This growth occurs in spite of Facebook’s ongoing efforts to duplicate Twitter’s features, as Zuckerberg hinted at above. Facebook introduced its “status updates” feature in the spring of 2006, around the time that Twitter sprang into existence. At first, status updates were just short lines within user profiles. A year later, though, Facebook gave status updates a massive overhaul, as described in a shot-across-Twitter’s-bow company blog post entitled “What is everyone up to?” The details of this status-message upgrade, as Facebook’s post described, were very similar to Twitter.

All that wasn’t enough. Twitter continued to get more and more mainstream attention (to the degree that some celebrities and a few national news stations have begun using it). Facebook followed by implementing a major redesign of the site this past fall, defocusing the site from user profile pages to refocus on the feeds concept. As part of that, it made status updates a prominent new feature. The top of the user profile page became a giant box where you could leave status updates, or share information like links to other sites. More recently, the company’s iPhone application has continued to focus on status updates — to great effect.

Now, Facebook is trying to bring its “social context,” like who your friends are, to other sites, to the web through Facebook Connect. Twitter, meanwhile, has long offered an API that lets other sites integrate it users’ messages. FriendFeed, a site that lets you aggregate your activities from across the web — somewhat like Facebook’s news feeds — lets users access Twitter. Twitter, because of its micro-messaging nature, appears to drive the single largest portion of usage on FriendFeed site (that’s what I’ve seen from watching my FriendFeed stats and from what others have told me).

The race for status

Cue an earlier part of Zuckerberg’s conversation with Battelle at Web 2.0 (see around 16:00 in the video):

As time goes on people have shared more and more information. There’s this clear trend towards that. We looked at where things were last year, with each of our applications — whether photos or groups or videos or whatever it is — representing one way to share information. We realized there was no way we were going to build every way that people wanted to share information. Therefore, we built this platform. Over time, we just expected it to get more and more decentralized. And the next iteration of that is Facebook Connect….

I just think that as time goes on, we’ll see this very natural fanning out, this decentralization of things. I view it as a big part of Facebook’s role in this ecosystem to continue pushing that, to continue making it so that more people around the world can bring all of this information to these different places. You know, there’s a rate at which this will happen and if we’re not on the edge of pushing this out, then we’re not doing our job. [Emphasis mine — ed.]

In other words, Facebook designed its platform to recreate a version of the web within the site that mimicked other sites on the web. Instead of photo-sharing sites like Flickr or Photobucket, you have Facebook’s own Photo application, as well as other multimedia Facebook applications of various sorts. The social connections has helped Photos grow much larger than Flickr, but Facebook’s internal site was inherently limited by Facebook’s own site design. The rest of the web provides a better opportunity for Facebook’s social relationships to spread everywhere.

But Twitter, itself a much looser network of social relationships, is already connecting with the rest of those sites. The killer feature for social sites seems to be status updates — perhaps analgous to how search was the killer feature to help users find their way on the web (a fascinating comparison made by Alan Patrick at the blog Broadstuff earlier today).

The question is if Facebook can do the better job of applying its real-world social connections, its mass of data about photos and everything else to the rest of the web through Connect. The service is slated to fully launch later this year, with some sites — like local review site CitySearch — already publicly testing it.

This is why Facebook’s attempted purchase of Twitter makes sense. Facebook is far larger, but it’s clearly not been able to put a damper on Twitter’s buzz. Now, Facebook’s expansion efforts are trying to put it where Twitter already is: On the rest of the web.