In the cloud-based file storage world, one of the first was a company called YouSendIt. The intention was to let you share files that were too big to send via email. But a lot has changed in the 11 years since its founding: For starters, it’s no longer YouSendIt — it’s now known as Hightail, having rebranded in 2013. It’s also not the only game in town anymore thanks to the rise of Dropbox, Box, Microsoft OneDrive, Google Drive, and Amazon. So what’s the company up to now?

As it turns out, Hightail hasn’t gone the way of the dinosaurs, but is in fact profitable and appears to be doing pretty well. So well, in fact, that today it’s launching what it believes is a “new course beyond file sharing.” It’s a evolutionary look at how we interact with files, and it’s called Hightail Spaces, a collaborative workspace specifically geared towards creative professionals. Ranjith Kumaran, cofounder and chief executive of Hightail, told VentureBeat that with 80 percent of the company’s revenue coming from the creative space, the time is right to put all their energy into helping ad agencies, web designers, filmmakers, marketing departments, and other studios work smoothly with one another. The concept appears sound: Imagine getting a slew of emails with multiple attachments, all that require feedback. You would have to download them, mark them up, and re-upload and send them back. Chances are that somewhere along the way, people will lose track of what is being said.

Hightail Spaces is a visual representation of any project. So instead of having to constantly download files and upload edited ones, the entire discussion and feedback loop can take place within a so-called Space. It provides you with rich, contextual feedback, while also enabling commenting and a preview system that lets you view and mark up any Adobe file type, photos, videos, and documents. There’s also an integration with Dropbox and Slack, with Google Docs and Microsoft OneDrive support coming soon. 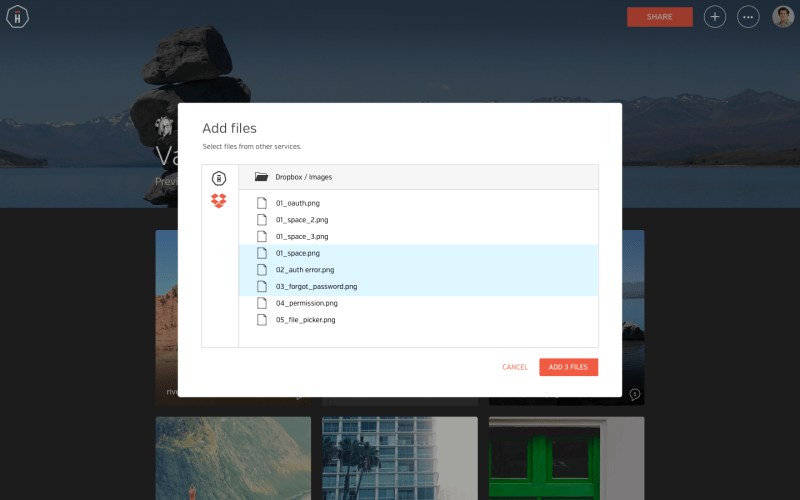 Think of a Space as a project repository for your large files. There’s some very basic project management tools you can employ like assigning tasks, but you won’t see features that typically clutter up Microsoft Project (no Gantt charts here). Users can also forward emails directly to a Hightail Spaces email address and within minutes, the system will build a Space around the contacts and attachments from the email (the message itself is left off).

Users can also take advantage of dashboard analytics. Metrics tracked include how many people have shared content for a project, have been given access, and more. The idea is to better understand which projects are succeeding and which ones aren’t.

“In the very near future, the inefficient system of collecting feedback by sharing files back and forth, whether by email or other cloud services will be as outdated a concept as sending a fax,” Kumaran said in a statement. “Many people, particularly creative professionals, want more than shared links and emailed notes. They are naturally visual communicators. They want feedback in real-time and they want their teammates or clients to be able to point directly at a color, music cue, or graphic that is either amazing or could be better.” 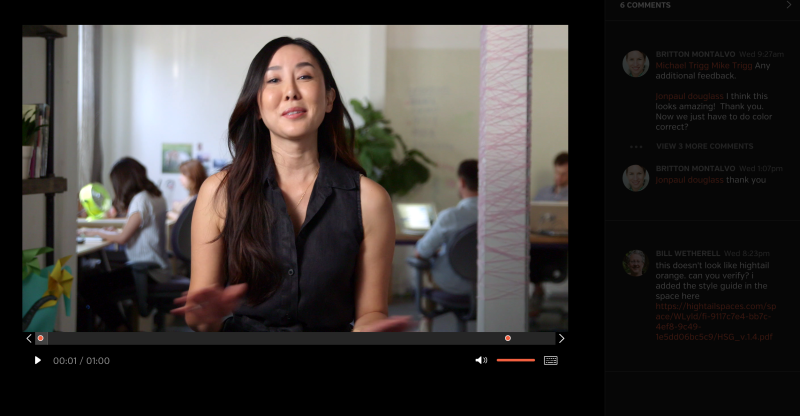 It appears Hightail is looking to evolve to become more about helping you manage the logistics of your files. But is it too late for the company, especially given that the market has been incredibly saturated with similar services? Kumaran doesn’t think so — he believes that while Dropbox and Box are both huge firms, they’re trying to be something for everything: “It’s hard to fight on multiple fronts.” Instead, Kumaran feels that by sticking with a very active vertical, his company can provide a best-in-class service that fulfills a need.

Based on the demonstration that I saw, Hightail Spaces is visually appealing, but this release seemed wanting. Creative professionals will surely benefit, but some of these features are available on competitors. Another downside is that while Spaces is available on Hightail’s iOS and Android apps, it’s only for phones, not tablets — when tablets have become the device for creatives. When it comes to quickly making edits and offering feedback, doing so on a small screen like the iPhone can be difficult.

Hightail Spaces is moving the company in the right direction, but it’s yet to be seen how quickly growth will occur. This release is also the first major undertaking by Kumaran since he reclaimed the leadership at Hightail following the departure of Brad Garlinghouse. At the time, Garlinghouse’s departure was attributed to “sharp differences of opinion”; Kumaran told us that the board felt that Garlinghouse was focusing too much on improving the message Hightail was trying to make and not the product and that’s why he was brought back.

To date, Hightail has over 50 million registered users and revenue of $50 million. At least 80 percent of that money comes from creative professionals.

So what’s the cost of using Hightail Spaces? It’s free for unlimited file storage and projects, but you can only have a maximum of two active at any given time. For $15, you’ll get the same thing but more support for high-definition videos. There are also team projects that are charged based on the number of seats, which run between $5 and $10 each.