There’s Trump Text, a Donald Trump imitator that sends you quotes of controversial things he has said, and there’s also I Will Vote, a voter registration bot on Facebook Messenger that says it can answer your questions about voting.

When I asked the bot, “How do I request an absentee ballot?” I got a link where to request a vote-by-mail ballot. However, when I asked, “Where do I vote?” and “Can I vote early?,” the bot was unable to answer my questions.

A Clinton campaign spokesperson told VentureBeat that the bot should be able to answer both of the latter questions.

I Will Vote says you can ask it “any questions you have about voting.” It’s true, you’re free to ask it anything you want, but that doesn’t mean it will answer you.

I asked this bot questions like “Who is Hillary Clinton?” and “Why is it important to vote?” more than 36 hours ago and have received no response. I Will Vote says it’s “looking into that” and offers to “get more help,” but after a day, I still have no answers. 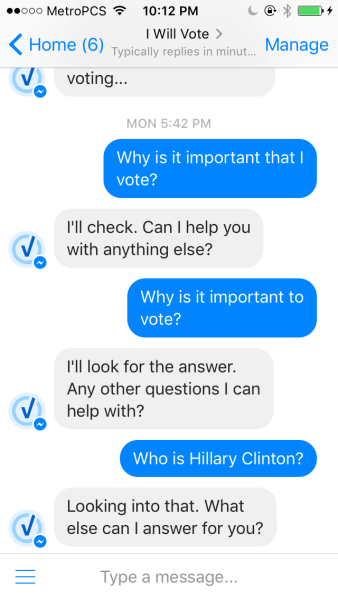 Above: A screenshot of the conversation with the I Will Vote Facebook Messenger bot

It seems that once you register to vote, update your voter information, or verify that you are registered to vote, the I Will Vote bot has done its job. The bot is only a day old, and it accomplishes these core functions well. The question-and-answer feature seemed like a great idea at first, but as it stands, it feels like a waste of everyone’s time.

More than half a dozen bots have been made by the Clinton campaign or supporters in recent weeks, like the HelloVote and HillYeah bots for voter registration. Like Text Trump, BFF Trump (one of the most popular bots on the Botlist directory in recent days) sends jaw-dropping Trump quotes with the goal of reaching millennial voters.

The Clinton campaign tech team has attracted former employees of Google, Twitter, and Facebook, according to Wired magazine.