Hired, a recruitment marketplace that connects companies with technology talent, has announced that it will now help its customers assess and screen potential candidates.

Powering this new service is San Francisco Y Combinator alum Py, which Hired has acquired for an undisclosed amount.

By way of a quick recap, Hired differs from many other recruitment platforms insofar as applicants don’t apply to companies for jobs — instead, companies apply to hire people. Candidates put themselves forward for any number of positions by creating a profile that outlines their skills and experience, and then companies make an offer if they like what they see. The beauty of this platform, from a worker’s perspective at least, is that they can compare offers and take their pick. Hired has raised in the region of $130 million since its inception in 2012, including a $30 million tranche last summer.

Py graduated Y Combinator in 2017 and at that time offered a mobile app to teach the fundamentals of coding. The startup has since shifted its focus to provide an evaluation tool that helps companies assess engineers’ skills. Py offers a number of tools to simulate real-world challenges, while a product called LivePad allows companies to interview would-be hires in a live coding environment.

In its short life so far, Py says it has garnered 500,000 users and works with such clients as Wag, Opendoor, and Niantic to help them screen technical talent.

As a result of this acquisition, the entire Py team — including founder Derek Lo — have been hired, so to speak, by Hired. And the core product — Py for Work — is now called Hired Assessments. 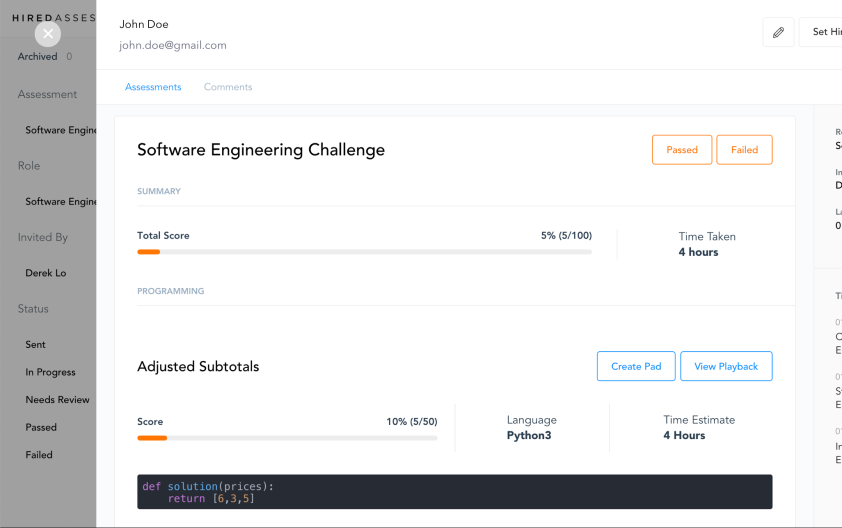 Hired Assessments will incorporate many of the features offered by Py, including coding quizzes, challenges, and the live coding environment. Interestingly, Hired is pitching this product as something that will remove bias from the recruitment process by relying on standardized testing. As many big technology companies are now being scrutinized for issues of bias and representation, this could be a big selling point for Hired customers, such as Dropbox, Booking.com, and Nordstrom.

Hired said it will also allow companies to customize the tests to prioritize specific skill assessments.

“With Py founder Derek Lo, we saw a shared vision for making hiring easier for everyone,” said Hired’s VP of strategic development, Andre Charoo. “For companies, this means helping them hire in-demand talent quickly and predictably, and for job seekers, it is about empowering them to land their dream job. By combining Py’s technical assessment expertise with Hired’s dependable pipeline of first-rate talent, we’re ready to transform today’s hiring standards.”

“Ultimately, Hired Assessments will deliver a more seamless interview process by unlocking time savings for candidates and helping them land their dream job more efficiently than ever,” he said.

Py represents Hired’s fourth known acquisition, after Hired snapped up a triumvirate of companies from the U.S., France, and Australia back in 2017.