Hitman has been reborn as an episodic game. It introduces a whole new “world of assassination,” where you can travel to a new place in each episode and kill the people you meet there. It’s a stealth assassination game, where you have to figure out how to take out a high-value target without being discovered or thwarted.

One of the most innovative things about the high-end console and PC release is that it will have new major episodes and territories debuting throughout 2016. The Square Enix game has traditional multiplayer play, but the new installments are a unique approach to keeping players engaged — offering “assassination tourism.”

The first episode was set in the city of Paris. As Agent 47, I was assigned to assassinate Viktor Novikov, a Russian oligarch who was throwing a fashion show at an elegant palace dubbed the Palais De Walewska. This party had over 300 guests, and the billionaire was under heavy guarded.

Square Enix published the first part of the game on console and PC platforms on March 11, and the second debuts on April 26. The second episode takes place in the fictitious Italian town of Sapienza, a beautiful sun-drenched place on the Amalfi Coast. 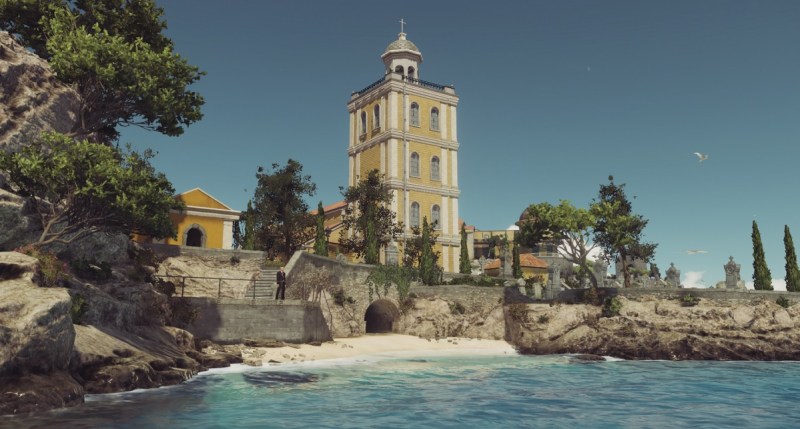 Above: You have to find your way into a mansion to get to your target in Sapienza.

The first episode starts out with a prologue that retells the origins of Agent 47. The bald-headed agent is an intimidating figure, and he has a merciless, nasty, and dirty job. But his targets aren’t exactly sympathetic, and that’s what draws you into viewing him as a kind of anti-hero and pulls you into the fantasy of being a hitman. The prologue takes you back 20 years.

You learn a little bit about Agent 47 as a genetically augmented clone (which is why he has the bar code on the back of his head), and how he almost didn’t make it out of the lab. He excels at training, and one of his female overseers, Diana Burnwood, argues for taking him into the field. She becomes his official “handler.” After you play through this prologue, the game then skips ahead in time to a period after Hitman Absolution, which debuted in 2013.

Once you play the missions in Paris, you can go online and play multiplayer missions known as Contracts. And then you’ll be able to play more each month, coming back to the game for more regions and more of the story. 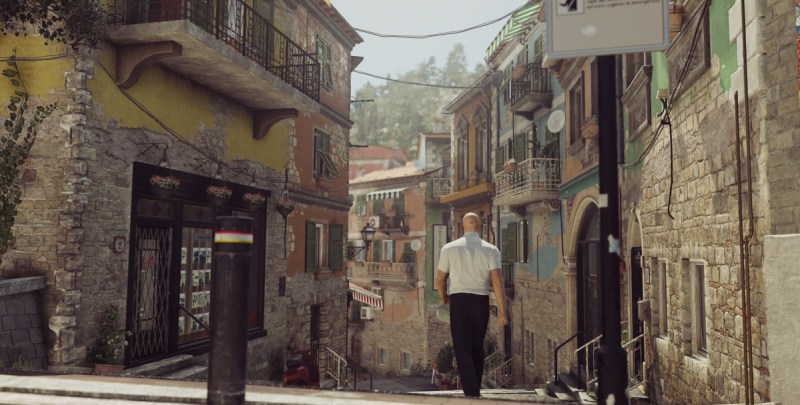 Above: Agent 47 cruises Sapienza to find a way to reach a target.

We had a look at Hitman’s second episode. You start out in a plaza in front of a grand mansion. You have to get inside the mansion and take out the target, a scientist named Silvio Caruso who is creating a dangerous virus. You can’t see the full town, as it is not a full open world city. But you can go down winding streets, enter shops, go to a large piazza by the beach, and check out a church.

“This is a very slow Italian town,” said Hitman’s creative director, Christian Elverdam of developer IO Interactive, in an interview with GamesBeat. “The target is an evil genius. The town has evolved around the family. Silvio’s mother passed away, and he had a complex relation with his mother. The theme is about what lurks below. Both physically, where you have to get down the lab and destroy the virus.”

That’s all you know. Everything else is up to you. You have to express your creativity and figure out how to kill Caruso. A secondary target is the lab head, Francesca De Santis. There are apartments to explore, dungeon-like tunnels, and places inside the mansion where you can scope out the target. He is very well protected by the security forces and the household staff of the mansion.

One easy way into the mansion is one of the first people you run into. There’s a new employee of the kitchen staff. He is late for work. You can go upstairs to his apartment, take him out, steal his uniform and his badge. Then you can move into the mansion through the side door. But there’s a staffer who is very suspicious, and who will report you if you come into her view.

Every room is modeled elaborately. When you get into the kitchen, you introduce yourself to the chef and have to make some spaghetti sauce. This becomes an opportunity to kill Silvio. But it won’t always work as planned. You have to consider poison, but you also have to be wary of getting caught by the kitchen staff. If they report you, a bunch of guards will converge on the kitchen. I managed to get myself killed lots of times, and I never won a shootout once I was discovered. As I noted, it’s all about stealth.

If you look at the trailer below, you’ll see there are all kinds of ways to make the kill. You can go up into a fort tower or the church and use a sniper rifle. You can use disguises or stolen uniforms. You can hide in lockers or bathrooms to avoid detection.

I also found another path into the mansion through a flower delivery van. The van has been in an accident, but the florist needs to deliver the flowers to the mansion for Silvio Caruso to put on his mother’s grave. You can get in the door this way, but there’s a lot to do after that.

Once again, this Hitman is very ambitious and very difficult. You’ll play it lots of times before you discover the ideal way to kill Caruso. That should make it both frustrating and fun.