The value of Twitter when it comes to breaking news and eyewitness reports has been discussed as length (evidenced by CNN’s race to get the most followers, and the buzz surrounding the site’s role in the Iran protests last year), but its impact on the news and media may be overestimated. According to traffic monitoring service Hitwise, Twitter doesn’t even come close to Google News and Facebook when it comes to where people actually get their news.

The micro-blogging site comes in at No. 39 on a list of where people go for breaking stories. Surprisingly, Facebook is No. 3 — a second victory for the site, following yesterday’s revelation that it has surpassed Google as the most visited web site in the U.S. Google News, which seems like it would be the obvious winner, comes in eleventh place. The same report shows that Twitter accounts for less than 0.14 percent of the traffic driven to news and media sites. By comparison, Facebook drives 3.64 percent and Google 1.27 percent of their traffic.

How is this possible if Twitter gets so much acclaim as the quintessential new media news source? Part of it is that breaking news comes from a variety of sources on Twitter, and not all of the tweets mentioning news link back to the “old media” sites it came from. In fact, the majority of Twitter’s upstream traffic is directed to entertainment and social networking sites (60 percent), followed by Search Engines. Another part of it is that Twitter users report news they experience firsthand — many times news that has not yet been reported by established news and media sites.

That said, upstream visits to news and media sites referred from Twitter have grown by 54 percent in just the last year, which isn’t too shabby — but in comparison to the growth for all categories, 138 percent, it’s fairly low. Here’s a look at where people are going when they do go to a news site from Twitter: 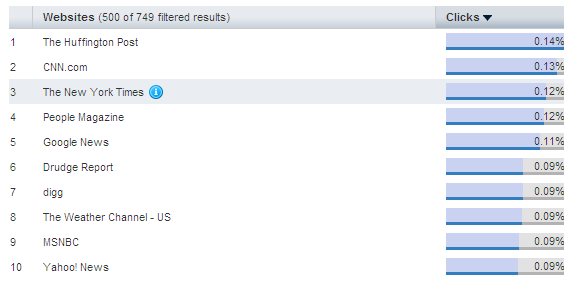