HiveLive, a Boulder, Colo. company developing corporate networking software, has raised $2.2 million in a first round of funding, VentureBeat has learned.

The company raised about $1.6 million in late 2006, said CEO John Kembel, and went out for the rest at the end of 2007. All the funding comes from angel investors.

HiveLive uses social networking technology to allow companies to communicate and market to their customers — and that means it’s trying to take the lead in an incredibly crowded market. Yeah, we’ve been referring a lot to the noise in this market: In August, TechCrunch found 34 companies in this field (not including HiveLive, which was secretive until November) offering to help you build a social network, and many others have emerged since then.

HiveLive’s big innovation, Kembel said, is the “Hive,” the building block of its social network. Other companies offer you the option of adding applications like blogs, wikis, polls and so on to your site, Kembel said, but the “Hive” lets you design your own application. With HiveLive, you can create a blog, but you can also design an application that mixes elements of a blog, a wiki and a poll During a demonstration earlier today, Kembel showed me one such hybrid application, a “Community Product Idea Center,” in which users can pitch new features and rate others’ suggestions. (This, unfortunately for HiveLive, isn’t new, but the novelty of any single application isn’t their selling point.)

That’s a smarter approach, he said, because “any community of depth has a unique twist.” In other words, most companies have specific types of information to share that they normally force into the existing templates. For example, computer scientists need to share code snippets and marketers need to share reports. HiveLive lets them build applications to do that without approaching their IT department or seeking outside technical help, Kembel said. (Seen the screenshot below.) 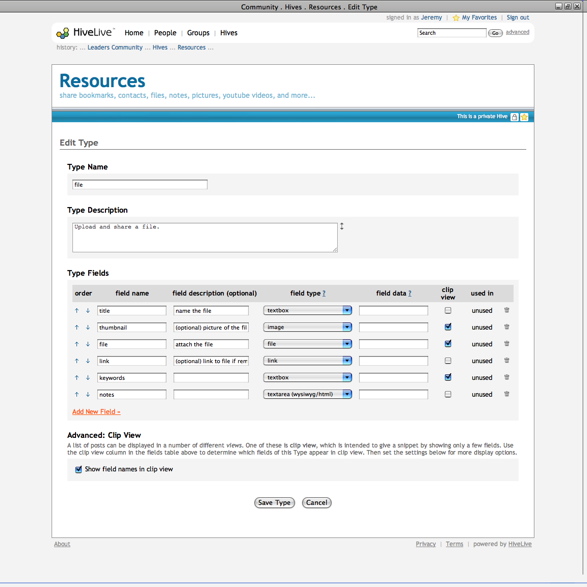 Companies have been using HiveLive’s technology for about a year now. Rally Software used HiveLive build its online community Agile Commons. In January, customer service company Alpine Access announced it will be using HiveLive to coordinate between its 7,500 at-home employees. A few days after the announcement, an Alpine Access-employee had, on their own, already designed a new Craigslist-style marketplace for the company.

During my HiveLive demo earlier today, I didn’t learn enough to say definitively that it’s the easiest-to-use technology out there. But it is easy. In just a few minutes, I watched Kembel assemble an application for pitching story ideas for VentureBeat. Just by going down a list of questions and selecting different options, he created a tool through which VentureBeat writers could enter the basic pitch, rate a story’s importance, enter a deadline, choose from different news beats and upload photos.

Overall, I didn’t see any features in the pages created by HiveLive that I haven’t seen somewhere else on the Web. What the company offers, though, is speed and ease of use. So if you use HiveLive, your Web page may not look that different from other companies’ but you’ll be able to revise and improve it much more quickly and easily.