The gig economy is alive and well, and you don’t have to take our word for it. One estimate pegs the number of U.S. workers who have an “alternative work arrangement” as their primary job at 57 million, contributing to a global freelance and independent contractor market worth $3.7 trillion, according to Staffing Industry Analysts.

HoneyBook is cashing in on the craze with a platform that connects creatives with clients. The San Francisco-based UpWest Labs alum, which offers a financial and business management service for freelancers and “solopreneurs,” today announced that it has raised $28 million in series C funding led by Citi Ventures, with participation from all existing investors, including Norwest Venture Partners and Aleph. This brings its total raised to $74 million, according to Crunchbase, following a $22 million series B in March 2015 and a $10 million series C in June 2016.

CEO Oz Alon, who founded HoneyBook in 2013 with Dror Shimoni, Naama Alon, Alon, and Shadiah Sigala, said the infusion of fresh capital positions the company for growth. “As the future of work changes and many individuals, especially millennials and Gen Z, are choosing self-employment as their preferred lifestyle, we are required to rethink every aspect of the intersection between life and managing a business,” he said. “We and our customers are extremely excited about the potential this investment and partnerships with financial institutions like Citi opens for us to create innovative products and value.”

HoneyBook launched over six years ago as an online wedding album service targeting professional photographers, with organizational tools that enabled freelancers to share photos, music, videos, and other digital media with clients. Like a social network, viewers could favorite and comment on uploads and share their own content through a “guest uploads” section. 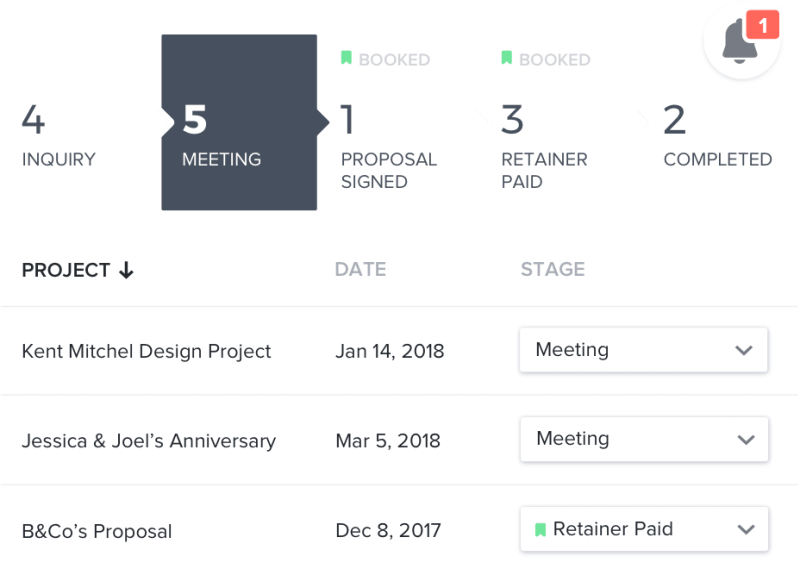 The initial goal was to build a crowdsourced database of wedding vendors, but Alon and colleagues soon decided to broaden the platform’s focus. Now HoneyBook boasts a veritable suite of tools designed to simplify freelancer booking, proposals, and invoicing over a range of verticals. Alon says that bookings surpassed $1 billion across more than a million projects and that HoneyBook’s customer base grew 150 percent in 2018 to reach over tens of thousands of customers and an online community of 75,000.

Here’s how it works: HoneyBook users create profile pages using preconfigured templates. After a client responds and agrees to terms, the parties craft a contract together using an integrated tool that automatically pulls in the relevant details, highlights important fields, and generates a notification when all the paperwork has been reviewed and signed.

HoneyBook’s web dashboard and mobile apps make project files and other key documents shareable and unify text, email, and chat messages in a single view. Meanwhile, its billing platform handles recurring, scheduled, and one-off payments and walks customers through the invoicing, contract, and closure processes. Clients can sign digitally; freelancers can brand most of the workflow with bespoke banners and logos; and HoneyBook’s automation toolset sends reminders via email every step of the way.

Automations extend to the booking flow. Via the aforementioned dashboard, contractors can configure personalized, automatic appointment requests, follow-ups, and “thank you” messages, along with project-specific task reminders and to-do lists.

And there’s a community component: HoneyBook hosts a curated classified ads board where hirers can post and solicit replies about opportunities and ping relevant workers. A search tool lets them drill down by location and expertise or view profile pages highlighting past projects and collaborations.

HoneyBook shares the crowded gig networking space with Fiverr, which recently acquired Phoenix-based ClearVoice, and dozens of others, including Upwork (which filed for an IPO in October), Freelancer.com, and Guru.com (which raised $25 million in December). But Citi Ventures’ Luis Valdich believes HoneyBook’s breadth of features — particularly its automation and contract management tools — put it a cut above the rest.

“As the shift toward independent work continues to rise, the needs of this modern workforce segment are evolving,” he said. “HoneyBook’s holistic platform is uniquely positioned to serve the growing number of creative freelancers who are operating their own businesses, and we are excited to be part of its journey.”

HoneyBook’s subscription plans start at $400 per year ($34 per month) or $40 per month, and include free account training and fraud protection. Two variably priced plans are available for larger teams — Studio and Venue — both with volume discounts on payment processing fees. (Normally, HoneyBook takes a 3 percent cut of every transaction.)