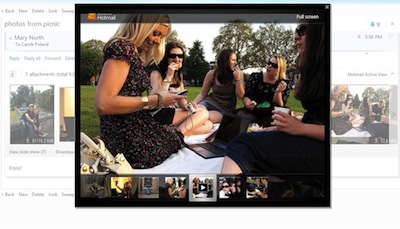 We’ve already discussed the new version of Hotmail that Microsoft demonstrated yesterday, with a focus on how it stacks up against Gmail. But one of the strongest impressions I took away from the presentation wasn’t just the ground that Hotmail might regain from Google and other competitors. If the new application, scheduled to launch this summer, does everything Microsoft hopes, it could also provide a real boost to the software giant’s other services and technologies.

To a certain extent, that’s a natural offshoot of the general approach that the Hotmail team took to the new product — by integrating with other applications, Hotmail makes it easier for users to view and share attachments without leaving. There are some non-Microsoft services on the list, such as Yahoo-owned Flickr, but the most interactive features involve Microsoft’s SkyDrive, where users can now store attachments for future viewing, and with the Web version of Office, where users can share document attachments for editing.

In those two cases, Microsoft spokespeople were quick to emphasize two things. First, if a Hotmail user emails someone, the recipient won’t need a Windows Live account to view document and photo attachments. They’ll only need an account if they want to edit documents and to comment on or upload photos to an album. Second, it a recipient decides to create an account (and obviously, Microsoft hopes some will), the sign-up process after clicking on your email should be very easy.

But even if people just want to view, say, the Flickr slideshow, an Office document, or other media via the slick new attachment viewer, they’ll still need to install one piece of Microsoft software — Silverlight, its technology for Web media and applications.

Windows Live Vice President Chris Jones said Microsoft chose Silverlight because of its “power and availability,” not as a way to drive Silverlight installations. That may be true, but if you consider how many attachments and links you see in a single day, that could dramatically increase the amount of times users will face a prompt to install Silverlight. And that could help push Silverlight, which Microsoft says is installed on nearly 60 percent of Internet-connected computers, towards the numbers seen by Flash, the competing technology from Adobe, which is supposedly installed on 99 percent.

The emphasis on Silverlight also illustrates another difference between Microsoft’s and Google’s strategy. Where Google is emphasizing formats like HTML5, which will work if you view the service on a mobile phone (in fact, Google’s Eric Schmidt said the company now designs for “mobile first”), Microsoft’s Silverlight viewer, and Hotmail in general, are really meant for viewing on your desktop or laptop computer. Jones said that’s because users have already made it clear that they want to access their email from their phone’s built-in applications, not through their mobile Web browser.